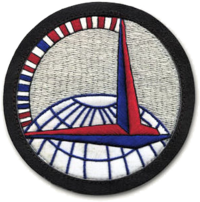 The North Atlantic air ferry route was a series of Air Routes over the North Atlantic Ocean on which aircraft were ferried between the United States and Great Britain during World War II to support combat operations in the European Theater of Operations (ETO).

The route was developed as one of four major routes along which United States aircraft were ferried to the major combat areas. It originated at several Army Air Bases in New England, which permitted short range single-engined aircraft to be flown to Britain using a series of intermediate airfields in Newfoundland, Labrador, Greenland and Iceland. Long-range multi-engined aircraft could be flown from Newfoundland directly using Great Circle routes to airfields in Ireland and southwest England; or via the Azores to the UK or airfields in French Morocco to support Allied air forces in the Mediterranean Theater of Operations (MTO). Later in the war, air routes over the North Atlantic were developed from South Florida via Bermuda to the Azores.

With the outbreak of World War II in Europe, both the British and French governments contacted manufacturers in the United States with regards to purchasing combat aircraft to supplement existing Royal Air Force and Armée de l'Air peacetime forces.[1] [2] [3] [4] [5] As early as 1938 the British had ordered aircraft from American manufacturers and the British Direct Purchase Commission was established in January 1940 in New York. During the 1920s and 1930s, the British Imperial Airways had developed air routes across the British Empire,[6] [7] however air routes between Europe and North America consisted of seaplane service opeated by Pan American airways, using Boeing 314 long-range transatlantic flying boats. Although small airports existed in Newfoundland and Iceland, the only practical way to get the short-range fighter aircraft purchased in the United States by France and Britain to Europe was by cargo ship.

With the Fall of France in June 1940, and the loss of much war materiel on the continent, the need for the British to purchase replacement materiel from the United States was urgent. Aircraft ordered by France and also by the Netherlands were impounded. The aircraft purchased in the United States by Britain were flown to airports in Nova Scotia and Newfoundland, partially dis-assembled and loaded on ships and transported to England where they were unloaded and re-assembled, a process that could take several weeks, not counting any damage to the aircraft incurred in the shipment. In addition, German U-boats operating in the North Atlantic Ocean were a constant menace to shipping routes in the North Atlantic making it very hazardous for merchant shipping between Newfoundland and Great Britain.[8] Larger aircraft could be flown to the UK and the "Atlantic Ferry Organization" was setup to manage this using civilian pilots.

In the summer of 1940, President Roosevelt began negotiating with the British Ambassador to the United States for the American lease of British bases, the "rental" to take the form of fifty over-age destroyers. On 2 September 1940, the Destroyers for Bases Agreement was completed. In exchange for the destroyers, the U. S. got ninety-nine-year leases for air and naval bases in the Dominion of Newfoundland, Bermuda, British Guiana, Antigua, Trinidad, St. Lucia, Jamaica and the Bahamas[9]

While the exchange of destroyers for a string of Atlantic bases was under negotiation, and then, while plans and preparations for developing the new bases were getting under way, Great Britain and Canada were consolidating their position in the North Atlantic by stationing troops in Iceland and were attempting to counter German activities in Greenland.[8]

Neither the United States, nor Canada or Great Britain desired any Nazi facilities or armed forces in Greenland. However, although Iceland was viewed as a part of Europe, Greenland was viewed as part of the North American Continent and Roosevelt felt that the British developing a military presence ran counter to the Monroe Doctrine of no European presence in the Americas. The US Department of State reached an agreement on 9 April 1941 with the Danish Foreign Minister that as a result of the European war there was a danger that Greenland might be converted into a point of aggression against nations of the American Continent by Nazi Germany. The agreement, after explicitly recognizing Danish sovereignty over Greenland, granted to the United States the right to locate and construct aircraft landing fields and other facilities for the defense of Greenland and for the defense of the North American continent. As soon as the agreement with the Danish Government was concluded, President Roosevelt authorized the War Department to go ahead with the preparations for building airfields and other facilities in Greenland. The United States had also taken over the defense of Iceland under an agreement with the Danish and British in July 1941, relieving the British from having to garrison forces there which were needed on the home front and in Egypt battling Rommel in the Western Desert Campaign. United States Army engineers began improving the airstrips previously begun by the British.[10][11]

Using these new airfields in Newfoundland, Greenland and Iceland, land based air routes were developed to transport United States aircraft, soldiers and war supplies between the United States and the United Kingdom

Under the Destroyers for Bases Agreement, the first United States troops arrived in Newfoundland on 29 January 1941. The first USAAF presence in Newfoundland was in May 1941 when six Douglas B-18 Bolos from the First Air Force 21st Reconnaissance Squadron arrived at RCAF Station Gander. As an alternate, the Canadian government in September 1941 began the development of Goose Bay in Labrador.[10][11]

During the preceding July the United States had sent engineers to Narsarsuaq in Greenland for the building of the air base that came to be known as Bluie West 1 (BW-1), which later became the headquarters of the Greenland Base Command. In the following September work began on Bluie West 8, a much more northerly base at Sondrestrom on the western coast of Greenland. On the east coast, an airfield was built at Angmagssalik (Bluie East 2).[12] These airfields, along with airfields in Iceland established an air route of "stepping stones" across the North Atlantic Ocean though which aircraft could be ferried to Great Britain from manufacturing plants in different locations in the United States to Prestwick Airport, near Glasgow, Scotland. This air route was known as the North Atlantic Route, and became one of the major transport and supply routes of World War II.

The winter of 1942-43 presented major problems all along the North Atlantic Route. A high accident rate due to weather was experienced beginning in September 1942 and it continued to climb. On 22 November Air Transport Command suspended the transportation of passengers across the North Atlantic for the duration of the winter. ATC traffic to Great Britain was diverted to the South Atlantic air ferry route in World War II. The distance to Britain by this route was significantly longer than the North Atlantic route, but distance dis-advantage was eclipsed by the fact that operations that could be maintained on a year-round basis.[10]

Efforts on another front were also productive. Prior to 1943 the Portuguese government only allowed German U-boats and navy ships to refuel in the Azores. However, diplomatic efforts in 1943 persuaded Portuguese Prime Minister António de Oliveira Salazar to lease bases on Azores Islands to the British. This represented a change in policy and was a key turning point in the Battle of the Atlantic allowing the Allies to provide aerial coverage in the middle of the Atlantic.[10]

The British established RAF Lagans Field at an existing airport on Terceira Island, and the United States constructed Santa Maria Field on Santa Maria Island. On 1 December 1943, British and United States military representatives at RAF Lagans Field signed a joint agreement outlining the roles and responsibilities for the USAAF and United States Navy use of RAF Lagans Field. In return, the US agreed to assist the British in improving and extending existing facilities at Lagens. Air Transport Command transport planes began landing at Lagens Field immediately after the agreement was signed. On 31 December 1943, Prime Minister Salazar gave his consent to the arrangement with the understanding the Americans would be under British control. By the end of June 1944, more than 1,900 American airplanes had passed through these two airfields in the Azores.[13]

The air routes established allowed long range multi-engined aircraft fitted with auxiliary fuel tanks to be ferried from Morrison Field, in South Florida through Kindley Field, Bermuda to one of the two airfields in the Azores. then on to RAF St Mawgan in Cornwall throughout the year. Single-engine aircraft, however, had to be ferried on the North Atlantic Route due to their shorter ranges. Also aircraft were ferried from Newfoundland via the Azores to Cornwall. This route was subsequently designated as the Mid-Atlantic Route. In addition, ATC ferried aircraft to French Morocco to support forces in the Mediterranean Theater of Operations (MTO) from the Azores.[10][14]

The Crimson Route was a planned Great Circle route to ferry aircraft from manufacturing plants in Southern California via Montana over Canada to Greenland using Sub-Arctic air routes. This route had the advantage of avoiding the poor weather over the North Atlantic by flying over the high latitudes of northern Canada to Greenland, then across Greenland to Iceland and on to Great Britain. Aircraft manufactured in the Midwest and Eastern United States could be flown north over Ontario or Quebec to Greenland as well, avoiding the often stormy North Atlantic. Several airfields were developed in northern Canada, and the route was tested by some RAF aircraft, however the project was ended in 1943 by the development of the Mid-Atlantic Route from Florida to the Azores and never fully developed.[10][11]