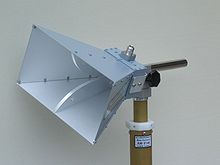 Pyramidal microwave horn antenna, with a bandwidth of 0.8 to 18 GHz. A coaxial cable feedline attaches to the connector visible at top. This type is called a ridged horn; the curving fins visible inside the mouth of the horn increase the antenna's bandwidth.

A horn antenna or microwave horn is an antenna that consists of a flaring metal waveguide shaped like a horn to direct the radio waves. Horns are widely used as antennas at UHF and microwave frequencies, above 300 MHz.[1] They are used as feeders (called feed horns) for larger antenna structures such as parabolic antennas, as standard calibration antennas to measure the gain of other antennas, and as directive antennas for such devices as radar guns, automatic door openers, and microwave radiometers.[2] Their advantages are moderate directivity (gain), low SWR, broad bandwidth, and simple construction and adjustment.[3]

One of the first horn antennas was constructed in 1897 by Indian radio researcher Jagadish Chandra Bose in his pioneering experiments with microwaves.[4] In the 1930s the first experimental research (Southworth and Barrow, 1936) and theoretical analysis (Barrow and Chu, 1939) of horns as antennas was done.[5] The development of radar in World War 2 stimulated horn research. The corrugated horn proposed by Kay in 1962 has become widely used as a feed horn for microwave antennas such as satellite dishes and radio telescopes.[5]

An advantage of horn antennas is that since they don't have any resonant elements, they can operate over a wide range of frequencies, a wide bandwidth. The useable bandwidth of horn antennas is typically of the order of 10:1, and can be up to 20:1 (for example allowing it to operate from 1 GHz to 20 GHz).[1] The input impedance is slowly-varying over this wide frequency range, allowing low VSWR over the bandwidth.[1] The gain of horn antennas ranges up to 25 dBi, with 10 - 20 dBi being typical.[1]

A horn antenna is used to transmit radio waves from a waveguide (a metal pipe used to carry radio waves) out into space, or collect radio waves into a waveguide for reception. It typically consists of a short length of rectangular or cylindrical metal tube (the waveguide), closed at one end, flaring into an open-ended conical or pyramidal shaped horn on the other end.[6] The radio waves are usually introduced into the waveguide by a coaxial cable attached to the side, with the central conductor projecting into the waveguide. The waves then radiate out the horn end in a narrow beam. However in some equipment the radio waves are conducted from the transmitter or to the receiver by a waveguide, and in this case the horn is just attached to the end of the waveguide. In horns installed outdoors, such as the feed horns of satellite dishes, the open mouth of the horn is often covered by a plastic sheet to keep out moisture, which is transparent to the radio waves. 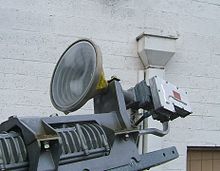 A horn antenna serves the same function for electromagnetic waves that an acoustical horn does for sound waves in a musical instrument such as a trumpet. It provides a gradual transition structure to match the impedance of a tube to the impedance of free space, enabling the waves from the tube to radiate efficiently into space.[7]

If a simple open-ended waveguide were to be used as an antenna, without the horn, the sudden end of the conductive walls causes an abrupt impedance change at the aperture, from the characteristic impedance of the waveguide to the impedance of free space, 377 ohms.[2][8] When radio waves travelling through the waveguide hit the opening, it acts as a bottleneck, reflecting most of the wave energy back down the guide toward the source, so only part of the power is radiated.[9] It acts similarly to an open-circuited transmission line, or to a boundary between optical mediums with a high and low index of refraction, like a glass surface. The reflected waves cause standing waves in the waveguide, increasing the VSWR, wasting energy and possibly overheating the transmitter. In addition, the small aperture of the waveguide (around one wavelength) causes severe diffraction of the waves issuing from it, resulting in a wide radiation pattern without much directivity.

To improve these poor characteristics, the ends of the waveguide are flared out to form a horn. The taper of the horn changes the impedance gradually along the horn's length.[8] This acts like an impedance matching transformer, allowing most of the wave energy to radiate out the end of the horn into space, with minimal reflection. The taper functions similarly to a tapered transmission line, or an optical medium with a smoothly-varying refractive index. In addition, the wide aperture of the horn projects the waves in a narrow beam

The horn shape that gives minimum reflected power is an exponential taper.[8] Exponential horns are used in special applications that require minimum signal loss, such as satellite antennas and radio telescopes. However conical and pyramidal horns are most widely used, because they have straight sides and are easier to fabricate.

The waves travel down a horn as spherical wavefronts, with their origin at the apex of the horn. The pattern of electric and magnetic fields at the aperture plane of the horn, which determines the radiation pattern, is a scaled-up reproduction of the fields in the waveguide. However, because the wavefronts are spherical, the phase increases smoothly from the center of the aperture plane to the edges, because of the difference in length of the center point and the edge points from the apex point. The difference in phase between the center point and the edges is called the phase error. This phase error, which increases with the flare angle, reduces the gain and increases the beamwidth, giving horns wider beamwidths than plane-wave antennas such as parabolic dishes.

At the flare angle, the radiation of the beam lobe is down about -20 dB from its maximum value.[10] 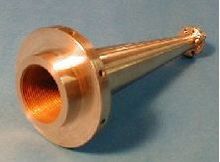 Aperture-limited corrugated horn, used as a feed horn in a radio telescope for millimeter waves.

These are the common types of horn antenna. Horns can have different flare angles as well as different expansion curves (elliptic, hyperbolic, etc.) in the E-field and H-field directions, making possible a wide variety of different beam profiles.

Large pyramidal horn used in 1951 to detect the 21 cm (1.43 GHz) radiation from hydrogen gas in the Milky Way galaxy.

For a given frequency and horn length, there is some flare angle that gives minimum reflection and maximum gain. The reflections in straight-sided horns come from the two locations along the wave path where the impedance changes abruptly; the mouth or aperture of the horn, and the throat where the sides begin to flare out. The amount of reflection at these two sites varies with the flare angle of the horn (the angle the sides make with the axis). In narrow horns with small flare angles most of the reflection occurs at the mouth of the horn. The gain of the antenna is low because the small mouth approximates an open-ended waveguide. As the angle is increased, the reflection at the mouth decreases rapidly and the antenna's gain increases. In contrast, in wide horns with flare angles approaching 90° most of the reflection is at the throat. The horn's gain is again low because the throat approximates an open-ended waveguide. As the angle is decreased, the amount of reflection at this site drops, and the horn's gain again increases.

This discussion shows that there is some flare angle between 0° and 90° which gives maximum gain and minimum reflection.[12] This is called the optimum horn. Most practical horn antennas are designed as optimum horns. In a pyramidal horn, the dimensions that give an optimum horn are:[12][13]

For a conical horn, the dimensions that give an optimum horn are:[12]

Horns have very little loss, so the directivity of a horn is roughly equal to its gain.[1] The gain G of a pyramidal horn antenna (the ratio of the radiated power intensity along its beam axis to the intensity of an isotropic antenna with the same input power) is:[13]

A is the area of the aperture,
d is the aperture diameter of a conical horn
λ is the wavelength,
eA is a dimensionless parameter between 0 and 1 called the aperture efficiency, 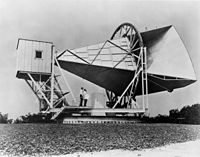 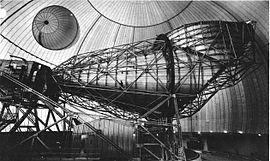 A type of antenna that combines a horn with a parabolic reflector is the Hogg antenna, invented by D. C. Hogg[14] at Bell labs around 1960. It consisted of a horn antenna with a reflector mounted in the mouth of the horn at a 45 degree angle so the radiated beam is at right angles to the horn axis. The reflector is a segment of a parabolic reflector, so the device is equivalent to a parabolic antenna fed off-axis.[15] The advantage of this design over a standard parabolic antenna is that the horn shields the antenna from radiation coming from angles outside the main beam axis, so its radiation pattern has very small sidelobes.[16] Also, the aperture isn't partially obstructed by the feed and its supports, as with ordinary front-fed parabolic dishes.[15] The disadvantage is that it is far larger and heavier for a given aperture area than a parabolic dish, and must be mounted on a cumbersome turntable to be fully steerable. This design was used for a few radio telescopes and communication satellite ground antennas during the 1960s. Its largest use, however, was as fixed antennas for microwave relay links in the AT&T Long Lines microwave network.[16] Since the 1970s this design has been superseded by shrouded parabolic dish antennas, which can achieve equally good sidelobe performance with a lighter more compact construction. Probably the most photographed and well-known example is the 15 meter (50 foot) long Holmdel Horn Antenna at Bell Labs in Holmdel, New Jersey, with which Arno Penzias and Robert Wilson discovered cosmic microwave background radiation in 1965, for which they won the 1978 Nobel Prize in Physics.