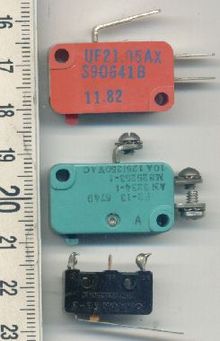 Comparison of some different switches.

A miniature snap-action switch, also trademarked and frequently known as a micro switch, is an electric switch that is actuated by very little physical force, through the use of a tipping-point mechanism, sometimes called an "over-center" mechanism. Switching happens reliably at specific and repeatable positions of the actuator, which is not necessarily true of other mechanisms. They are very common due to their low cost and durability, greater than 1 million cycles and up to 10 million cycles for heavy duty models. This durability is a natural consequence of the design.

The defining feature of micro switches is that a relatively small movement at the actuator button produces a relatively large movement at the electrical contacts, which occurs at high speed (regardless of the speed of actuation). Most successful designs also exhibit hysteresis, meaning that a small reversal of the actuator is insufficient to reverse the contacts; there must be a significant movement in the opposite direction. Both of these characteristics help to achieve a clean and reliable interruption to the switched circuit.

The first micro switch was invented by Peter McGall in 1932 in Freeport, Illinois. McGall was an employee of the Burgess Battery Company at the time. In 1937 he started the company MICRO SWITCH. The company and the Micro Switch trademark has been owned by Honeywell Sensing and Control since 1950.[1] The trademark has become a widely used description for snap-action switches. Companies other than Honeywell now manufacture miniature snap-action switches. 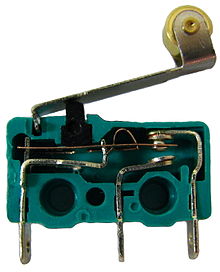 The internals of a micro switch. Contacts, from left to right, are common, normally open, and normally closed.

Internally, a microswitch contains two springs. Both are conductive and carry the current through the switch.

As the flat spring moves downward the upward force of the curved spring reduces causing the motion to accelerate even in the absence of further motion of the actuator until the flat spring impacts the normally-open contact. Even though the flat spring unflexes as it moves downward, the switch is designed so the net effect is acceleration. This "over-center" action produces a very distinctive clicking sound and a very crisp feel.

Common applications of micro switches include the door interlock on a microwave oven, levelling and safety switches in elevators, vending machines, and to detect paper jams or other faults in photocopiers. Micro switches are commonly used in tamper switches on gate valves on fire sprinkler systems and other water pipe systems, where it is necessary to know if a valve has been opened or shut.

Micro switches are very widely used; among their applications are appliances, machinery, industrial controls, vehicles, and many other places for control of electrical circuits. They are usually rated to carry current in control circuits only, although some switches can be directly used to control small motors, solenoids, lamps, or other devices. Special low-force versions can sense coins in vending machines, or with a vane attached, air flow. Micro switches may be directly operated by a mechanism, or may be packaged as part of a pressure, flow, or temperature switch, operated by a sensing mechanism such as a Bourdon tube. In these latter applications, the repeatability of the actuator position when switching happens is essential for long-term accuracy. A motor driven cam (usually relatively slow-speed) and one or more micro switches form a timer mechanism. The snap-switch mechanism can be enclosed in a metal housing including actuating levers, plungers or rollers, forming a limit switch useful for control of machine tools or electrically-driven machinery.