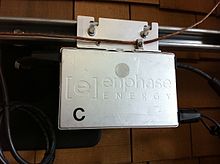 A solar micro-inverter: the Enphase M190 in the process of being installed. The ground wire is attached to the lug and the panel's DC connections are attached to the cables on the lower right. The AC parallel trunk cable runs at the top (just visible).

A solar micro-inverter, also referred as microinverter or micro inverter, converts direct current (DC) from a single solar panel to alternating current (AC). The electric power from several micro-inverters is combined and fed into an existing electrical grid. Micro-inverters contrast with conventional string or central inverter devices, which are connected to multiple solar panels.

Micro-inverters have several advantages over conventional central inverters. The main advantage is that, even small amounts of shading, debris or snow lines in any one solar panel, or a panel failure, does not disproportionately reduce the output of an entire array. Each micro-inverter obtains optimum power by performing maximum power point tracking for its connected panel.

Their primary disadvantages are that they have a higher equipment initial cost per peak watt than the equivalent power in a central inverter, and are normally located near the panel, where they may be harder to maintain. These issues are however surpassed by micro-inverters having much higher durability and simplicity of initial installation.

Micro-inverters that accept DC input from two solar panels, rather than one, are a recent development. They perform independent maximum power point tracking on each connected panel. This reduces the equipment cost and makes PV systems based on micro-inverters comparable in cost with those using string inverters.

Solar panels produce direct current at a voltage that depends on the module's design and the lighting conditions. Modern panels using 6" cells normally contain 60 cells and produce a nominal 30 volts.[1] For conversion into AC, panels are connected in series to produce effectively a single large array with a nominal rating of around 300 to 600 VDC. The power is then run to an inverter, which converts it into standard AC voltage, typically 240VAC/60 Hz for the North American market, or 220VAC/50 Hz in Europe.[2]

The main problem with this "string inverter" approach is that the string of panels will act as if it was a single larger panel rated to the worst of the individual panels within it. For instance, if one panel in a string has 5% higher resistance due to a minor manufacturing defect, the string as a whole will perform 5% worse (or thereabouts). This situation is dynamic; if a panel is shaded its output drops dramatically, affecting the output of the string as a whole even if the other panels are not shaded. Even slight changes in orientation can cause mis-matches in output in this fashion.[3]

Additionally, the efficiency of a panel's output is strongly affected by the load the inverter places on it. In order to maximize production, inverters use a technique known as maximum power point tracking (MPPT) to ensure optimal collection by adjusting the applied load. However, the same issues that cause output to vary from panel to panel affect the proper load that the MPPT system should apply. If a single panel is operating at a different point, a string inverter can only see the overall change, and will move the MPPT point to match. This will result in not just the losses from the shadowed panel, but all of the other panels as well. Shading of as little as 9% of the entire surface array of a PV system can, in some circumstances, lead to a system-wide power loss of as much as 54%.[4][5]

A further problem, although minor, is that string inverters come in a limited selection of power ratings. This means that a given array will normally upsize the inverter to the next-largest model over the rating of the panel array. For instance, a 10-panel array of 2300 W might have to use a 2500 or even 3000 W inverter, paying for conversion capability it cannot use. This same effect makes it difficult to change array sizes over time, adding power when funds are available. With micro-inverters, different ratings of solar panels can be added to an array even if they don't match the original types.

Other challenges associated with centralized inverters include the space required to locate the device, as well as heat dissipation requirements. Large central inverters are typically actively cooled. Cooling fans make noise, so location of the inverter relative to offices and occupied areas must be considered.

Micro-inverters are small inverters rated to handle the output of a single panel. Modern grid-tie panels are normally rated between 220 and 245 Watts, but rarely produce this in practice, so micro-inverters are typically rated between 190 and 220 W. Because it is operated at this lower power point, many design issues inherent to larger designs simply go away; the need for a large transformer is generally eliminated, large electrolytic capacitors can be replaced by more reliable thin-film capacitors, and cooling loads are so reduced that no fans are needed. Mean time between failures (MTBF) are quoted in the hundreds of years.[6]

More importantly, a micro-inverter attached to a single panel allows it to isolate and tune the output of that panel. A dual micro-inverter does this for two panels. For example, in the same 10-panel array used as an example above, with micro-inverters any panel that is under-performing will have no effect on the panels around it. In that case, the array as a whole will produce as much as 5% more power than it would with a string inverter. When shadowing is factored in, if present, these gains can become considerable, with manufacturers generally claiming 5% better output at a minimum, and up to 25% better in some cases.[6]

Micro-inverters produce grid-matching power directly at the back of the panel. Arrays of panels are connected in parallel to each other, and then to the grid feed. This has the major advantage that a single failing panel or inverter will not take the entire string offline. Combined with the lower power and heat loads, and improved MTBF, it is suggested that overall array reliability of a micro-inverter-based system will be significantly greater than a string-inverter based one. This assertion is supported by longer warranties, typically 15 to 25 years, compared with 5 or 10 year warranties that are more typical for string inverters. Additionally, when faults occur, they are identifiable to a single point, as opposed to an entire string. This not only makes fault isolation easier, but unmasks minor problems that might never become visible otherwise - a single underperforming panel may not affect a short string's output enough to be noticed.

The main disadvantage of the micro-inverter concept has, until recently, been cost. Because each panel has to duplicate much of the complexity of a string inverter, the costs are marginally greater. This offsets any advantage in terms of simplification of the individual components. As of October 2010, a central inverter costs approximately $0.40 per watt, whereas a micro-inverter costs approximately $0.52 per watt.[7] Like string inverters, economic considerations force manufacturers to limit the number of models they produce; most produce a single model that may be over- or under-size when matched with a particular panel. With steadily decreasing prices, the introduction of dual micro-inverters that accept DC input from two solar panels, and the advent of wider [8] model selections to match PV module output more closely, cost is less of an obstacle so micro-inverters may now spread more widely. In 2011, the introduction of dual micro inverters, that accept DC input from two solar modules, rather than one, reduced equipment costs to the extent that PV systems based on this kind of micro-inverter are comparable in cost with those using string inverters.

Micro-inverters have become common where array sizes are small and maximizing performance from every panel is a concern. In these cases the differential in price-per-watt is minimized due to the small number of panels, and has little effect on overall system cost. The improvement in energy collection given a fixed size array can offset this difference in cost. For this reason, micro-inverters have been most successful in the residential market, where the limited space for panels constraints the array size, and shading from nearby trees or other homes is often an issue. Micro-inverter manufacturers list many installations, some as small as a single panel and the majority under 50.[9]

The microinverter concept has been in the solar industry since its inception. However, flat costs in manufacturing, like the cost of the transformer or enclosure, scaled favorably with size and meant that larger devices were inherently less expensive in terms of price per watt. Small inverters were available from companies like ExcelTech and others, but these were simply small versions of larger designs with poor price performance and were aimed at niche markets. 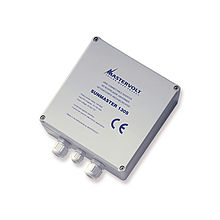 Released in 1993, Mastervolt's Sunmaster 130S was the first true micro-inverter. 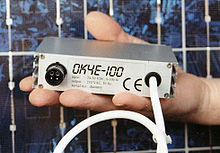 In 1991 the US company Ascension Technology started work on what was essentially a shrunken version of a traditional inverter, intended to be mounted on a panel to form an "AC panel". This design was based on the conventional linear regulator, which is not particularly efficient and dissipates considerable heat. In 1994 they sent an example to Sandia Labs for testing.[10] In 1997, Ascension partnered with US panel company ASE Americas to introduce the 300 W SunSine panel.[11]

Design of what would today be recognized as a "true" microinverter traces its history to late 1980s work by Werner Kleinkauf at the Institut für Solare Energieversorgungstechnik (ISET). These designs were based on modern high-frequency switching power supply technology, which is much more efficient. His work on "module integrated converters" was highly influential, especially in Europe.[12]

In 1993 Mastervolt introduced their first grid-tie inverter, the Sunmaster 130S, based on a collaborative effort between Shell Solar, Ecofys and ECN. The 130 was designed to be mounted directly to the back of the panel, connecting both AC and DC lines using compression fittings. In 2000 the 130 was replaced by the Soladin 120, a micro-inverter in the form of a AC adapter that allows panels to be connected simply by plugging them into any wall socket.[13]

In 1995, OKE-Services designed a new high-frequency version with improved efficiency, which was introduced commercially as the OK4-100 in 1995 by NKF Kabel, and re-branded for US sales as the Trace Microsine.[14] A new version, the OK4All, improved efficiency and had wider operating ranges.[15]

In spite of this promising start, by 2003 most of these projects had ended. Ascension Technology was purchased by Applied Power Corporation, a large integrator. APC was in turn purchased by Schott in 2002, and SunSine production was canceled in favor of Schott's existing designs.[16] NKF ended production of the OK4 series in 2003 when a subsidy program ended.[17] Mastervolt has moved on to a line of "mini-inverters" combining the ease-of-use of the 120 in a system designed to support up to 600 W of panels.[18]

Since 2009, several companies from Europe to China, including major central inverter manufacturers, have launched micro-inverters validating the micro-inverter as an established technology and one of the biggest technology shifts in the PV industry in recent years.[20]