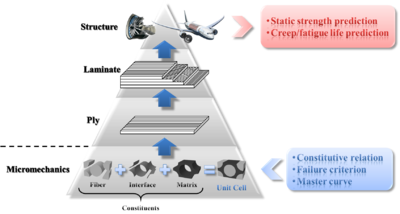 Micro-Mechanics of Failure (MMF) is a newly proposed methodology, providing a more logical explanation of failure mechanism of continuous fiber reinforced composites than other phenomenological models such as Tsai-Wu[1] and Hashin[2][3] failure criteria. The basic concept of MMF is to perform failure analysis of fiber reinforced composites, based upon micro stresses in each constituent (fiber, matrix, and fiber-matrix interface) calculated from macro stresses at the ply level.[4] The hierarchy of micromechanics-based analysis procedure for composite structures is shown in Figure 1: starting from mechanical behavior of constituents, i.e., the fiber, the matrix, and the interface, the mechanical behavior of a ply, a laminate, and eventually a structure, can be predicted. At the constituent level, three elements are required to fully characterize each constituent: 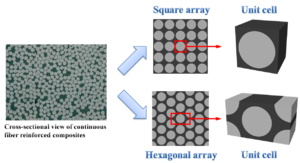 Starting from the constituent level, it is necessary to devise a proper method to organize all three constituents such that the microstructure of a UD lamina is well-described. In reality, all fibers in a UD ply are aligned longitudinally; however, in the cross-sectional view, the distribution of fibers is random(Figure 2), and there is no distinguishable regular pattern in which fibers are arrayed. To avoid such a complication cause by the random arrangement of fibers, an idealization of the fiber arrangement in a UD lamina is performed, and the result is the regular fiber packing pattern. Two regular fiber packing patterns are considered: the square array and the hexagonal array (Figure 2). Either array can be viewed as a repetition of a single element, named unit cell or representative volume element (RVE), which consists of all three constituents. With periodical boundary conditions applied,[5] a unit cell is able to respond to external loadings in the same way that the whole array does. Therefore, a unit cell model is sufficient in representing the microstructure of a UD ply.

at any point within fiber/matrix, and micro surface tractions

at any interfacial point, are related to ply stresses

as well as temperature increment ΔT through[6] :

are columm vectors with 6, 6, and 3 components, respectively. Subscripts serve as indications of constituents, i.e. f for fiber, m for matrix, and i for interface.

has the dimension of 6×1; for an interfacial point, respective dimensions of

are 3×6 and 3×1. The value of each single term in the SAF for a micro material point is determined through FEA of the unit cell model under given macroscopic loading conditions. The definition of SAF is valid not only for constituents having linear elastic behavior and constant coefficients of thermal expansion (CTE), but also for those possessing complex constitutive relations and variable CTEs.

Stresses used in two preceding criteria should be micro stresses in the fiber, expressed in such a coordinate system that 1-direction signifies the longitudinal direction of fiber.

The polymeric matrix is assumed to be isotropic and exhibits a higher strength under uniaxial compression than under uniaxial tension. A modified version of von Mises failure criterion suggested by Christensen[7] is adopted for the matrix:

Tm and Cm represent matrix tensile and compressive strength, respectively; whereas σMises and I1 are von Mises equivalent stress and the first stress invariant of micro stresses at a point within matrix, respectively.

The fiber-matrix interface features traction-separation bahavior, and the failure criterion dedicated to it takes the following form[8] :

where tn and ts are normal (perpendicular to the interface) and shear (tangential to the interface) interfacial tractions, with Yn and Ys being their corresponding strengths. The angle brackets (Macaulay brackets) imply that a pure compressive normal traction does not contribute to interface failure.

Comparison between MMF and other failure criteria 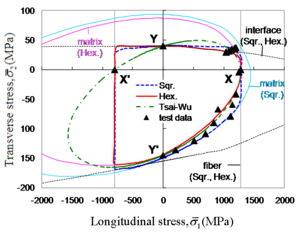 Endeavors have been made to incorporate MMF with multiple progressive damage models and fatigue models for strength and life prediction of composite structures subjected to static or dynamic loadings.