There are nine universities and a few dozen colleges in Israel and in Israeli settlements, as recognized and academically supervised by the Council for Higher Education in Israel. The main difference between a university and a college in Israel is that only a university can confer doctorate degrees, and are therefore more research-oriented than the teaching-oriented colleges.

Israel's official universities are listed below, followed by their English acronym (if commonly used), internet domain, establishment date, latest data about the number of students and the institute's academic rank of the top world universities, according to WebOMetrics (top 3000), Shanghai Jiao Tong University (SJTU) (top 500) and The Times Higher Education Supplement (THES) (top 200):

Most Universities offer the full range of graduate and undergraduate degrees – bachelor, master and doctor. However, the Weizmann Institute does not offer bachelor's degrees, and the Open University does not offer doctorates.

In 2005 Israeli government had voted for establishment of a new university in the Galilee (unanimously)[1] and to change the status of the College of Judea and Samaria in Ariel, to a university, by a 13-7 margin.[2] Now, the latter calls itself the Ariel University Center of Samaria, and the former has been mentioned again by Shimon Peres in his speech on the 7-th Herzliya conference in 2007.[3] Both Minister of Education at the time of decision Yuli Tamir and the Council for Higher Education have vowed to block it,[4] with the council announcing in 2008 that they would not recognize degrees awarded by the college.[5]The name change was recognised in 2010. 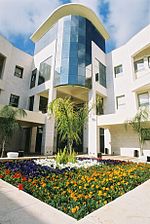 Other institutes of higher-learning that are accredited by CHEI to confer a Bachelor's (and in some cases also a Master's) degree are called "Colleges" (Hebrew: מִכְלָלָה‎‎ Mikhlala; pl. מכללות Mikhlalot). There are also over twenty teacher training colleges or seminaries, most of which may award only a Bachelor of Education (B.Ed.) degree.