The Michigan Theater is a movie palace in Ann Arbor, Michigan in the United States of America. It shows independent films, stage productions and musical concerts. 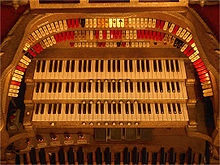 During a renovation in 1956, many of the original ornate designs were destroyed. After a period of low attendance, the theater was threatened with demolition in 1978, but members of the community and local organists helped raise funds to save and renovate the theater, returning it to its original design. A second screen with a state-of-the-art sound system, seating for 200 and the ability to project films digitally was added in 1999.

The Barton Opus 245 theatre pipe organ was built for the Michigan Theater and installed in November 1927 shortly before the theater was opened. It is one of the few remaining organs which exists in its original location. It has three manuals (keyboards), thirteen separate ranks of pipes and the console is situated on a functioning Barton four-poster lift. The instrument has been fully restored and has retained all of its original electropneumatic operating systems. No portion of it has been digitized and no such modification is planned. The instrument is professionally maintained and played daily prior to most film screenings, making it one of the most heard theater organs in the country.[2]

The Michigan Theater is the current home of the annual Ann Arbor Film Festival, the Ann Arbor Symphony,and the Ann Arbor Concert Band, and has been named 2006 Outstanding Historic Theatre by the League of Historic American Theaters. The theater also hosts a series of children's stage productions entitled "Not Just For Kids" and a concert series entitled "The Legends of Rock & Roll." 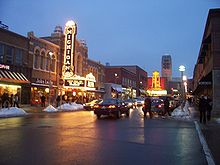