Burton Michael Robinson (born February 6, 1983) is an American football running back for the Seattle Seahawks of the National Football League. He was drafted in the 4th round (100th overall) by the 49ers in the 2006 NFL Draft. He played college football at Penn State.

He played quarterback and wide receiver in college at Penn State, leading the team to a Big Ten Conference title in 2005 and winning the Big Ten Offensive Player of the Year in 2005. He also won the Chicago Tribune Silver Football as the Big Ten's MVP.

Robinson led his team to four consecutive regional titles and two state runner-up finishes. He rushed for 3,046 yards on 371 carries, an impressive 8.2 average, and 37 touchdowns, while passing for 2,409 yards in his career.

As a senior, he accounted for a huge portion of the team's total offense, passing for 1,056 yards and rushing for 1,281 and scored 15 touchdowns. He was two-year team captain, who totaled 211 career tackles, 18 interceptions and 13 sacks as a safety. He also participated in the sprints for the track and field squad. 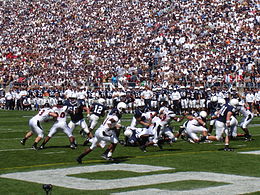 Number 12 Michael Robinson breaks left during the 2005 Penn State football game versus the University of Cincinnati at Beaver Stadium.

In 2002, Robinson shifted around the offensive set from quarterback to running back, slot back and split end to utilize his talents. He showed great running ability and helped spark the diversified Penn State offense. He started at tailback against Michigan and at slot back against Auburn in the Capital One Bowl. Robinson was Penn State's second leading rusher in 2002 with 263 yards and six touchdowns on 50 carries. He caught nine passes for 44 yards.

In 2003 with the Nittany Lions, Robinson started eight games—three at quarterback and five at tailback. He completed 62-of-138 passes for 892 yards, five touchdowns and five interceptions and finished second on the team with 396 yards and three scores on 107 carries.

In 2005, Robinson compiled the best numbers of his college career. He was named Big Ten Conference Offensive Player of the Year by the league’s coaches and was a consensus second-team All-Big Ten choice. He was named to the Maxwell Award watch list and was a semi-finalist for the Davey O'Brien Award, given to the nation’s top passer. He completed 162 of 311 passes (52.1%) for 2,350 yards, seventeen touchdowns and ten interceptions. His 2,350 passing yards at the time ranked fifth on the school season-record list, topped only by Zack Mills (2,417 in 2002), Tony Sacca (2,488 in 1991), Anthony Morelli (2,651 in 2007) and Kerry Collins (2,679 in 1994). He was second on the team with 163 carries for 806 yards (4.9 avg) and eleven touchdowns, becoming the first player in school history to throw for over 2,000 yards and rush for over 500 yards in the same season. 806 yards set a school season-record for quarterbacks and became the first quarterback in Penn State history to run for at least ten touchdowns in a season. His 28 touchdowns (17 passing, 11 rushing) was one shy of the school season-record of 29 (26 rushing, 3 catching) by Lydell Mitchell in 1971. Robinson also became the first Nittany Lion to throw three touchdown passes in three separate games during the same season since Todd Blackledge in 1982.

Robinson captained the 2005 team that was one of Penn State's most competitive teams in years, winning the Big Ten championship and the Orange Bowl. He finished 5th in Heisman voting. 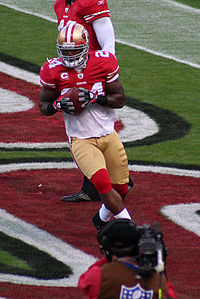 Robinson with the 49ers.

Robinson was drafted in the 4th round of the 2006 NFL Draft by the San Francisco 49ers. The 49ers converted him into a running back. 49ers head coach Mike Nolan was immediately impressed with Robinson's attitude and toughness during training camp. After a solid preseason, Robinson rose up to the number two running back position behind Frank Gore on the depth chart. After Robinson scored his first and second career touchdown against the Philadelphia Eagles in week 3, Mike Nolan indicated that he intended to use Robinson more often in goal line situations. Despite Nolan's statement, Robinson's playing time actually would decrease over the course of the season, and he did not score another touchdown. He finished the year with 38 carries for 116 yards, 9 receptions for 47 yards, and 2 touchdowns.

Midway through the 2008 season, Robinson took over as the 49er's starting fullback position after teammate Zak Keasey suffered a season ending tear in his biceps.

Robinson was released by San Francisco on September 3, 2010 at the end of the 2010 preseason. He was signed September 6, 2010, by the Seattle Seahawks at the urging of first-year assistant special teams coach and former 49ers player, Jeff Ulbrich, who had been Robinson’s teammate for the previous four seasons.[1]

During his rookie season in San Francisco, Robinson started his own sports talk show, "The Rookie Report," which later evolved into "The Robinson Report". During the 2011 NFL lockout, Mike decided to bring back the show, this time as "The Real Robinson Report", taking his show beyond just the locker room. "The Real Robinson Report" features professional athletes and sports fans alike. Notable guests include Donovan McNabb, Darrelle Revis, Amar'e Stoudemire, Nikolai Khabibulin, and Tim Hightower. The show's slogan is "By Athletes For The Fans".