Michael Christopher McDowell (born December 21, 1984 in Glendale, Arizona)[1] is an American race car driver. He currently drives the #66 Toyota Camry for HP Racing in the NASCAR Sprint Cup Series and the #18 Pizza Ranch Toyota Camry part-time for Joe Gibbs Racing in the NASCAR Nationwide Series. He married Jami (his junior high school sweetheart) in 2005 and they have one son.[citation needed]

Michael started out his career at the age of three racing BMX bicycles. He would always win his division because there were not any other three or four year olds to compete against. At the start of each race, someone would have to hold him in the starting gate because his feet did not reach the ground. Then, when Michael was eight years old, he moved to karting with help from his mother Tracy, his father Bill, and his older brother Billy, who were all avid race fans. After ten years in karts, he would win not only the World Karting Association championship, but he would also take back to back undefeated International Karting Federation championships, along with 18 consecutive feature wins.

From karts Michael moved into Formula Renault with World Speed Motorsports in 2002 and won the Infineon Raceway, Las Vegas, and Firebird International Raceway events in his rookies season. Moving up the ladder, Michael would move to the Star Mazda Series in 2003. He took victories at Sebring and Road America en route to a runner-up finish in the points. Michael won seven races in 2004 en route to winning the series championship. McDowell would be picked up by Champ Car team Rocketsports for Surfer's Paradise and Mexico City, but decided to move on in 2005 to the Grand-Am Cup Series.

During his run for the Star Mazda championship, Michael would meet businessman Rob Finlay at the Bob Bondurant School of High Performance Driving, where McDowell was an instructor. McDowell and Finlay soon established a partnership, and McDowell would drive his first sports car, a Porsche 996 in the Grand-Am Cup Series for Finlay Motorsports. In 2005, Michael would stay at Finlay, but would move up to the Rolex Sports Car Series, joining with veteran Memo Gidley in a BMW powered Riley sponsored by the Make A Wish Foundation. Together, they would finish sixth in the overall points and take the team's first victory at Mexico City. Michael made history by not only becoming the youngest driver to stand on podium for a Grand-Am race at Barber Motorsports Park,[citation needed] but he also became the first driver since the great Mario Andretti to compete in both an open wheel race and a sports car race in the same weekend.[citation needed] Michael would also drive the team's #60 BMW M3 in the Grand-Am Cup series to a podium finish at Daytona. McDowell would stick with Finlay for 2006, and was again partnered with Gidley. The duo would improve to fourth in points despite being winless. Michael would also drive a #15 Ford Mustang with owner Finlay, driving the car to a win at Barber. He would cap off his Grand-Am years with a second place finish at Miller Motorsports Park.

Unfortunately, in early 2006, Michael's mother Tracy died in January after battling cancer for a year. She was only 45. Even with having to deal with this tragedy at such an early age, Michael continued to work towards his dream. Michael's accolades and talent impressed many teams, and ARCA RE/MAX Series owner Eddie Sharp would put him behind the wheel of his #2 Dodge for five races of the 2006 season, starting with the Governor's Cup 200 at the Milwaukee Mile. Although he scored a 34th place finish, McDowell stayed near the front of the pack. McDowell scoring a sixth place finish at Salem, fifth at Talladega, and fourth at Iowa. Considering his quick adaptation to all three tracks which he had never seen before, drivers quickly gave Michael the nickname of "The Natural".[citation needed] Michael would return to ESR to run the full schedule for Rookie of the Year honors. During the first third of the season, Michael was seen as a bridesmaid driver who had the potential to win but did not have enough luck. McDowell was involved in controversy at Toledo when his ESR teammate, Ken Butler III spun him late in the race. Butler would take his first win while Michael would rally for a top ten finish. Michael would drop his bridesmaid status with his first stock car win at Kentucky Speedway. He followed that up with wins at Pocono, Chicago, and the season finale at Toledo. Although Michael was in contention for the ARCA Re/Max Seroes championship all season long, he was unable to pose a serious threat to Frank Kimmel for Kimmel's ninth championship. Michael would score a second place finish in the points along with Rookie of the Year honors, as well as scoring nine pole positions during the season. As McDowell moved to NASCAR, his ESR ride was taken over by former Formula One driver Scott Speed.

Michael would make his NASCAR debut in the Craftsman Truck Series. Driving the #17 for Darrell Waltrip Motorsports, Michael would qualify 29th and finish 30th after a late wreck. Michael moved to the Busch Series as a developmental driver for Sprint Cup Series team Michael Waltrip Racing. Driving the #00 Toyota, Michael drove at Texas, Phoenix, and Homestead, finishing 20th, 14th, and 32nd. McDowell was chosen to drive the #00 Cup Series car in 2008 after Dale Jarrett's retirement; David Reutimann replaced Jarrett in the #44 UPS car. Michael started 34th and finished 26th in his Sprint Cup debut, the Goody's Cool Orange 500, after a flat tire near the end of the race. After the race, he was criticized by veteran driver Jeff Burton for him blocking Burton's way to leader Denny Hamlin near the end of the race (McDowell was racing for the Lucky Dog free pass, which Burton did not realize at the time of is comments). In early August 2008, McDowell was pulled from the #00 Toyota Camry Sprint Cup car in favor of veteran NASCAR driver Mike Skinner for three races. Skinner helped evaluate the team's progress, while trying to get the #00 into the top 35 in owner points. Skinner wasn't able to do any better than McDowell, actually he did worse, and he contended that it was the equipment and not the driver, so McDowell returned to the ride at Richmond on September 6, 2008. McDowell was again pulled from the #00 Toyota Camry when he failed to qualify for the Camping World RV 400 at Kansas on September 28. McDowell's contract was not renewed by MWR for 2009, when Michael Waltrip decided not to retire and the team did not have sponsorship for another car. 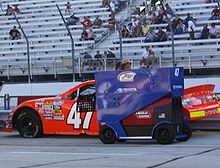 In 2009, McDowell drove a part-time schedule for JTG Daugherty Racing in the NASCAR Nationwide Series. His happiest moment came on February 25, 2009 when his first child, Trace Christopher McDowell was born. Trace was named after Michael's late mother, Tracy. The baby boy was 7 pounds, 7 ounces and born at 7:00am on the dot. Ironically, the new father's next race was three days later in Las Vegas, the place where you hope for 7 7 7. After this happy event, McDowell attempted the April 2009 race at Talladega for Prism Motorsports in the Sprint Cup Series, as regular driver Dave Blaney had a family obligation. After JTG Daugherty Racing ran out of sponsorship support after the second race at Daytona International Speedway, it was announced that he would drive the next two races for MacDonald Motorsports. He also competed a few races with Tommy Baldwin Racing in the #36 Toyota Camry. Even with switching between so many new cars and teams, Michael remained in the top 10 for most of the season. McDowell also competed in the Camping World Truck Series in 2009 for ThorSport Motorsports driving the #98 Chevy Silverado.

In 2010, McDowell started the season for Prism Motorsports. He drove the #55 car, then moved to the #46 team of Whitney Motorsports. In 2011 he will drive the #66 Toyota for HP Racing in the Sprint Cup Series. In the Nationwide Series he will race at least two races for Joe Gibbs Racing. He will drive the #18 Pizza Ranch Toyota in both races at Iowa Speedway. JGR also added the Bucyrus 200 at Road America to McDowell's schedule, leaving open the possibility of more races added.

McDowell's destroyed racecar after the crash being taken away

While performing a qualifying attempt for the 2008 Samsung 500 at Texas Motor Speedway on April 4, 2008 McDowell had a very frightening accident that was strikingly similar to that of another racer with a road-racing background; Gordon Smiley (who died in a crash during time trials in 1982). McDowell's right front sway bar broke entering Turn 1, which caused the car to hit the SAFER barrier almost head on at approximately 165 miles per hour (266 km/h), according to data obtained and reported by SPEED channel (165 mph to zero mph in one foot, as reported by SPEED's Bob Dillner, before reaccellerating the other direction). The car spun around once while tipping onto its roof, and then barrel-rolled 8 times with fire coming out of the engine compartment, shedding debris everywhere, until coming to a stop back onto its tires.[2] A huge dark mark was seen on the SAFER barrier, which showed how hard the car hit the barrier, which had to be repaired (the barrier moved inward when the car hit it), and as a result, qualifying for the race was delayed by an hour. The safety features of the barrier, the HANS device and the Car of Tomorrow racecar protected him.[2] Because of this, he fortunately walked away from the completely devastated car without injury, and waved to the stunned crowd.[2] After this event, all criticisms of the Car of Tomorrow's safety standards ended, as this crash proved once and for all that the safety features of the car are vastly improved from the old car.[2] Since his old car was destroyed, he had to switch to a backup, and ended up starting at the back of the pack in the race.