Ant behavior was the inspiration for the metaheuristic optimization technique.

In computer science and operations research, the ant colony optimization algorithm (ACO) is a probabilistic technique for solving computational problems which can be reduced to finding good paths through graphs.

This algorithm is a member of ant colony algorithms family, in swarm intelligence methods, and it constitutes some metaheuristic optimizations. Initially proposed by Marco Dorigo in 1992 in his PhD thesis,[1][2] the first algorithm was aiming to search for an optimal path in a graph, based on the behavior of ants seeking a path between their colony and a source of food. The original idea has since diversified to solve a wider class of numerical problems, and as a result, several problems have emerged, drawing on various aspects of the behavior of ants.

In the natural world, ants (initially) wander randomly, and upon finding food return to their colony while laying down pheromone trails. If other ants find such a path, they are likely not to keep travelling at random, but to instead follow the trail, returning and reinforcing it if they eventually find food (see Ant communication).

Over time, however, the pheromone trail starts to evaporate, thus reducing its attractive strength. The more time it takes for an ant to travel down the path and back again, the more time the pheromones have to evaporate. A short path, by comparison, gets marched over more frequently, and thus the pheromone density becomes higher on shorter paths than longer ones. Pheromone evaporation also has the advantage of avoiding the convergence to a locally optimal solution. If there were no evaporation at all, the paths chosen by the first ants would tend to be excessively attractive to the following ones. In that case, the exploration of the solution space would be constrained.

Thus, when one ant finds a good (i.e., short) path from the colony to a food source, other ants are more likely to follow that path, and positive feedback eventually leads all the ants following a single path. The idea of the ant colony algorithm is to mimic this behavior with "simulated ants" walking around the graph representing the problem to solve. 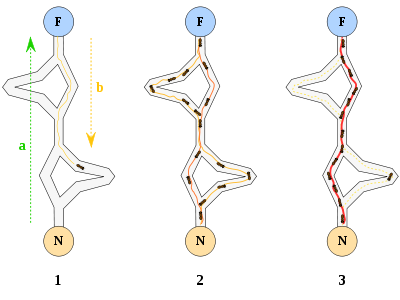 The original idea comes from observing the exploitation of food resources among ants, in which ants’ individually limited cognitive abilities have collectively been able to find the shortest path between a food source and the nest.

In a series of experiments on a colony of ants with a choice between two unequal length paths leading to a source of food, biologists have observed that ants tended to use the shortest route. [3] [4] A model explaining this behaviour is as follows:

Ants use the environment as a medium of communication. They exchange information indirectly by depositing pheromones, all detailing the status of their "work". The information exchanged has a local scope, only an ant located where the pheromones were left has a notion of them. This system is called "Stigmergy" and occurs in many social animal societies (it has been studied in the case of the construction of pillars in the nests of termites). The mechanism to solve a problem too complex to be addressed by single ants is a good example of a self-organized system. This system is based on positive feedback (the deposit of pheromone attracts other ants that will strengthen it themselves) and negative (dissipation of the route by evaporation prevents the system from thrashing). Theoretically, if the quantity of pheromone remained the same over time on all edges, no route would be chosen. However, because of feedback, a slight variation on an edge will be amplified and thus allow the choice of an edge. The algorithm will move from an unstable state in which no edge is stronger than another, to a stable state where the route is composed of the strongest edges.

The basic philosophy of the algorithm involves the movement of a colony of ants through the different states of the problem influenced by two local decision policies, viz., trails and attractiveness. Thereby, each such ant incrementally constructs a solution to the problem. When an ant completes a solution, or during the construction phase, the ant evaluates the solution and modifies the trail value on the components used in its solution. This pheromone information will direct the search of the future ants. Furthermore, the algorithm also includes two more mechanisms, viz., trail evaporation and daemon actions. Trail evaporation reduces all trail values over time thereby avoiding any possibilities of getting stuck in local optima. The daemon actions are used to bias the search process from a non-local perspective.

Here are some of most popular variations of ACO Algorithms

The global best solution deposits pheromone on every iteration along with all the other ants.

It has been presented above.[6]

All solutions are ranked according to their length. The amount of pheromone deposited is then weighted for each solution, such that solutions with shorter paths deposit more pheromone than the solutions with longer paths.

The pheromone deposit mechanism of COAC is to enable ants to search for solutions collaboratively and effectively. By using an orthogonal design method, ants in the feasible domain can explore their chosen regions rapidly and efficiently, with enhanced global search capability and accuracy.

The orthogonal design method and the adaptive radius adjustment method can also be extended to other optimization algorithms for delivering wider advantages in solving practical problems.[7]

For some versions of the algorithm, it is possible to prove that it is convergent (i.e. it is able to find the global optimum in a finite time). The first evidence of a convergence ant colony algorithm was made in 2000, the graph-based ant system algorithm, and then algorithms for ACS and MMAS. Like most metaheuristics, it is very difficult to estimate the theoretical speed of convergence. In 2004, Zlochin and his colleagues[8] showed that COA-type algorithms could be assimilated methods of stochastic gradient descent, on the cross-entropy and estimation of distribution algorithm. They proposed these metaheuristics as a "research-based model".

An ant is a simple computational agent in the ant colony optimization algorithm. It iteratively constructs a solution for the problem at hand. The intermediate solutions are referred to as solution states. At each iteration of the algorithm, each ant moves from a state x to state y, corresponding to a more complete intermediate solution. Thus, each ant k computes a set Ak(x) of feasible expansions to its current state in each iteration, and moves to one of these in probability. For ant k, the probability

of moving from state x to state y depends on the combination of two values, viz., the attractiveness ηxy of the move, as computed by some heuristic indicating the a priori desirability of that move and the trail level τxy of the move, indicating how proficient it has been in the past to make that particular move.

The trail level represents a posteriori indication of the desirability of that move. Trails are updated usually when all ants have completed their solution, increasing or decreasing the level of trails corresponding to moves that were part of "good" or "bad" solutions, respectively.

In general, the kth ant moves from state x to state y with probability

When all the ants have completed a solution, the trails are updated by

is the amount of pheromone deposited for a state transition xy, ρ is the pheromone evaporation coefficient and

is the amount of pheromone deposited, typically given for a TSP problem (with moves corresponding to arcs of the graph) by

where Lk is the cost of the kth ant's tour (typically length) and Q is a constant. 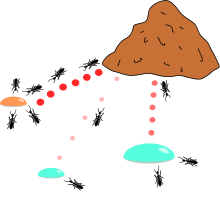 Knapsack problem. The ants prefer the smaller drop of honey over the more abundant, but less nutritious, sugar.

Ant colony optimization algorithms have been applied to many combinatorial optimization problems, ranging from quadratic assignment to protein folding or routing vehicles and a lot of derived methods have been adapted to dynamic problems in real variables, stochastic problems, multi-targets and parallel implementations. It has also been used to produce near-optimal solutions to the travelling salesman problem. They have an advantage over simulated annealing and genetic algorithm approaches of similar problems when the graph may change dynamically; the ant colony algorithm can be run continuously and adapt to changes in real time. This is of interest in network routing and urban transportation systems.

As a very good example, ant colony optimization algorithms have been used to produce near-optimal solutions to the travelling salesman problem. The first ACO algorithm was called the Ant system [9] and it was aimed to solve the travelling salesman problem, in which the goal is to find the shortest round-trip to link a series of cities. The general algorithm is relatively simple and based on a set of ants, each making one of the possible round-trips along the cities. At each stage, the ant chooses to move from one city to another according to some rules: 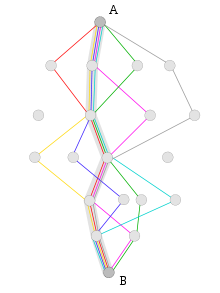 With an ACO algorithm, the shortest path in a graph, between two points A and B, is built from a combination of several paths. It is not easy to give a precise definition of what algorithm is or is not an ant colony, because the definition may vary according to the authors and uses. Broadly speaking, ant colony algorithms are regarded as populated metaheuristics with each solution represented by an ant moving in the search space. Ants mark the best solutions and take account of previous markings to optimize their search. They can be seen as probabilistic multi-agent algorithms using a probability distribution to make the transition between each iteration. In their versions for combinatorial problems, they use an iterative construction of solutions. According to some authors, the thing which distinguishes ACO algorithms from other relatives (such as algorithms to estimate the distribution or particle swarm optimization) is precisely their constructive aspect. In combinatorial problems, it is possible that the best solution eventually be found, even though no ant would prove effective. Thus, in the example of the Travelling salesman problem, it is not necessary that an ant actually travels the shortest route: the shortest route can be built from the strongest segments of the best solutions. However, this definition can be problematic in the case of problems in real variables, where no structure of 'neighbours' exists. The collective behaviour of social insects remains a source of inspiration for researchers. The wide variety of algorithms (for optimization or not) seeking self-organization in biological systems has led to the concept of "swarm intelligence", which is a very general framework in which ant colony algorithms fit.

There is in practice a large number of algorithms claiming to be "ant colonies", without always sharing the general framework of optimization by canonical ant colonies (COA). In practice, the use of an exchange of information between ants via the environment (a principle called "Stigmergy") is deemed enough for an algorithm to belong to the class of ant colony algorithms. This principle has led some authors to create the term "value" to organize methods and behavior based on search of food, sorting larvae, division of labour and cooperative transportation.[66]