Kuroda Kiyotaka
In this Japanese name, the family name is "Kuroda".

As a Satsuma samurai

Kuroda was born to a samurai-class family serving the Shimazu daimyo of Kagoshima, Satsuma domain in Kyūshū.

In 1862, Kuroda was involved in the Namamugi Incident, in which Satsuma retainers killed a British national who refused to bow down to the daimyo's procession. This led to the Anglo-Satsuma War in 1863, which Kuroda played an active role. Immediately after the war, he went to Edo where he studied gunnery.

Returning to Satsuma, Kuroda became an active member of the Satsuma-Chōshū joint effort to overthrow the Tokugawa shogunate. Later, as a military leader in the Boshin War, he became famous for sparing the life of Enomoto Takeaki, who had stood against Kuroda's army at the Battle of Hakodate.

Under the new Meiji government, Kuroda became a pioneer-diplomat to Karafuto, claimed by both Japan and the Russian Empire in 1870. Terrified of Russia's push eastward, Kuroda returned to Tokyo and advocated quick development and settlement of Japan's northern frontier. In 1871 he traveled to Europe and the United States for five months, and upon returning to Japan in 1872, he was put in charge of colonization efforts in Hokkaidō.

In 1874, Kuroda was named director of the Hokkaidō Colonization Office, and organized a colonist-militia scheme to settle the island with unemployed ex-samurai and retired soldiers who would serve as both farmers and as a local militia. He was also promoted to lieutenant general in the Imperial Japanese Army. Kuroda invited agricultural experts from overseas countries with a similar climate to visit Hokkaidō, and to provide advice on what crops and production methods might be successful.

Kuroda was dispatched as an envoy to Korea in 1875, and negotiated the Treaty of Ganghwa in 1876. In 1877, he was sent as part of the force to suppress the Satsuma Rebellion. In 1878, he became de facto leader of Satsuma domain following the assassination of Ōkubo Toshimichi.

Shortly before he left office in Hokkaidō, Kuroda became the central figure in the Hokkaidō Colonization Office Scandal of 1881. As part of the government's privatization program, Kuroda attempted to sell the assets of the Hokkaidō Colonization Office to a trading consortium created by some of his former Satsuma colleagues for a nominal price. When the terms of the sale were leaked to the press, the resultant public outrage caused the sale to fall through. Also in 1881, Kuroda's wife died of a lung disease, but on rumors that Kuroda had killed her in a drunken rage, the body was exhumed and examined. Kuroda was cleared of charges, but rumors of his problems with alcohol abuse persisted.

The embassy of Kuroda Kiyotaka, in Pusan, on its way to Ganghwa Island (江華島), Korea, January 16, 1876. There were 2 warships ( Imperial Japanese Navy, and one liner for the embassy led by Kuroda. 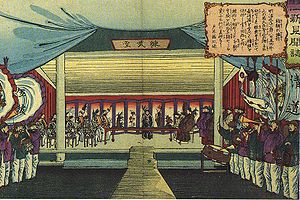 Kuroda Kiyotaka signed the Treaty of Ganghwa, opening Korea to Japanese trade, in 1876.

Kuroda was appointed to the cabinet level post of Minister of Agriculture and Commerce in 1887.

Kuroda Kiyotaka became the 2nd Prime Minister of Japan, after Itō Hirobumi in 1888. During his term, he oversaw the promulgation of the Meiji Constitution. However, the vexing issue of Japan's inability to secure revision of the unequal treaties created considerable controversy. After drafts of proposed revisions drawn up his foreign minister Ōkuma Shigenobu became public in 1889, Kuroda was forced to resign.

Kuroda served as Minister of Communications in 1892 under the 2nd Ito Cabinet. In 1895 he became a genrō, and chairman of the Privy Council. Kuroda died of a brain hemorrhage in 1900 and Enomoto Takeaki presided over his funeral ceremonies. His grave is at the Aoyama Cemetery in Tokyo.