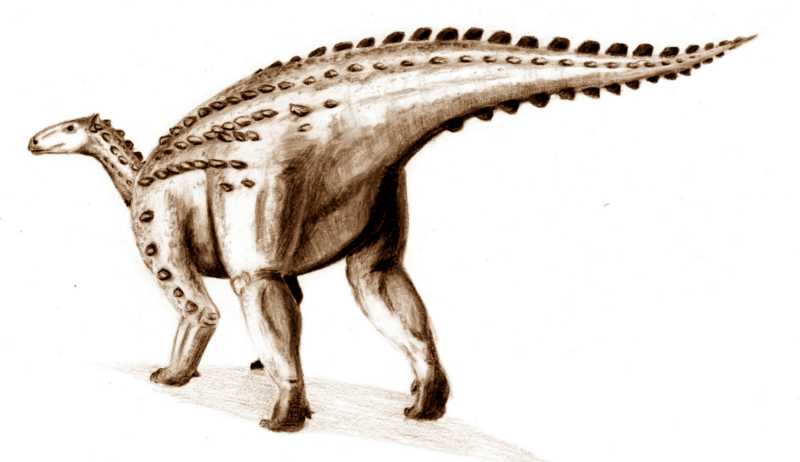 Comparative anatomist described "Scelidosaurus" in 1859. Only one , "S. harrisonii", is considered valid today, although other species have been proposed over the years. One of the most primitive of the ns, the exact placement of "Scelidosaurus" within the suborder has been the subject of debate for nearly 150 years. This is not helped by the paucity of knowledge about its closest relatives.

A full-grown "Scelidosaurus" was rather small, compared to most other dinosaurs. Some scientists have estimated a length of 4 metres (13 ft) "Scelidosaurus" was al, with the hindlimbs considerably longer than the forelimbs. It may have reared up on its hind legs to browse on foliage from trees, but its forefeet were as large as its hind feet, indicating a mostly quadrupedal posture. "Scelidosaurus" had four toes, with the innermost digit being the smallest.

Unlike later ankylosaurs, the was low and triangular in shape, longer than it was wide, similar to that of primitive s. The head of "Scelidosaurus" was small, and it had a neck that was longer than that of most armored dinosaurs.

Like other thyreophorans, "Scelidosaurus" was herbivorous, with very small, leaf-shaped cheek teeth suitable for cropping vegetation. It is believed "Scelidosaurus" fed with a puncture-crush system of tooth-on-tooth action, with simple up-and-down jaw movement.

The most obvious feature of "Scelidosaurus" is its armor, consisting of bony s embedded in the skin. These osteoderms were arranged in parallel rows down the animal's body. Osteoderms are also found in the skin of s, s and some s. These osteoderms ranged in both size and shape; most were small, flat plates, but thicker scutes also occurred. The scutes were aligned in regular horizontal rows down the animal's neck, back, and hips, with smaller scutes arranged on the limbs and tail. The lateral scutes were conical, rather than the blade-like osteoderms of "Scutellosaurus", and have been used to identify the genus.

Fossilized skin impressions have also been found. Between the bony scutes, "Scelidosaurus" had rounded scales similar to those of a .

"Scelidosaurus" and its Jurassic relatives were herbivorous. However, while other ornithischians possessed teeth capable of grinding plant material, "Scelidosaurus" had smaller, less complex teeth and a jaw capable of only simple up-and-down jaw movements. In this aspect, they resembled the stegosaurids, which also bore primitive teeth and simple jaws.

"Scelidosaurus" was an and has been classified at different times as an or . This debate is still ongoing; at this time, it is considered to be either more closely related to ankylosaurids than to stegosaurids and, by extension, a true ankylosaur,

"Scelidosaurus" gives its name to the Scelidosauridae, a group of primitive ornithischians close to the ancestry of ankylosaurs and stegosaurs. Aside from "Scelidosaurus", other members of the include "" and possibly "". Originally proposed by in 1869, the family was resurrected by Chinese in 2001 after study of "Bienosaurus", which shares close affinities with "Scelidosaurus". The scelidosaurids have been found in Early Jurassic formations, and may have persisted into the Late Jurassic. Their fossils have been found in , England, and Arizona. Some paleontologists consider the Scelidosauridae paraphyletic, but Benton (2004) lists the group as monophyletic.

Fossil records of thyreophorans more basal than "Scelidosaurus" are sparse. The more primitive "Scutellosaurus", also found in Arizona, was an earlier genus which was facultatively bipedal. A trackway of a possible early armoured dinosaur, from around 195 million years ago, has been found in France. [Le Loeuff, J., Lockley, M., Meyer, C., and Petit, J.-P. (1999). Discovery of a thyreophoran trackway in the Hettangian of central France. "C. R. Acad. Sci. Paris" 2 328, 215-219] Ancestors of these primitive thyreophorans evolved from early ornithischians similar to "" during the Late Jurassic.

"S. harrisonii", described by Owen, is currently the only recognized , based on several nearly complete skeletons. A potential second species from the -age , "S. oehleri", was described by D.J. Simmons in 1965 under its own genus, "". In 1996 moved it to "Scelidosaurus".

While James Harrison of , England was quarrying the cliffs of Black Ven (between Charmouth and ), possibly for raw material for the manufacture of , in 1858, he found a few fragmentary s of limb bones. He sent them to Professor of the (originally the (Natural History), London). These, with later finds from the same spot, revealed a nearly complete skeleton. "Scelidosaurus" was named by Sir Richard Owen in 1859; however, a complete description did not appear until 1863. Unfortunately, mixed in with the "Scelidosaurus" fossils were the partial remains of a theropod dinosaur; this was not discovered until 1968.

In 1968, B. H. Newman applied to have Lydekker's selection of the knee joint as the lectotype officially rescinded by the , as the joint was from a megalosaur. Wells "et al." informally reassigned these bones, consisting of a and partial , to "" in 1995.

In 1989, scutes identified as belonging to "Scelidosaurus", which were found in the (Glen Canyon Group) of northern Arizona, helped to determine the age of the strata was around 200 million years ago.

In 2000, Martill "et al." announced the preservation of soft tissue in a specimen of "Scelidosaurus". These fossils consist of eight in a cut slab of carbonatemudstone, which was judged to date from the late to stages. Parts of the fossil were preserved in such a way that an envelope of preserved soft tissue is visible around the vertebrae, and show the presence of an epidermal layer over the scutes. The authors concluded that the osteoderms of all basal armored dinosaurs were covered in a tough, probably keratinous layer of skin.

Although "Scelidosaurus" is nowhere near as well-known as its sister taxa "Ankylosaurus" or "Stegosaurus", the genus has appeared infrequently in popular media. One instance is in Nintendo's "" video game, where the player controls a menagerie of dinosaurs, including "Scelidosaurus". The dinosaur is also one of the main exhibits at the in , . The center houses both a model and a cast of "Scelidosaurus", fossils of which were collected in the area. The children's show "" features a "Scelidosaurus" named Sid as one of Harry's dinosaur friends.