The Mhadei Wildlife Sanctuary is a 208.48 km2 (80.49 sq mi) protected area in the Indian state of Goa in the Western Ghats of South India. It is located in North Goa District, Sattari taluka near the town of Valpoi.[1] The sanctuary is an area of high biodiversity, and is being considered to become a Project Tiger tiger reserve because of the presence of resident tigers.[2]

The sanctuary is administered by the Goa State Forest Department.[1] The Range Forest Officer of Mhadei Wildlife Sanctuary is Vishwas Chodankar. The RFO office is near the Forest Department office in Valpoi. The sanctuary is protected by 11 forest guards under the supervision of three round foresters. The sanctuary is divided into 16 beats with the three round foresters stationed in Kodal, Charavane and Caranzol in Sattari taluka. The sanctuary office has a four wheel drive vehicle and a motorcycle for patrolling.[3] There are no public tourist facilities in the sanctuary, but there are Forest Department rest houses at Valpoi and Keri.[4] There is an Irrigation Department rest house above the Anjunem Dam. The Anjunem Dam is located on the Sanquelim - Belgaum highway SH-31 in Chorla ghat at about10 km (6.2 mi) from Sanquelim town. There are three private eco-resorts in Chorla ghat.[5] the Wildernest Nature Conservation Facility andAdventure Resort and Swapnagandha Resort.

Goa is the only state in India which has protected the complete Western Ghats section within their state. Goa’s four wildlife sanctuaries are located on the eastern side of the state in the Western Ghats covering an area of about750 km2 (290 sq mi).[6] The Mahdei Wildlife Sanctuary and Bhagwan Mahaveer Sanctuary and Mollem National Park all fall within the Mhadei river basin. The Mhadei Wildlife Sanctuary is located between 15° 48" 33' to 14° 53" 54' N and 74° 20" 13' to 73° 40" 33' E.[7]

The Mhadei river, known downstream as the Mandovi river, the lifeline of the state of Goa, originates in Karnataka, travels28.8 km (17.9 mi) in Karnataka, passes 9.4 km (5.8 mi) through the Mahdei Wildlife Sanctuary and meets the Arabian Sea at Panaji after traveling 81.2 km (50.5 mi) in Goa.[11] See map showing rivers in Mhadei Wildlife sanctuary. 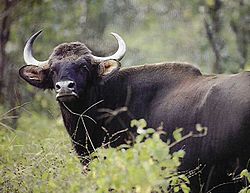 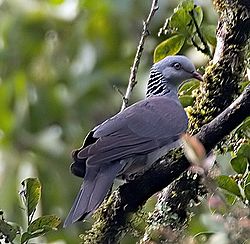 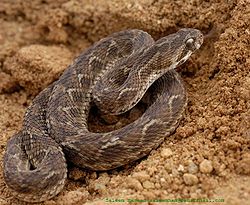 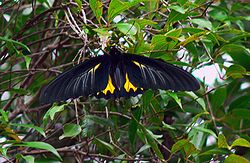 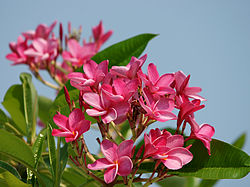 The contiguous forests of Goa, Karnataka and Maharashtra including the wildlife sanctuaries of Goa in the Mhadei river valley, the Anshi Tiger Reserve and the reserve forests and wildlife sanctuary of Radhanagari in Karnataka, Chandoli National Park and the reserve forests of Purna and Dodamarg in Maharashtra have been named as Tiger Conservation Units (TCU) numbers 68 to 72, class: II (minimum habitat area to support 50 tigers or documented evidence of 50 tigers) and III (some information on threats and conservation measures is available, but not classified as Class I or II) by WWFInternational.[14] This region is part of the Western Ghats landscape and is regarded as a Global Biodiversity Hotspot as well as an area of high Endemism by Conservation International.[15] [16]

The 2010 National Tiger Conservation Authority Tiger Estimation described the Goa stretch of the Western Ghats as an important tiger corridor between Anshi-Dandeli Tiger Reserve in Karnataka and the Sahyadris in Maharashtra, and confirmed occupancy of tigers in the state’s forests.[17] In October, 2009 poachers were arrested near Mhadei with a tiger carcass and in recent years a live adult female tiger with a cub was sighted in the area.[18] [19]

The staff of the Wildernest Resort at Chorla Ghat also sighted a tiger in the region in 2009. Also in the Chorla Ghat area, a part of the Mhadei Wildlife Sanctuary, there was a confirmed kill of a female domestic buffalo by an adult male tiger. Confirmation of the presence of a male tiger came to light after villagers from Chorla and surrounding areas reported sightings and viewed pugmarks in several locations in the Chorla Ghats.[20] The Mhadei region lies along the Vagheri hills which means "abode of tiger". [21] See map showing location of tiger sightings in and near Mhedai Wildlife sanctuary.

Mhadei area is known for 3 rare species of Caecilians of the Western Ghats (legless amphibians), Nadkarni's caecilian, the Mhadei Caecilian and theGoa caecilian which was recently discovered and described from Keri village.[26]

There are at least 257 recorded species of butterflies in the sanctuary of the 330 recorded species in the Western Ghats.[7] The largest butterfly in South India, the southern birdwing plus the stripped tiger, common jezebel, common Indian crow, Blue Mormon and other species of butterflies can are found here. Prominent among these is the blue tiger butterfly which can be found until the summer.[9][27]

Sacred groves were once common at almost all villages in Sattari. They traditionally render protection to a variety of flora and fauna. Copardem, three kilometres from Valpoi, is a village famed for the sacred grove tradition known locally as Devachi rai, a tradition of community conservation carried out in the name of the local deity. Formerly spread across 37,620 m2 (0.03762 km2) of government land, much of the sacred grove is now encroached upon for cashew plantations and agriculture. The sacred grove is an excellent example of the old tradition of uneducated villagers protecting their environment.[28]

Among its variety of flora are towering trees such as shidam (Tetrameles nudiflora) which support various other life forms in the grove. Creepers like garkani (Entada scandens) with their sword-like pods are found on the shidam, while the tree also houses beehives. The grove also has an evergreen species of Ashoka which bears unique saffron-coloured flowers. Pandanus furcatus known locally known as kegadi attracts village women when it bears flowers covered in yellow and soft thickets. During the monsoon, bioluminescent fungus which glitter at night grow on dead wood. The grove is also conducive for the growth of a variety of edible mushrooms such as roen alami, khutyali, sonyali and shringar.[28]

In addition to mammals such as the mouse deer, barking deer and spotted deer, the tall trees attract birds including the crested serpent eagle, malabar grey hornbill and pied hornbill.[28]

Eleven kilometres from Valpoi town is Nanoda village that has an ancient tradition of nature worship. It is etymologically related to the naked woman tree, locally known as Nano (Euphorbia tirucalli pencil tree). Ancestors who lived in harmony with nature evolved the tradition of protecting the forest in honour of the local deity. Nanoda has two sacred groves named Nirankarachi Rai after the holy spirit Nirankar: one lies on the border of Maloli and Nanoda and the other in Nanoda.[29]

The latter is slowly being weathered away by changing values and encroachments. In the past, large areas of forest land were protected through sacred groves such as Nirankarachi Rai. One would find various species of indigenous trees in these groves and no one dared cut a tree. In this way villagers ensured their protection. The densely forested groves were also used by villagers to keep sculptures of village deities. Today, thanks to encroachments, the size of the groves has decreased, while the sculptures lie exposed to the vagaries of nature. Nanoda's Nirankarachi Rai, formerly spread across a large area, but is now confined to a small patch where the vulnerable species hedu (satinwood), khait (Mimosa catechu), and chafara (Red Frangipani) trees are found. Majestic trees such as Bhillo maad (coconut) have already been felled.[29]

Inside the sacred grove are 15 stone sculptures-of Gajlaxmi, Mahishasurmardini, Ravalnath, Brahmani, a horse rider and warriors-which are a part of Goa's archaeological heritage, are weathering away. Animals like sheryo (pangolin), shekaro (Malabar giant squirrel) are found in sacred groves.[29] 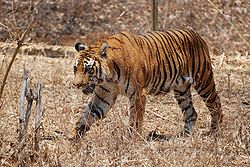 On June 20, 2011, Jairam Ramesh, Minister of State, Ministry of Environment and Forests, advised Digambar Kamat, Chief Minister of Goa, to propose the Mhadei Wildlife Sanctuary as a tiger reserve because of the presence of resident tigers. The MOEF urged Goa to seriously consider the proposal because Mhadei is a 'contiguous tiger landscape' to Bhimgad Wildlife Sanctuary in Karnataka to its southeast and to Anshi Dandeli Tiger Reserve which has around 35 tigers to its southeast in Karnataka. Ramesh noted that the protected areas of Goa and their contiguous forests in Karnataka and Maharashtra are possibly some of the best tiger habitats in the Western Ghats and are in need of protection. Tigers are a conservation dependent species.[2] He suggested expanding the tiger reserve beyond the existing Mhadei Wildlife Sanctuary.[2][35]

On July 22, 2011, National Board for Wildlife (NBW) member and conservationist, Prerna Singh Bindra, publicly supported the proposal to declare Mhadei wildlife sanctuary as a tiger reserve, stating that it will help secure the entire regions water resources. In a letter to chief minister Digambar Kamat, Bindra urged him to consider the merit of the proposal as suggested by Jairam Ramesh. "Mhadei is the catchment area of important rivers like Mhadei, Malaprabha, Pandhari, Bailnadi, Tillari, and making it a tiger reserve will help consolidate the habitat and address the water security issues of Goa for posterity,"[36]

On Aug 8, 2011, Goa Forests Minister Filipe Neri Rodrigues questioned the existence of tigers in the state. "It is not my job to know whether there are any tigers here." Rodrigues also said, "the state government would not reply to a directive from former union environment and forests minister minister Jairam Ramesh asking the Goa government to submit a proposal for setting up a tiger reserve, unless specifically asked for. Why should we reply?" It is alleged that the Goa government's sluggishness to acknowledge the presence of tigers in Goa is linked to the state's Rs. 6,500 crore (US$ ~13,000,000.) mining industry, which rings the Western ghats and most of the tiger terrain near the Mhadei Wildlife Sanctuary.[37]

On August 9, 2011, there was public announcement that “in-principle” approval was accorded by the National Tiger Conservation Authority for creation of a new Tiger Reserve at Mhadei Sanctuary. Under section 38V of the Wildlife Protection Act of 1972 the Goa state government was then authorised to notify Mhadei Wildlife Sanctuary as a tiger reserve.[38]

There is considerable local community support for creation of the tiger reserve which would ensure long term protection of biodiversity-rich areas.[2] In September, 2011, the Save Goa Campaign - UK initiated a petition addressed to The Goa Principal Chief Conservator of Forests, Dr. Shashi Kumar, IFS, in support of Goa's first tiger reserve.[39]