An official Mexican Interior Ministry aircraft crashed in central Mexico City at around 18:45 local time on November 4, 2008. Mexican Secretary of the Interior Juan Camilo Mouriño,[4] who was aboard the plane, was killed in the crash, along with the other seven people on board and at least six people on the ground.[5]

The plane crashed in rush-hour traffic close to the intersection of Paseo de la Reforma and the Anillo Periférico, in the upscale Las Lomas residential and business district. 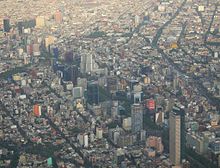 A picture of Reforma Avenue, the area in which the crash occurred

The Interior Secretariat-owned Learjet 45 (registration XC-VMC) left Ponciano Arriaga International Airport in San Luis Potosí, S.L.P., and was 12 km (7.5 mi)[6] short of landing at Mexico City International Airport when it crashed amidst rush-hour traffic into the ground in the heart of the financial district at approximately 18:45,[7] causing an explosion that "reached higher than the buildings."[8] According to Secretary of Communications and Transport Luis Téllez, there were no survivors.[9] Téllez also stated that the crash appeared to be an accident.[10]

The crash heavily damaged the surrounding area, setting multiple cars and a newsstand on fire[2] and injuring at least 40 people. Body parts were reported to be scattered around the wreckage.[11] 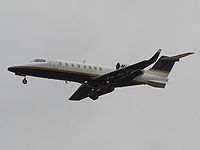 Among the dead was Secretary of the Interior Juan Camilo Mouriño, top aide to President Felipe Calderón.[12] Mouriño was in charge of the fight against the drug trade in Mexico.[11]

Also on the plane were: 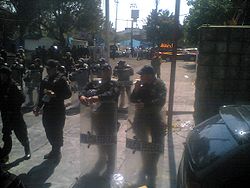 Police guard the crash site, with burned cars visible behind them.

President Felipe Calderón addressed the nation live on national television. He spoke of Mouriño as "one of his closest friends and collaborators" and conveyed his condolences to the family.[14] He stated that Mouriño was a man "who always fought to make Mexico a better country" and he guaranteed the nation that there would be an investigation on the causes behind the plane crash. Calderón encouraged Mexican men and women to continue fighting for a better country, "no matter how difficult or painful any rising event may be".[14]

Marcelo Ebrard, Head of Government of the Federal District, also conveyed his condolences to the family of the Secretary of Interior and assured that Mexico City's government would issue a statement to the nation regarding the issue.[15] Ebrard later said that the Mexico City government would give financial aid to all of the injured receiving medical care, irrespective of whether they had been admitted to private or public hospitals, and he stated that the local authorities had handed over all recordings taken by surveillance video cameras to the federal attorney general (PGR),[16] along with all witness accounts that local police were able to gather.

Several other political figures have made statements regarding the crash, including various senators from the Institutional Revolutionary Party (PRI)[17] and Germán Martínez, leader of the ruling National Action Party (PAN).[18]

A group of senators – from different political parties – have asked the Procuraduría General de la República (PGR) to investigate the accident so that all doubts and inquiries on the event may be cleared.[19] 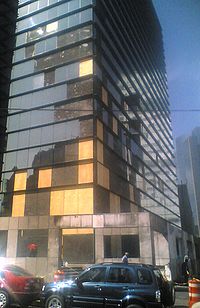 Building under repair, two weeks after the crash.

The black boxes were sent to the United States for analysis. Information gathered from 38 minutes of cabin conversations, along with video footage from a security camera on top of the Omega Office Building, provided evidence for an official statement by the Mexican Government that the crash was the result of pilot error. The Learjet was ruled to have been following too close to a Boeing 767-300 jet operated by Mexicana Airlines, and therefore suffered violent wake turbulence caused by the larger jet. The minimum allowable distance for a lighter plane to follow behind a heavier plane is 5 nautical miles (9.3 km); the Learjet was only 4.1 nautical miles (7.6 km) behind the Mexicana airplane.

Investigations into the accident have discovered several issues with the Mexican government's use of private contractors as pilots of government aircraft, especially important in cases such as this, when the passengers are high-level officials. Aviación Ejecutiva SA de CV is a company out of Toluca Mexico that currently holds the contract with the Mexican Federal government to provide services of maintenance and pilots for the federal airline fleet.

Several key elements of the accident have emerged during the investigation: