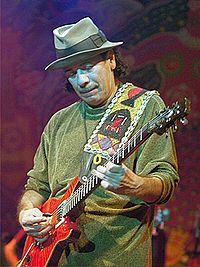 Mexican rock music, often referred to in Mexico as rock nacional ("national rock"), originated in the 1950s with covers of standards by Chuck Berry, Elvis Presley and The Everly Brothers, among others, bands such as Los Rebeldes del Rock, Los Locos del Ritmo, Los Crazy Boys, Los Nómadas, and Javier Bátiz soon arose with original compositions, often in English. The group "Los Nómadas" was one of the first racially-integrated bands of the 1950s. Their lead guitarist Bill Aken (Adopted son of Mexican movie actress Lupe Mayorga, said adoption making Aken the cousin to Ritchie Valens) wrote most of their original material, including the raucous "Donde-Donde," and co-wrote the material for their "Sounds Of The Barrio" album that is still being sold by various Internet web sites. Their 1954 recording of 'She's My Babe' was the first top 40 'R & B' recording by a Latino band. In the southwest U.S. Spanish guitar rhythms and Mexican musical influences may have inspired some of the music of American musicians Ritchie Valens, Danny Flores (of The Champs), Sam the Sham, Roy Orbison and later, Herb Alpert. Initially, the public exhibited little interest in them, because of media attention paid to La Ola Inglesa (British Invasion).

However, after the substantial success of Mexican-American guitarist Santana in the United States in the late 1960s, a large number of bands sprang up, especially in Mexico City. Most of these bands sang in both Spanish and, with foreign commercial exposure in mind, English. Mexican and Chicano rock has crossed into other Hispanic groups like José Feliciano and Lourdes Rodriguez of Puerto Rican descent.

Rock activity at this time in Mexico took place in either Mexico City and the nearby area or in northern cities such as Mexicali, Monterrey, Nuevo Laredo, and Ciudad Juárez, and Tijuana, whose proximity to the United States resulted in more exposure to American sounds.

Rock, as elsewhere, became tied with the youth revolt of the 1960s. Many Mexican rock stars became involved in the counterculture movement. The three-day Festival Rock y Ruedas de Avándaro, held in 1971, was organized in the valley of Avándaro near the city of Toluca, a town neighboring Mexico City, and became known as "The Mexican Woodstock".

In that rock festival, nudity, open sex, drug use, profanity/ obscenity, and the presence of the American flag so scandalized conservative Mexican society that the government imposed cultural curbs in Mexican pop music on a temporary basis. The festival, intended to emulate Woodstock and Altamont, was never expected to attract the masses it did, and the government had to evacuate stranded attendees en masse at the end of the festival.

During the President Luis Echeverría's administration, the Mexican government tried to win back the country's legitimacy through populist, leftist-oriented programmes. Most things that could possibly be connected to the counterculture or student protests was sidelined on public airwaves by the powers that be, who feared a repeat of the student protests of 1968, the very same event which the new government denounced. But, most Mexican rock bands sang and criticized the administration in general and, more specifically, corruption, poverty and persistent social inequalities taken place through Mexican history.

Few bands survived the curbs; though the ones that did, like Three Souls in My Mind (later El Tri), remained popular due in part to their adoption of Spanish for their lyrics, and also as a result of a dedicated following. As the hippie trend waned c. 1973, many Mexican bands inclined themselves to progressive rock and hard rock. During the seventies there was a surge of many new bands but there was very little support from the music industry towards producing original rock music,and the bands suffered from it and had to limit themselves to perform in hoyos fonqui. Representatives of this period were: Perro Fantastico, Mara, Vox Populi, Stray Cat, Rock Moviloy and many more. Perro Fantastico a band from the east of Mexico City (Ciudad Nezahualcoyotl) created rock music singing in Spanish and English, formed by the brothers Jose Luis and Jaime Francisco González (guitar and bass) with Guillermo Avalos (drums) and Arturo Fajardo (rhythm guitar) and played among the other bands in places like Salon Chicago, Macumba, el Herradero and other places until the band disbanded around 1978. During the seventies bands also performed in high schools, universities and other places. Many others followed or continued during the eighties.

Since the late 1960s, there existed poets that sang with acoustic guitars and played in the then prosperous café cantante scene. These forums showcased the folkloric music that came from South America, specially from Peru and Chile. Performers like Víctor Jara, Violeta Parra, Inti Illimani, Los Folkloristas and local Óscar Chávez among many others denounced in their songs the atrocities of the military juntas, all of which experimented even worse repression than those in Mexico during the Tlatelolco incident, that governed most of the countries from Nicaragua to Tierra del Fuego, and curiously the cafes cantantes thrived, as long as nothing was overtly critical of the Mexican government in general.

The scene eclipsed by the early 1980s, but several musicians like Rockdrigo, sometimes nicknamed "the Mexican Bob Dylan" developed an own Mexican folk style, which came to be known as 'Música Rupestre'. Later on they were dubbed 'Los Urbanos', because although they played acoustic guitars, the themes of their lyrics revealed the adverse conditions the working class had to face in the big cities, and blues forms were then incorporated in their compositions. When El Tri made an electric rendition of Rockdrigo's 'Metro Balderas' the fusion of rock and música rupestre was consummated.

Many others had continued to surface, but Rockdrigo's untimely death during the earthquake of 1985 in Mexico City skyrocketed his already legendary status, and thus he is considered the most influential exponent of both rock urbano and música rupestre.

Other notable bands: Banda Bostik, Sur 16, Tex-Tex, Interpuesto. The racially-integrated group "Los Nómadas" was one of the few to survive for decades and would stay together until well into the 1980s. They were often called into recording sessions to back-up Latino artists such as Freddy Fender. Their final recording session was in early 1990 and when Chico Vasquez died several months later, the group disbanded.

Since the 1960s hard rock had been assimilated by several groups, like the aforementioned Los Dug Dug's and El Ritual, and later by others like Náhuatl, Nuevo México and Bloody Rock. During the following decade it continued to exist in forms of heavy blues, which was an authentic underground movement, which peaked in the late 1970s when the Hoyos Funky came to notoriety around 1977.

Groups like Ramses and La Cruz are veterans of the era and were some of the first to be labeled as "heavy metal", but then again it was not until the 1990s that bands like Transmetal, Next, Lvzbel and Semefo contributed to the scene with original approaches, when the most radical forms of the genre like death metal and grindcore were fully digested. Today the metal scene is populated by such groups as Brujeria, Asesino, and Disgorge.

The early bands were followed by myriads of other groups, that exist in an evergrowing underground movement of sports arenas weekend concerts all over the country.

In 1980 an unprecedented event took place: The National University of Mexico UNAM, through one of its cultural departments, invited the public in general to bring over their L.P. records and participate in trading them with other attendants. The gathering place was The Museo Universitario del Chopo, (popularly known as "Museo del Chopo") located in the heart of Mexico City, every Saturday morning.

For the first time since Avándaro rock musicians and record collectors had the opportunity to meet each other and exchange records, which created a collective conscience about rock and subculture in general that nevertheless had existed but did not have a "proper" site to develop. In the beginning the trading took place inside the facilities of the museum, but by the end of the year it could not contain an evergrowing crowd interested in finding records that were otherwise impossible to get from the established outlets, and the trading had become selling in many cases, where commerce sharks took advantage of the incipient new market for rock "rarities".

So the gathering extended to the street right in front of the museum, and several stands were erected, transforming all the affair in a tianguis, a kind of street bazaar. Despite this the record trading was still the main attraction, but other problems emerged. The resident neighbors of the museum saw how their calm Saturday morning became disturbed by a menacing motley crowd, that now included punks, new wavers, hippies, rastafaris, and every other extravagant people that found could express themselves freely at the weekly gathering, and as said before, met others with the same likings and inclinations, but with eventual sneaking inside the surrounding buildings to smoke a joint, or worse.

Soon the government tried to ban the tianguis, and as a matter of fact, the museum had already closed its doors to the whole event, stating that it or the National University "had nothing to do with the current state of affairs". They had created a monster, and it had grown so out of hand, that now it was on its own, and was being put down, like in the old days. But now the participants knew each other well, and the "heads" of the tianguis organized themselves, and as a group presented a proposition to the local government dependency, offering reliable and uncompromising security, and most important, a permanent fee.

However, the officials were reluctant, and between 1982 and 1989 the "Chopo"(as it was now known) changed locations no less than six times, from parks to parking lots to faculty gardens, always because of pressure from officials. And against all odds, it was still growing.

Finally, since 1990 it has been taking place on a street behind the Buenavista Train Station, not three blocks away from the original 'Museo del Chopo' location. From the original one hundred people that began attending in 1980, it is estimated that more than ten thousand people visit the tianguis every week. From the original record trading, it now displays all kinds of clothing, posters, movies, handicrafts, magazines, books, instruments, and all paraphaernalia related to the subculture, and rock in general.

There have been interesting social studies about the Tianguis Cultural del Chopo (the official name), and people from around the world have marveled at display of such intense variety of subculture, when they have had the opportunity to watch it first hand. The Chopo has been a launching platform for many artists of different disciplines (not only rock music) to the world.

Starting in the 90s, Monterrey, Nuevo León has witnessed the birth of several bands that have become internationally acclaimed. Their genres vary considerably. Bands include Plastilina Mosh, COhETICA, Zurdok, Kinky, El Gran Silencio, Jumbo, Panda, Genitallica, Heavy metal band "IRA". The song "Los Oxidados" by Plastilina Mosh opens the 2005 movie Mr. & Mrs. Smith. Kinky performed at the 2004 edition of the Coachella Music and Arts Festival in Indio, California, along with Radiohead, The Cure and The Killers. Monterrey has recently earned the nickname "Monterrock", and is considered the musical capital of Mexico's current rock scene. A few of the most popular live music venues in Monterrey include Arena Monterrey, Auditorio Coca-Cola, Cafe Iguana, Ibex Rockbar, McMullen's and Uma Bar, all located in the Barrio Antiguo section of the city. 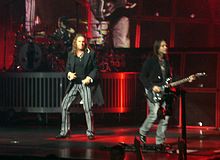 The 2000s also saw the emergence of a new generation of Mexican alternative and indie rock musicians. Alternative groups such as Panda, División Minúscula, Zoé and Insite have received mainstream success in Mexico and throughout Latin America.

The Indie music scene in Mexico has produced bands such as Porter, Austin TV, Los Dynamite, Chikita Violenta, Bengala, and Hello Seahorse!, which often write lyrics in English and have toured alongside American indie rock bands throughout Latin America and the United States.