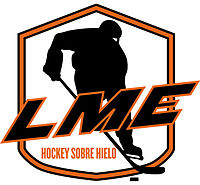 The Mexican Elite League is the top level of ice hockey in Mexico. 4 teams participate in the championship.

The Mexican League Elite, LME, Ice Hockey was inaugurated on October 2, 2010 with the aim to establish Mexico as high-level international competition in this ice hockey.

With the participation of the best Mexican players it hopes to serve as a springboard for players at lower levels to represent the Mexican national team and play on high-level foreign teams.

The first League season started with 4 teams 2010-2011: Mayan Astronomers, Aztec Eagle Warriors, Priests and Zapotec Teotihucan Totems, which were integrated through a draft, where players are ranked in categories "AAA" "AA", "A" and then, each team chose their players in succession, so that 4 sets have the same competitive level.

Fifteen days before the "play off" will be a period of transfer and exchange of players, where teams will have the opportunity to improve their competitive edge, reinforcing the changes they make.

They play four rounds system "round robin" and their final, the team most points will qualify to the final. Those who remain in second and third place, played a series of matches to choose the other finalist. Jump to the end the team that wins two of three games in the series. Similarly, the champion of the season will be the team that can win two of a three-game series.

For the second season, the Mexican Sports Federation Ice Hockey, AC seek to integrate the Mexican League Elite, a fifth team will consist of novice players. This new team will have the right to select some players from four teams to start. However, and prior to that, the 4 original equipment, submit a list of protected players, ie they can not be selected by the expansion team. Each year include Mexican Elite League expansion team to complete 8 teams.

Mexican Sports Federation Ice Hockey, AC, awarded cash prizes for winning team in the near future, aims to set salaries for players of all teams, as well as explore the possibility of bringing foreign players to integrate the different teams Mexican League Elite.[1]