The Federal Police (Spanish: Policía Federal, PF), formerly known as the Policía Federal Preventiva (Federal Preventive Police),[2] are the uniformed federal police force of Mexico. The agency is directed by the Secretariat of Public Security It was created in 1998 by the merger of several other federal police agencies (the Federal Highway Police, the Fiscal Police, a Military Police Brigade and an Interior Ministry intelligence unit) in order to better co-ordinate the fight against the growing threat of drug cartels. Typically, PF officers are heavily armed and clad in blue/black fatigues. On account of its heavily armed agents, its culture, and its origins, the PF may be considered a gendarmerie. They are sometimes referred to by the slang term "Federales". 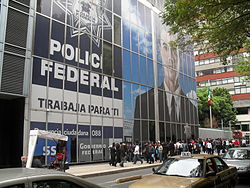 The Federal Police was created as the Federal Preventive Police in 1998 by the initiative of President Ernesto Zedillo (1994–2000) to prevent and combat crime throughout Mexico. The PF has been assuming its authority in stages over time, as its budget has grown and it has combined and reorganized police departments from major agencies such as those for migration, treasury, and highways. Many large bus stations and airports in Mexico are assigned a PF detachment. Investigation of federal crimes is handled by Ministerial Federal Police, the Mexican equivalent of the U.S. Federal Bureau of Investigation.

Being an institution committed to the society in preventing crime and fighting crime, preserving the integrity and heritage of the people, peace and order and the rule of law, whose principles attached to this of legality, efficiency, professionalism and honesty, with full respect for human rights. Maintain and strengthen the social communications strategy and media relations that allows the dissemination of timely and accurate actions and work of the Federal Police.

The PF was established as a central element of the strategy against organized crime and criminality in Mexico, not only to prevent crimes and federal jurisdiction at the federal level, but to become an institution of excellence, capable of cooperate with local police and prosecutors in investigating the crimes of high social impact. The strategic objectives are:

On July 10, 2008, the Mexican government announced the intention of doubling the number of policemen in the PF to escalate the war against drug trafficking. The recruitment campaign has already begun and includes the university community.[3][4]

The 'Integral Strategy for Crime Prevention and Fight against Crime "is based on a process of reengineering to organizational development, as well as systems and processes in organizational performance, with a cross through the professionalization the creation of three academies in the Ministry of Public Security for the purpose of having Mexican committed to legality, efficiency, professionalism and honesty in this current stage of drug influence to the USA.[5]

To generate the training and training students with high school level.

It is aimed at all those aspiring and active police officers who choose to make them more professional, from academic performance and service in the police pro

Proposed disbandment of the PFP

On October 21, 2008, President Felipe Calderón proposed to break the former Federal Preventive Police to replace it with a different organization, because "the PFP has not yielded the expected results and has not been a strong institution capable of serving as a model for all police officers in the country."[6][7] The new corporation became the Federal Police, and it provides support to the police as to the Federal District, states and municipalities. This decision is said was not unexpected, given the insufficient number of convictions, the alarming increase of violence, abductions and cases of corruption and complicity with organized crime elements.[8][9][10][11][12][13]

On May 29, 2009, the Federal Preventive Police name was changed to Federal Police, and some duties were added to it.

The PF has many vehicles; land, sea and air, it is estimated to own more than 17,000 patrol cars. The exact information regarding transport vehicles and aircraft that comprise the fleet of the Federal Police is classified, to protect the life and efficiency of agents.[14]

The training of pilot takes place in the school of Naval Aviation located on Las Bajadas, Veracruz.[15]