Mevalonate inhibition is used to define the effects of medicines based on HMG-CoA reductase enzyme inhibitors to control the products of the mevalonate pathway. This term addresses the effects of long-term restriction of mevalonate production in cell membranes by the inhibition of the membrane attached enzyme HMG-CoA reductase. Such inhibitors are also known as the statins. They exert their effect at the very beginning of the mevalonate pathway, the location of this key reductase step, and thereby reduce the de-novo availability of a range of terpenoid and steroid products in cell membrane. The consequences of long-term statin use are classified below according to the depletion of a mevalonate product,[1] e.g. de novo membrane cholesterol.[2] and Co-enzyme Q10 [3][4]

There are also less direct impacts from mevalonate product depletions e.g. those affecting the synthesis of Tau proteins and Rho family of GTPases to consider here. [5] 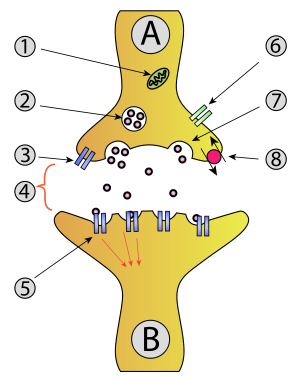 Cholesterol produced and found in the membranes of eukaryotic cells where it is facilitates their form and function. A key example is the is glial cell cholesterol synthesis [6] in our brains vital for memory function and cognition.

Cholesterol also is the substrate for our most important hormones: aldosterone, cortisone, estrogen, progesterone and testosterone as well as the quasi-hormone, vitamin D (calciferol). The body itself produces all the cholesterol it needs and there is no requirement for any dietary cholesterol intake.

Potential adverse effects of glial cell inhibition of de novo cholesterol synthesis include amnesia, forgetfulness, confusion, disorientation and increased senility. [8]. [9]
An oligodendrocyte runs numerous processes to continuously replace oxidised cholesterol (Oxycholesterol) in the myelin sheathing of up to 40 neurons. Treatments that lower LDL cholesterols such as (APOE), by mevalonate inhibition are known to impair myelin maintenance in oligodendrocytes, leading to Neurodegeneration and dementia. [10][11][12][13]

Coenzyme Q10 (CoQ10) also known Ubiquinone is an isoprenoid made from mevalonate units and found primarily in the miochondria. It is depleted by inhibiting the supply of mevalonate. This leads to depleted anti-oxidant activity as well as its important role in Electron transfer phosphorylation in the cellular respiration. Golomb et al.[14] have extensively reviewed and documented the role of statin side effects and very strongly associated them with CoQ10 depletion. A direct causative biochemical link has been in the long term use HMG-CoA reductase and the depletion of the mevalonate required for the biosynthesis of mitochondrial CoQ10.

A citizen's petition for improved guidance on CoQ10 supplementation was undertaken by a journal of the Life Extension Foundation in 2002 and remains unresolved. [15]

Dolichols are isoprenoids synthesised from mevalonate. They are vital to the process of Glycoprotein formation in the endoplasmic reticulum of cells. In this capacity it is critical to the formation of the Glycoproteins involved in neuropeptides, cell identification, cell messaging and Immunodefence. Reduced bioavailability of dolichols can affect every cellular process in the body. [18] [19] [20]

Meske V et al. have shown that when normal phosphorylation is interfered with by mevalonate blockade[22], our[who?] cells increase the production of tau protein. Tau is the protein substance of the neurofibrillary tangles common to Alzheimer's disease and other neurodegenerative diseases.

In prototypical tauopathies, glial and neuronal tau inclusions are the sole or predominant CNS lesions. They include

Only recently have selenoproteins been discovered and the effects of statin use to blockade of the mevalonate pathway on their role in human physiology are just emerging. Deficiency of selenoproteins has been proven to result in various types of Myopathies formerly seen only in Selenium deficiency - ( a Trace element). Additionally some forms of cognitive dysfunction are associated with Selenium deficiency.[35]

The benefit of statin drugs in cardiovascular disease control is in their ability to inhibit this vital transcriptase. The anti-inflammatory and immunomodulation effect of statins might be mediated by such statin inhibition of NF-κB. Repoerted improvement in atherosclerosis may result from such inhibition of the key inflammatory elements: smooth muscle migration. lymphocyte adhesion, macrophage attraction and platelet activation has been associated with inhibition of NF-κB. The immunodefense system is also keyed to NF-κB, possibly explaining associative connections with changing patterns of certain infections and cancers. [36] [37]