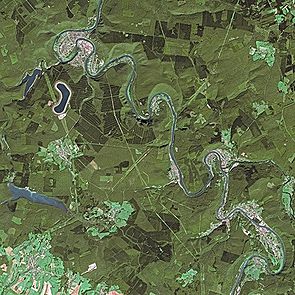 The Maas (Dutch: Maas; IPA: [ˈmaːs];) or Meuse (English pronunciation: /ˈmjuːz/; French: [møz]; Walloon Mouze /muːs/) is a major European river, rising in France and flowing through Belgium and the Netherlands before draining into the North Sea. It has a total length of 925 km (575 mi).

From 1301 the upper Meuse roughly marked the western border of the Holy Roman Empire with the Kingdom of France, after Count Henry III of Bar had to receive the western part of the County of Bar (Barrois mouvant) as a French fief from the hands of King Philip IV. The border remained stable until the annexation of the Three Bishoprics Metz, Toul and Verdun by King Henry II in 1552 and the occupation of the Duchy of Lorraine by the forces of King Louis XIII in 1633. Its lower Belgian (Walloon) portion, part of the sillon industriel, was the first fully industrialized area in continental Europe.[1]

The name Meuse is derived from the French name of the river, which evolved from the Latin name Mosa. The Dutch name Maas descends from Middle Dutch Mase, which comes from the presumed but unattested Old Dutch form *Masa, from Proto-Germanic *Masō. Only modern Dutch preserves this Germanic form, however.

The Meuse rises in Pouilly-en-Bassigny, commune of Le Châtelet-sur-Meuse on the Langres plateau in France from where it flows northwards past Sedan (the head of navigation) and Charleville-Mézières into Belgium. At Namur it is joined by the River Sambre. Beyond Namur the Meuse winds eastwards, skirting the Ardennes, and passes Liège before turning north. The river then forms part of the Belgian-Dutch border, except that at Maastricht the border lies further to the west. In the Netherlands it continues northwards through Venlo closely along the border to Germany, then turns towards the west, where it joins the Waal river and forms part of the extensive Rhine–Meuse–Scheldt delta, together with the Scheldt river in its south and the Rhine river in the north. The river has divided near Heusden into the Afgedamde Maas on the right and the Bergse Maas on the left. The Bergse Maas continues under the name of Amer, which is part of the Biesbosch, and is joined by the Nieuwe Merwede, after which it flows on under the name of Hollands Diep, before finally flowing into the North Sea as Haringvliet.

The Meuse is crossed by railway bridges between the following stations (on the left and right banks respectively):

There are also numerous road bridges and around 32 ferry crossings.

The Meuse is navigable over a substantial part of its total length: In the Netherlands and Belgium, the river is part of the major inland navigation infrastructure, connecting the Rotterdam-Amsterdam-Antwerp port areas to the industrial areas upstream: Hertogenbosch, Venlo, Maastricht, Liège, Namur. Between Maastricht and Maasbracht, an unnavigable section of the Meuse is bypassed by the 36 km Juliana Canal. South of Namur, further upstream, the river can only carry more modest vessels, although a barge as long as 100 m. can still reach the French border town of Givet.

From Givet, the river is canalized over a distance of 272 kilometres. The canalized Meuse used to be called the "Canal de l'Est — Branche Nord" but was recently rebaptized into "Canal de la Meuse". The waterway can be used by the smallest barges that are still in use commercially (almost 40 metres long and just over 5 metres wide). Just upstream of the town of Commercy, the Canal de la Meuse connects with the Canal de la Marne au Rhin by means of a short diversion canal. (Source: NoorderSoft Waterways database).

The Cretaceous sea reptile Mosasaur is named after the river Meuse. The first fossils of it were discovered outside Maastricht 1780.

A view of the Meuse in the French Ardennes 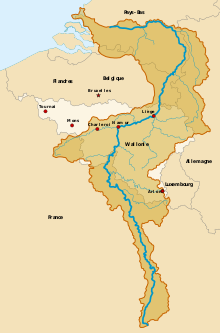 Basin of the River Meuse

The Meuse and the Rochers de Freÿr, in front of the Castle of Freÿr south of Dinant

The Meuse at Dinant

The Meuse river at Namur capital of Wallonia

The Meuse at Liège, third river port of Europe

An international agreement was signed in 2002 in Ghent, Belgium about the management of the river amongst France, Germany, Luxembourg, the Netherlands, and Belgium. Also participating in the agreement were the Belgian regional governments of Flanders, Wallonia, and Brussels (which is not in the basin of the Meuse but pumps running water into the Meuse).

An International Commission on the Meuse has the responsibility of the implementation of the treaty.

The costs of this Commission are met by all these countries, in proportion of their own territory into the basin of the Meuse: The Netherlands and Wallonia 30%, France 15%, Germany 14.5%, Flanders 5%, Brussels 4.5%, Kingdom of Belgium and Luxemburg 0.5%.

The map of the basin area of Meuse was joined to the text of the treaty.[2]

On the cultural plan, the river Meuse, as a major communication route, is the origin of the Mosan art, principally (Wallonia and France).

The first landscape painted in the Middle-Age was the landscape of Meuse. For instance Joachim Patinir [3] He was likely the uncle of Henri Blès who is sometimes defined as a Mosan landscape painter active during the second third of the 16th century (i.e., second generation of landscape painters) [4]

The main tributaries of the river Meuse are listed below in downstream-upstream order, with the town where the tributary meets the river: 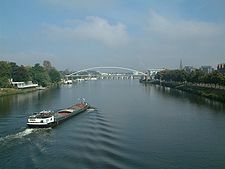 The Meuse (Maas) at Maastricht 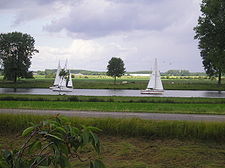 The mean annual discharge rate of the Meuse has been relatively stable over the last few thousand years. One recent study estimates that average flow has increased about 10% since 2000 BC.[5] The hydrological distribution of the Meuse changed during the later Middle Ages, when a major flood forced it to shift its main course northwards towards the Merwede river. From then on, several stretches of the original Merwede were named "Maas" (i.e. Meuse) instead and served as the primary outflow of that river. Those branches are currently known as the Nieuwe Maas and Oude Maas.

However, during another series of severe floods the Meuse found an additional path towards the sea, resulting in the creation of the Biesbosch wetlands and Hollands Diep estuaries. Thereafter, the Meuse split near Heusden into two main tributaries, one flowing north to join the Merwede, and one flowing directly to the sea. The branch of the Meuse leading directly to the sea eventually silted up, (and now forms the Oude Maasje stream), but in 1904 the canalised Bergse Maas was dug to take over the functions of the silted-up branch. At the same time, the branch leading to the Merwede was dammed at Heusden, (and has since been known as the Afgedamde Maas) so that little water from the Meuse now actually enters the old Maas estuary, or the current Rhine distributaries. The resulting separation of the rivers Rhine and Meuse is considered to be the greatest achievement in Dutch hydraulic engineering before the completion of the Zuiderzee Works and Delta Works.

One recent study [6] notes that the difference between summer and winter flow volumes has increased significantly in the last 100–200 years. These workers point out that the frequency of serious floods (i.e. flows > 1000% of normal) has increased markedly. They predict that winter flooding of the Meuse may become a recurring problem in the coming decades.

The Meuse (Maas) is mentioned in the (nowadays not sung) first stanza of the Deutschlandlied German national anthem. The lyrics written in 1841 describe a then–disunited Germany with the river as its western boundary, where King William I of the Netherlands had joined the German Confederation with his Duchy of Limburg in 1839. Though the duchy's territory officially became an integral part of the Netherlands by the 1867 Treaty of London, the text passage remained unchanged when the Deutschlandlied was declared the national anthem of the Weimar Republic in 1922.