The origins of the Metro Subway lie in the Baltimore Area Mass Transportation Plan, published in 1965, which envisioned six rapid transit lines radiating out from a central city loop. Planning studies from 1968 proposed a rail transit system 71 mi (114 km) long.[3]

As the vision was translated into reality, the original concept was trimmed to a 28 mi (45 km) system in the Phase 1 plan, published in 1971. This plan involved two of the original six lines: a northwest line from Downtown Baltimore to Owings Mills and a south line to Glen Burnie and the airport. Phase 1 was approved for funding by the Maryland General Assembly in 1972. In response to crime concerns of Anne Arundel County residents, the MTA eliminated the south line from Phase 1 plans in 1975.[3]

When the Baltimore Metro opened on November 21, 1983, only the "Northwest" line of the 1965 plan had come to fruition. This 12.2 km (7.6 mi) segment provided service between Charles Center in Downtown Baltimore and Reisterstown Plaza in the northwest section of the city. In 1987, a 9.8 kilometres (6.1 mi) addition extended the line from Reisterstown Road Plaza to Owings Mills in Baltimore County, much of it running in the median of I-795. A further extension of 2.5 km (1.6 mi) from Charles Center to Johns Hopkins Hospital was opened in 1994.[4][2] 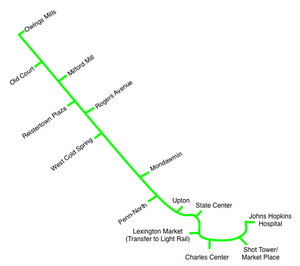 The Metro Subway's route consists of a single line in a shape that can be described as an extremely lopsided "U". Trains head due south underground from Johns Hopkins Hospital, turn west as they pass under Baltimore's central business district, then north and ultimately northwest towards Owings Mills. The route leaves its tunnel northwest of Mondawmin station, entering an elevated structure that parallels Wabash Avenue and the Western Maryland Railroad. The route eventually leaves the older railroad right of way to enter the I-795 median, which it occupies all the way to the system's Owings Mills terminus.

Trains heading for Johns Hopkins Hospital are referred to as "eastbound" trains, while trains heading towards Owings Mills are said to be "westbound".[5]

Most Metro Subway stations are served by a number of MTA bus routes. In 1984, just months after Metro first started operating, many feeder routes were created that were given the designation of a letter (M, P, or R) followed by a number. In 1987, many of these routes were renamed, and only the prefix "M" was used. Over the years, the number of M-lines has shrunken, as many of the routes were consolidated. In 2008, routes that were designated with the letter "M" have been renamed to plain two-digit designations. Finally, on August 30, 2009, the last four were either renumbered or eliminated, with no routing changes made; they continue to act as feeder routes to the Metro Subway. 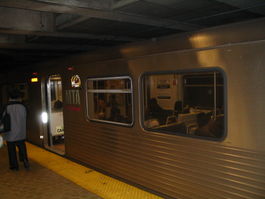 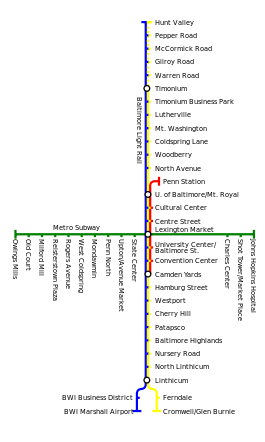 Light Rail and Metro Subway map (not to geographical scale) 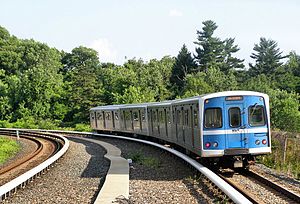 The Baltimore Metro's cars were manufactured by the Budd/TransitAmerica Red Lion plant in Northeast Philadelphia. Most were delivered in 1983, with a supplementary set of essentially identical cars being purchased in 1986 for the line expansion. The cars, marketed by Budd as the Universal Transit Vehicle, are identical to those used on the Miami Metrorail, because the two agencies built their systems at the same time and saved money by sharing a single order.[3]

These cars were among the last railcars to be built by Budd before the firm shut down.

The Baltimore Metro fleet had a significant overhaul between 2002 and 2005. Car seats were replaced and the floors reupholstered. External destination rollsigns were replaced with LED displays, and internal systems that displayed and announced train destinations and upcoming stops were installed.

The MTA currently owns 100 Metro Subway cars;[1] approximately 54 are in use during peak weekday travel times.

Consideration has been given for an extension, from the Metro Subway's Johns Hopkins Hospital terminus northeast to Morgan State University, dubbed the Green Line (which reflects the Metro Subway's color on MTA Maryland maps). Due to the expected high cost of building it as an extension of the existing Metro Subway (which would require tunneling in densely populated neighborhoods), the extension may take the form of a connecting light rail or bus rapid transit service. As of 2011, plans have not progressed.[7]