Metro comes from the Javanese word mitro, meaning friend.[1][2] The name was chosen to remind the migrants to work together.

Prior to 1936, Trimurjo was part of Gunungsugih onder distric;[3] it was isolated, without much influence from the indigenous Lampungese people.[4] However, beginning in 1936 the Dutch colonial government sent Javanese migrants to colonise the area, which served to relieve overpopulation on Java, and mitigate the influence of Indonesian independence activists.[5] The first group arrived on 4 April 1936.[6]

On 9 June 1937, the name of the area was changed from Trimurjo to Metro[1] and that same year it was established as an onder distric, with Raden Mas Sudarto as the first assistant district chief. During this same period the Dutch colonial government built more roads, as well as a clinic, police office, and administrative offices.[7] By 1941 a mosque, post office, large market, and inn had been built, and electricity and telephone lines had been installed.[8]

Development soon outpaced the natural irrigation capabilities of the area. To ensure proper healthy crops, the Dutch hired Ir. Swam to design an irrigation system. His design called for a levee as well as a 30 metres (98 ft) wide and 10 metres (33 ft) deep irrigation canal from Way Sekampung River to Metro. Labour was provided by the migrants, who were conscripted and worked in shifts. Construction began in 1937 and was finished in 1941.[9]

After the Japanese invasion of Indonesia in 1942, all Dutch personnel were evacuated or captured.[10] The migration program was continued under the name imin kakari,[11] and seventy Javanese migrants were used as forced labour in the construction of the nearby Natar and Astra Ksetra airstrips as well as numerous bunkers and other strategic assets; those who resisted were shot.[10]

The remaining citizens were malnourished, with their harvests being taken by the Japanese occupying forces. Diseases spread rampantly throughout the populace, carried by ticks. Deaths were common, as were women, including wives of the forced labourers, being taken as comfort women.[11]

During the Indonesian war of independence, the Dutch attempted to retake Metro. When they first arrived, they were unable to enter as the bridge to the city in Tempuran had been destroyed by a 26-man troop of the Indonesian army, under the command of Second Lieutenant Bursyah; the Dutch convoy was forced to retreat. However, the following day the Dutch returned in greater numbers and attacked from Tegineneng, eventually entering the city and killing three Indonesian soldiers.[12]

Upon entering the city, the Dutch forces were besieged by sabotage by 41 soldiers under the command of Second Lieutenant Raden Sudarto. After chasing Sudarto’s forces throughout the area, the Dutch continued to Palembang. Despite an extended guerrilla campaign by the Indonesian military, the Dutch eventually retook Metro in 1949, surrendering it that same year.[13]

After the war, Metro continued to develop. In 1956, its government was stylized as a negeri based on Governor’s Decree Number 153/D/1956. This lead to adat lands being owned by the local government.[14]

In 1976 Metro became the capital of the newly formed Central Lampung Regency, which at the time included parts of present-day East Lampung Regency.[15] 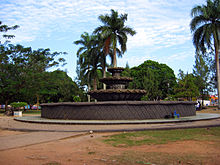 This fountain was among the additions to the town square

Beginning in 1985, the local government began working to stimulate the economy. Retail chains began entering the city, a movie theatre and stadium was built, the town square was redesigned as a park, and Cendrawaish market was renovated.[16]

On 14 August 1986, Metro was designated an administrative city, in accordance with Government Decree Number 34 of 1986, with the formal ceremony taking place on 6 September 1987.[17]

Metro is spread over an area of 68.74 square kilometres (26.54 sq mi),[22] with the built up area consisting of 24.57% of the city, or 16.88 square kilometres (6.52 sq mi).[23] As of 2010, it has a population of 145,471, with a density of 2,116.2 people per km2 (5,480.9/sq mi).[24] It is built around the Dutch land use planning system. Its economic and political hub is in the center, in the area around the city park. All five provincial and national roads that transect Metro meet in this area.[25] Northern Metro is a residential area, while western Metro is used for commercial space, southern Metro for agriculture, and parts of southern and eastern Metro for educational and other public facilities.[26]

The land in Metro is relatively flat, with an elevation between 30 to 60 metres (98–200 ft).[27] When it was first settled, the area was heavily forested; there are still pockets of forest within the city limits.[6]

When Metro was originally made an autonomous city, it had two kecamatan, or subdistricts, Metro Raya and Metro Bantul.[18] However, it now has five.[27]

The third largest economic sector is agriculture, contributing 17.31% of the 2002 income.[29] Within the city boundaries there are 3,342 hectares of rice fields, capable of producing up to 16,598 tons of rice per growing season.[31]

Metro is served by three hospitals: Ahmad Yani General Hospital, Mardi Waluyo Hospital, and Metro Islamic Hospital. As of 2003, the total number of health care practitioners in Metro is 382, including 13 specialists, 30 general practitioners, 36 midwives, 121 nurses, and 8 dentists. There are also 19 pharmacies and 8 drug stores.[32]

There are ten tertiary education facilities located in Metro, namely[29]: