The International Extreme Truck or XT is a vehicle line comprising three very large pickup trucks, built on the same chassis from International from 2004-2008. The company expected business owners to account for most sales. However, due to multiple issues, International discontinued the XT line of trucks in 2008.[1][2][3]

The CXT is built on an International 7300 chassis and is equipped with the DT 466 diesel engine and is capable of towing up to 20 tons while its air-ride cab and individual bucket seats offer a smooth ride for the driver and 4 adult passengers. The CXT's interior includes luxury options such as DVD and satellite radio.[3] Materials for seats and other upholstery items included leather and ostrich skin. Mechanical features include air brakes, an Allison 2500HD automatic transmission, and 4 wheel drive. The CXT uses a Meritor MTC 4208 two-speed transfer case. The CXT gets 8-10 miles per gallon, and has a 70 gallon tank.[3] The CXT is priced from $93,000 to $115,000.[3]

The CXT was built at the company's assembly plant in Garland.[2] The pickup beds were supplied by Ford Motor Company who also used them on their Ford Super Duty pickup trucks.

The International RXT or Recreational Extreme Truck was the second XT variant introduced. It sits slightly lower than the CXT, and is rear wheel drive through an Allison 2200 Series 5-speed Automatic Transmission.[5][3] Introduced at the 2005 Chicago Auto Show, it is targeted at equestrian and boat owners.[5] It is built on an International 4400 chassis and is powered by an International VT 365 engine.[5] Price range varies from $70,000–$90,000.[5] Its GVWR is 20,500 lb (9,300 kg).[5] Brakes are hydraulic 4-wheel discs.[5] 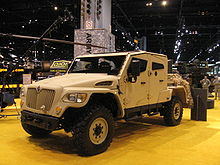 The International MXT or Military Extreme Truck debuted as a concept vehicle at the 2005 Chicago Auto Show alongside the RXT.[5] In 2006, a pre-production prototype was shown, followed in 2007 by the production version, along with a special edition MXT Limited.[6] The cab is lowered and the truck is fitted with International's 300 hp (224 kW) VT 365 Diesel V8 and the Allison 2000 transmission. The MXT's price range varies from $89,500 to $130,000.[7] The GVWR is 14,000 lb (6,400 kg).[8] The vehicle has a 40 gallon fuel tank, and gets 13-15 miles per gallon (9-11 MPG is what owners are reporting).[9] The MXT-MV is a derivative of the MXT, sold exclusively for military purposes. For another image, follow the link:Full-Length Side View of a Blue MXT International Truck

Like many vehicle manufacturers, International created a luxury concept of the XT line similar to the RXT. It featured dual skylights, more aerodynamic body molding with air intakes in front of the rear wheels and stylish molded steps on both sides to match, a high-mounted spoiler behind the cab, and fog lights. The interior offered many different upholstery materials along with mood lighting, a DVD player, multiple viewing screens, and a mini refrigerator. The engine was a 300 hp version of the RXT's.[10] Project XT never made it to the production line.