Substituted amphetamines are a chemical class of stimulants, entactogens, hallucinogens, and other drugs. They feature a phenethylamine core with a methyl group attached to the alpha carbon resulting in amphetamine, along with additional substitutions. Examples of amphetamines are amphetamine (itself), methamphetamine, ephedrine, cathinone, MDMA ("Ecstasy"), and DOM ("STP").

Amphetamine derivatives occur in nature, for example in the leaves of Ephedra and khat plants. These have been used since antiquity for their pharmacological effects. Amphetamines were first produced synthetically at the end of the 19th century. By the 1930s such synthetic amphetamines found use as decongestants in the symptomatic treatment of colds and also occasionally as psychoactive agents. Their effects on the central nervous system are diverse, but can be summarized by three overlapping types of activity: psychoanaleptic, hallucinogenic and empathogenic. Various amphetamines may cause these actions either separately or in combination. Improper consumption of amphetamine derivatives may result in addiction and aggressiveness, as well as in rapid deterioration of basic body functions and death. Therefore, production and distribution of most related drugs are controlled by the authorities both nationally and internationally.

Although the basic compound of the class, amphetamine, was synthesized earlier, Ephedra was used 5000 years ago in China as a medicinal plant; its active ingredients are alkaloids ephedrine, pseudoephedrine, norephedrine (phenylpropanolamine) and norpseudoephedrine (cathine). Natives of Yemen and Ethiopia have a long tradition of chewing khat leaves to achieve a stimulating effect. The active substances of khat are cathinone and to a lesser extent cathine.[1]

Amphetamine was first synthesized in 1887 by Romanian chemist Lazăr Edeleanu and did not attract special attention.[2] MDMA was produced in 1912 (according to other sources in 1914[3]) as an intermediate product. However, this synthesis also went largely unnoticed.[4] In the 1920s, both methamphetamine and an optical isomer of amphetamine dextroamphetamine (D-amphetamines) were synthesized. This synthesis was a by-product of a search for ephedrine, a bronchodialator used to treat asthma extracted exclusively from natural sources. Over-the-counter use of amphetamines was initiated in early 1930s by the pharmaceutical company Smith, Kline & French (now part of GlaxoSmithKline), as a medicine (Benzedrine) for colds and nasal congestion. Subsequently, amphetamine was used in the treatment of narcolepsy, obesity, hay fever, orthostatic hypotension, epilepsy, Parkinson's disease, alcoholism and migraine.[2][5] The "reinforcing" effects of amphetamines were quickly discovered, and the misuse of amphetamines had been noted as far back as 1936.[5]

During World War II, amphetamines were used by the German military to keep their tank crews awake for long periods, and treat depression. It was noticed that extended rest was required after such artificially induced activity.[2]

The widespread use of amphetamines began in the postwar Japan and quickly spread to other countries. Modified ("designer"), amphetamines gained popularity since 1960s, such as MDA and PMA.[5] MDMA was rediscovered and popularized by the American chemist Alexander Shulgin in 1965, after which it was used for some time in psychotherapy sessions.[4] In 1970, the United States adopted "the Controlled Substances Act" that limited non-medical use of amphetamines.[5] Street use of PMA was noted in 1972,[6] and in 1985, MDMA was banned by the US authorities in an emergency scheduling initiated by the US Drug Enforcement Agency.[7]

Since the mid 1990s, MDMA ("ecstasy") became a popular entactogenic drug among the youth and quite often non-MDMA substances were sold as "ecstasy".[8] In the first legally sanctioned trials in the USA in over twenty years, the safety profile of MDMA has been demonstrated, and it has been shown to be a successful adjunct to psychotherapy in the management of treatment-resistant Post-Traumatic Stress Disorder (PTSD) in victims of sexual abuse and sufferers of other conditions.[9]

Effects of amphetamines on the central nervous system are diverse and can be attributed to the three main classes:

Studies on animals have shown that these classes of effects are independent. Various amphetamines may cause these actions, either separately or in combination; for example, amphetamine adds hallucination effect at high doses (amphetamine psychosis), however this is quite different than the 'hallucinongenic' phenomena that are typically associated with what are often commonly referred to as the psychedelic amphetamines.[13][14][15] The stimulating effect of amphetamine is similar to that of cocaine, but lasts longer.[16] 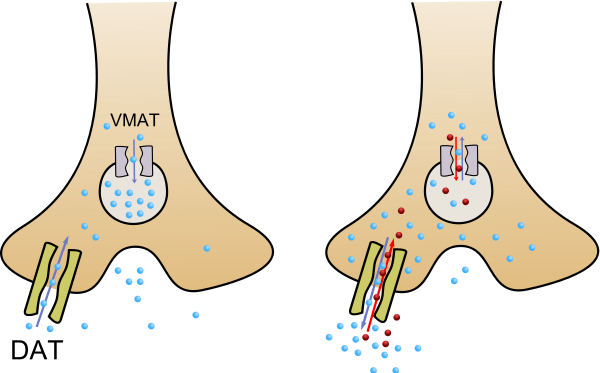 Inhibitors of reuptake of monoamines, such as cocaine, reduce the emission of monoamines, caused by amphetamine-type stimulants.[19] Effects of hallucinogenic amphetamines is similar to other classical hallucinogens and is related to their agonism to serotonin receptor of the type 5-HT2A.[20] Also, lesser-known mechanisms possibly associated with hallucinogenic effects (in traditional plain stimulant and non-hallucinogen class amphetamines) may potentially include agonism of the trace amine-associated receptors (TAARs) and other functions of the amphetamine molecular skeleton in the CNS.

There is a relationship between the chemical structure of the amphetamine compound and its effects. Substitutions of the amino group enhance the stimulating effect of the substance, but may reduce other actions. Examples include methamphetamine and N-hydroxyamphetamine, which are more powerful stimulants than amphetamine.[12]

Replacing methyl group in the position α to ethyl group reduces the stimulating and hallucinogenic actions, but does not affect the empathogenic action (as in MBDB) and suppression of appetite (as in phentermine).[8][13] Removing the methyl group in position α usually decreases the effectiveness of substance; thus, phenethylamine poorly penetrates the blood-brain barrier and is rapidly metabolized.[21] Substitutions in the phenyl group decrease the stimulating action, but may induce other effects.[22] Substitution in position 4 is usually associated with serotonergic action.[8]

Right-handed (dextrorotatory) enantiomers of amphetamines, such as dextroamphetamine, are usually 4–10 times more potent than left-handed, with the exception for MDMA and a few related substances whose efficiency does not depend on the isomerism.[8]

The effect of amphetamines on the autonomic nervous system is mainly due to emissions of norepinephrine. This enhances stimulation of α-and β-adrenoreceptors that can lead to tachycardia (increased heart rate), elevated blood pressure, mydriasis (dilated pupils), sweating and hyperthermia (elevated body temperature).[16][18]

Acute toxicity of amphetamines is primarily related with their impact on the central and peripheral adrenergic receptors. Regarding central nervous system, it can manifest itself as psychosis, visual and tactile hallucination and anxiety. The effects on cardiovascular system are expressed as tachycardia and increased blood pressure. The immediate causes of death from the use of amphetamines are usually hyperthermia, heart arrhythmia or stroke.[16]

Unlike many other drugs, amphetamine and especially methamphetamine are neurotoxic and can irreversibly damage dopaminergic and serotonergic neurons. It is believed that the toxic effect of amphetamines on dopaminergic neurons is associated with the formation of free radicals and peroxynitrite, which is a strong oxidizer. MDMA, moreover, reduces concentration of antioxidants glutathione and vitamin E in the brain, and is therefore neurotoxic in high doses. Whether or not MDMA is neurotoxic as a result of prolonged use in normal doses is being debated.[18][23][24]

After prolonged use, amphetamines, except for classical hallucinogens,[25] can induce strong addiction that can last up to several weeks. Some energy drinks contain small levels of amphetamines depending on size and quantity; which can be mistaken in few drug test, depending on time, and amount of consumption.[26] It is believed that psychological dependence on amphetamines, as well as on other drugs, is associated with stimulation by the drug of dopaminergic neurons in the ventral tegmental area. Those neurons are responsible for feelings of reward that affect the processes of learning and adaptation.[27]

Physical dependence on amphetamine-type stimulants is controversial. Interruption after their prolonged use results in fatigue, depression, sleepiness and feeling of hunger. These symptoms may be regarded as components of withdrawal syndrome or just as normal response of the body to the lack of sleep and food that accompanies systematic use of amphetamine-type stimulants.[28]

Classic hallucinogens (such as DOM) do not cause addiction.[25] Laboratory animals which were taught to use stimulants did not use hallucinogens on their own initiative.[21]

Production, distribution and use

Treatment of amphetamine poisoning and addiction

One of the most dangerous manifestations of overdose with amphetamine-type stimulants are hyperthermia and hyperactivity which can cause various types of damage in skeletal muscles. Therefore, first aid in such overdose cases includes the physical immobilization of the patient, to prevent possible harm to the patient or others, and sedation by intravenous injection. Hyperthermia is reduced with external cooling and some measures might be taken to increase urination, in order to excrete the poison.[38]

Treatment of addiction to amphetamine and its derivatives are similar to those for other stimulants such as cocaine. Because of the weak physical effect of amphetamine addiction, the use of amphetamines is interrupted abruptly instead of gradually reducing the drug dose.[39][40]

The major symptoms of psychological addiction are depression, feeling of boredom and nostalgia for the pleasure associated with the drug. The treatment is usually based on individual work with the patient and the patient's desire to quit drug use.[41] Despite ongoing intensive search, by 2008, efficient medical treatment has not been available.[42] Although the tests are far from complete,[43] some positive results were achieved with the following drugs:[44]

Most amphetamines are synthetic compounds.[18] Exceptions include cathinone which is present in khat leaves and ephedrine and pseudoephedrine, the active components of Ephedra. These natural alkaloids have a much weaker effect than the amphetamine.[45][46]

From ephedrine and its derivatives

Methamphetamine can be obtained through one of the following redox reactions of ephedrine.[47] Ephedrine itself can be extracted from Ephedra.

Safrole – the main component of the Sassafras oil – is used for the synthesis of MDA, MDMA and other amphetamines containing methylenedioxyphenyl group as follows:[51]

From phenyl-2-propanone (P2P) and its derivatives

Methamphetamine can be produced by reacting phenyl-2-propanone and (P2P) with methylamine in the presence of aluminium amalgam.[52]

P2P itself is usually obtained from phenylacetic acid and acetic anhydride.[53]

Similarly, MDA or MDMA can be produced from 3,4-methylenedioxyphenyl-2-propanone (MDP2P),[54] and the MDP2P can be obtained from piperonal.[55]

From benzaldehyde and its derivatives

Amphetamines can be synthesized by condensation of benzaldehyde with nitroethane using amine as a catalyst, followed by reduction using, e.g. lithium aluminum hydride.[56][57] Derivatives of benzaldehyde are used in reactions occurring via substitution of the phenyl group of benzaldehyde. For example, piperonal is used for preparing MDA,[33] and it can in turn be extracted as alkaloid piperine present in black pepper.[58] 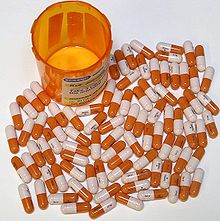 Adderall – a drug used in treating ADHD and narcolepsy, which includes levoamphetamine and dextroamphetamine 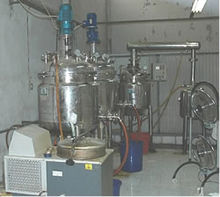 A setup for illegal production of MDMA

Currently, the application of amphetamines and their derivatives in medicine is very limited. Amphetamine, dextroamphetamine, methamphetamine and methylphenidate (Ritalin) are used in the treatment of narcolepsy and attention-deficit hyperactivity disorder.[5] Bupropion, a substituted cathinone with very weak psychostimulant properties relative to most chemicals of this class, is widely used as an atypical antidepressant and smoking cessation aid, under the brand names Wellbutrin and Zyban, and is also used off-label to treat attention-deficit hyperactive disorder.

UNODC estimates that between 15 and 50 million people used amphetamines at least once during the year of 2007, that constitutes 0.4–1.2% of the total population aged 15 to 64.[63] In Russia, amphetamines are the third most popular type of drug after marijuana and opiates.[64]

Because of potential abuse, distribution of amphetamines and their analogues are controlled by the authorities. Those substances are categorized into schedules I-V. Schedule I substances may be used only for scientific or very limited medical purposes with a special license; those substances may not be sold to individuals, even with a prescription. Turnover of substances from Schedule II is allowed under strict control.[65]