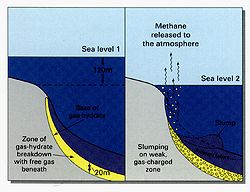 A methane chimney or gas chimney is a rising column of natural gas, mainly methane within a water or sediment column. Large deposits of frozen methane, when thawing, release gas into the environment.[1] In cases of sub-sea permafrost, the methane gas may be dissolved in the seawater before reaching the surface. However, in a number of sites around the world, these methane chimneys release the gas directly into the atmosphere, contributing to global warming.[2] In some locations along Russia’s northern coast, methane rising from the sea floor to the surface has caused the sea to foam.[3] In hydrocarbon exploration, gas chimneys revealed on seismic reflection data are indicators of active gas migration[4] and a working petroleum system.

Trees in swampy, low-laying areas can actually conduct methane produced in soils up through their stems and out their leaves. It has been known for years that plants in bogs and marshes also act in this way. This accounts for approximately 60 teragrams, or about 10% of global annual production.[5]