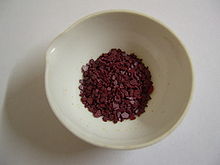 An example of a chromium(VI) compound: chromium trioxide

Hexavalent chromium is recognized as a human carcinogen via inhalation.[2] Workers in many different occupations are exposed to hexavalent chromium. Problematic exposure is known to occur among workers who handle chromate-containing products as well as those who perform welding, grinding, or brazing on stainless steel.[2] Within the European Union, the use of hexavalent chromium in electronic equipment is largely prohibited by the Restriction of Hazardous Substances Directive.

Hexavalent chromium compounds are genotoxic carcinogens. Chronic inhalation of hexavalent chromium compounds increases risk of lung cancer (lungs are especially vulnerable, followed by fine capillaries in kidneys and intestine). Soluble compounds, like chromic acid, are much weaker carcinogens.[3] Chromate-dyed textiles or chromate-tanned leather shoes can cause or exacerbate contact dermatitis. Ingestion of chromium VI can also cause irritation or ulcers in the stomach and intestines.[4]

For drinking water, no United States EPA Maximum Contaminant Level (MCL) exists. California has finalized a Public Health Goal of 0.02 parts per billion (ppb or micrograms per liter) [7] and is now in the process of establishing an enforceable MCL.

Hexavalent Chromium was released as a gas from the Newcastle Orica explosives plant on the 8th August 2011. Up to 20 workers at the plant were exposed to the gas and 70 nearby homes in Stockton. The town of was not notified until 3 days after the release of the Hexavalant Chromium and a slight uproar of the townsfolk occurred. [8]

In 2010, the Environmental Working Group studied the drinking water in 35 American cities. The study was the first nationwide analysis measuring the presence of the chemical in U.S. water systems. The study found measurable hexavalent chromium in the tap water of 31 of the cities sampled, with Norman, Oklahoma, at the top of list; 25 cities had levels that exceeded California's proposed limit.[9]

The United States Environmental Protection Agency set a standard of no more than 0.1 mg/L of total chromium in 1991. This includes both chromium VI and less toxic forms. There is currently no drinking water limit established by the EPA specifically for Chromium VI. The agency began a toxicology study in 2008, following a report by the National Toxicology Program.[10] EPA released a draft scientific assessment in September 2010[11] and expects to begin rulemaking in 2011 or 2012 based on the final assessment.[10][12]

Hexavalent chromium was found in drinking water in the southern Californian town of Hinkley and was brought to popular attention by the involvement of Erin Brockovich. The 0.58 ppm Chromium VI in the groundwater in Hinkley exceeded the Maximum Contaminant Level (MCL) of 0.10 ppm for total Chromium currently set by the United States Environmental Protection Agency (EPA).[15] It also exceeded the California MCL of 0.05 ppm (as of November 2008). [16] Note that since no MCL exists for Chromium VI the total Chromium standards apply.

A controversial study claimed that from 1996 to 2008, 196 cancers were identified among residents of the census tract that includes Hinkley — a slightly lower number than the 224 cancers that would have been expected given its demographic characteristics.[17][18] 196 cases over 12 years for a population of 1915 equates to roughly 853 cases per 100k population per year. By comparison San Bernadino County averaged 359/100k/yr over the same period.[19]

Average Cr(VI) levels in Hinkley were recorded as 1.19 ppb with a peak of 3.09 ppb. The PG&E Topock Compressor Station averaged 7.8ppb and peaked at 31.8ppb.[20] Compare to the California proposed health goal of 0.06 ppb. The same day the study came out, the plume of contaminated water was reported to be spreading.[21] Ongoing cleanup documentation is maintained at California EPA's page.

In June 2009, the ground water in Midland, Texas (U.S.), was found to be contaminated with chromium. The Midland groundwater reached higher levels of contamination than in Hinkley with 5250 ppb or 5.25 ppm.[22]

The Unified Air Pollution Control District reported high airborne levels of chromium(VI) at an elementary school and fire department in Davenport, California. The substance apparently originated from a local Cemex cement plant. The levels of chromium(VI) were eight times the air district's acceptable level at Pacific Elementary School and ten times at the Davenport Fire Department.[23] The levels detected did not exceed EPA limits. However, the air samples taken by the air district from June to August at the elementary school and fire department in Davenport registered measurements of hexavalent chromium that were up to ten times higher than allowed by Californian environmental standards.[24] The case highlights the previously unrecognized possible release of chromium(VI) from cement-making.[24][25]

In Chicago's first ever testing for the toxic metal contaminant, results show that the city's local drinking water contains levels of hexavalent chromium more than 11 times higher than the health standard set in California in July of 2011. The results of the test showed that the water which is sent to over 7 million residents had average levels of .23 parts per billion of the toxic metal. California's Office of Environmental Health Hazard Assessment designated the nation's new "public heath goal" limit as .02 parts per billion. Echoing their counterparts in other cities where the metal has been detected, Chicago officials stress that local tap water is safe and suggest that if a national limit is adopted, it likely would be less stringent than California's goal.

On January 7, 2011 it was announced that Milwaukee, Wisconsin had tested its water and hexavalent chromium was found to be present. Officials are saying it is in such small quantities that it is nothing to worry about, although this contaminant has been linked to cancer (In the draft human health assessment for chromium-6 that was released in September 2010 by EPA for independent expert peer review and public comment, EPA is proposing to classify hexavalent chromium (or chromium-6) as likely to cause cancer in humans when ingested over a lifetime. EPA will make a final determination by the end of 2011.).[28] Further testing is being conducted and is expected to be completed by the end of the year.[29]

In 2009, a lawsuit was filed against Prime Tanning Corporation of St. Joseph, Missouri, over alleged hexavalent chromium contamination in Cameron, Missouri. A cluster of brain tumors had developed in the town that was above average for the population size of the town. The lawsuit alleges that the tumors were caused by waste hexavalent chromium that had been distributed to local farmers as free fertilizer. Legal proceedings are still ongoing[30]

By using the GFAAS for total chromium, diphenylcarbazide-Cr(VI) complex colorimetric method for hexavalent chromium, and flame-AAS and ICP-MS for other toxic elements, their concentrations were investigated in several groundwater samples. The contamination of water by hexavalent chromium in central Euboea is mainly linked to natural processes, but there are anthropogenic cases.[34]

In the Thiva – Tanagra – Malakasa basin, Eastern Sterea Ellada, Greece,[35] which supports many industrial activities, concentrations of chromium (up to 80 μg/L Cr(VI)) and Inofyta (up to 53 μg/L Cr(VI) were found in the urban water supply of Oropos. Cr(VI) concentrations ranging from 5 to 33 μg/L Cr(VI) were found in groundwater that is used for Thiva's water supply. Arsenic concentrations up to 34 μg/L along with Cr(VI) levels up to 40 μg/L were detected in Schimatari's water supply. In the Asopos River, total chromium values were up to 13 μg/L, hexavalent chromium was less than 5 mg/L and other toxic elements were relatively low. [35]