Metallurgy during the Copper Age in Europe

Metallurgy during the Copper Age in Europe

The Copper Age, also called the Eneolithic or the Chalcolithic Age, has been traditionally understood as a transitional period between the Neolithic and the Bronze Age, in which a gradual introduction of the metal (native copper) took place, while stone was still the main resource utilized. Recent archaeology has found that the metal was not introduced so gradually and that this entailed significant social changes, such as hierarchical leadership, developments in the type of habitation (larger villages, launching of fortifications), long-distance trade, and copper metallurgy.

Roughly, the Copper Age could be situated chronologically between the 5th and 6th millennium BC, in places like the archaeological sites of Majdanpek, Јarmovac and Pločnik (a copper axe from 5,500 BC belonging to the Vinča culture)[1] and Rudna Glava[2] Mine in Serbia and Ai Bunar Mine in Bulgaria[3] (5th Millennium BC) and the from third millennium BC, in places like Palmela (Portugal), Cortes de Navarra (Spain), and Stonehenge (United Kingdom). However, as often happens with the prehistoric times, the limits of the age cannot be clearly defined and vary with different sources.

Inception of metallurgy in Europe

The theory that metallurgy was exported to Europe from the Near East has been practically ruled out. A second hypothesis, that there were two main points of origin of metallurgy in Europe, in southern Spain and the Balkans, is also doubtful due to the existence of sites outside the centers of diffusion where metallurgy was known simultaneously with, or before, those in the ‘original’ nuclei, such as Brixlegg (Tyrol, Austria), while sites closer to the supposed origins of metallurgy, such as in the north of Spain, show fewer metal artifacts than sites in the south and practically no evidence of production (Perez Arrondo 1986).

Nowadays the general opinion is that the development of metallurgy took place independently in different places, at different times, with various techniques. One fact that supports this interpretation is that although the final products (beads, rings, sickles, swords, axes, etc.) are quite similar throughout Europe, the method of production is not. Thus the use of crucibles was the technique utilized in the south of Spain, whereas central Europe employed a slagging process, but Cabrierés (France) used a primitive oxidizing non-slagging process (Bourgarit, et al. 2003), while in the British Isles the absence of debris, slag or ceramic suggests another technique (Craddock 1995).

Consequently, the way in which metallurgy was initiated differs considerably depending on the region. There are areas in which copper seems to play a crucial role (i.e., the Balkans), whereas other areas show no interest in it at all. Then there are societies that use copper artifacts but do not practice metallurgy (Mohen 1992; 71), and there are other ones that fully adopt some of the cultural innovations but ignore the rest. One example of the latter is Basque country in northern Spain, where splendid large dolmens are present along the Ebro river, but metal is rather infrequent, and when it does appear between the trapping, it is more often bronze or arsenical copper than copper (Cava 1984).

Reasons to use copper

Copper is the eighth most abundant metal in the Earth's crust, available all over the world and one of the few that can appear in pure state (Atkinson 1987). It is not complicated to work with, a bare hammering can be enough to transform a nugget into a bead. The eye-catching look of the native copper makes it easy to recognize, and even flashier if converted into jewelry, a possible motivation for humankind to start the metallurgy with it. An evolutive technological process (Coghlan 1975, Mohen 1992; 48) has been described, although there are authors like Javinovic (Mohen 1992; 52) who think that it is not necessary to pass through the first stages to reach the last one.

To start with, the raw material must be obtained. Copper can be found in over 160 different minerals (Atkinson 1987), but mining activities are entailed to obtain them in large quantities if a reasonable amount of copper is wanted. Some of the most commonly exploited minerals are the cuprite, malachite, azurite, chalcopyrite, chrysocolla and tennantite, e.g. malachite was extracted in Rudna Glava (Serbia), Cabrierés (France) or Chinflón (Riotinto, Spain). In fact, one of the possible explanations about what Ötzi the Iceman, the ancient mummy found in the Alps who lived around 3300 years BC, was doing at 3,210 metres (10,530 ft) of altitude is that he could have been prospecting for new ores of minerals (Peroni 1996; 336).

Secondly, the mineral is separated from the gangue. This is only possible by smelting or beneficiation. To do so, using an appropriate furnace that is able to reach at least 1,089 °C (1,992 °F) is necessary.

Lastly, a wide range of specific tools and resources have to be available, such as furnaces, moulds, crucibles, mauls, etc.

Minerals of copper were known from ancient times. In Crete, little fragments of malachite and azurite were powdered and used as make up or decorate ceramic in an early date such as 6000 BC (Mohen 1992).

Therefore, the minerals were not collected looking for the copper but for virtues like those mentioned or simply because of its brightness and colour, but this knowledge of the minerals is critical since they already knew how to recognize them and where to collect, when later started the systematic search for ores.

Numerous examples of mines are known all over Europe (Craddock 1980, Mohen 1992 and 1996, Shennan 1999, Bartelheim et al. 2003) from the east: Rudna Glava (Serbia), Ai Bunar (Bulgaria); to the west: Mount Gabriel (Ireland), Great Orme, Alderley Edge (United Kingdom); crossing Central Europe: Mitterberg (Salzach, Austria), Neuchâtel (Switzerland), Cabrierés (France); to the south: Riotinto, Mola Alta de Serelles (Spain); and the Mediterranean: Corsica, Cyprus, and the Cyclades islands. It is remarkable that usually it is not a single mine but a complex, with a variable, large number of mineshafts, as in Rudna Glava (30) or Mount Gabriel (31).

The techniques observed in all of them are quite similar. Basically they used the thermic alteration or firesetting (Mohen 1992, Craddock 1995, Eiroa et al. 1996, Timberlake 2003). This consists in applying fire over the rock and then pouring water: the rapid changes of temperature will cause cracks within the rocks that can be totally broken with the help of mauls and picks. Then the useful masses were selected, crushed and transported to the production centre that could be in the surrounding area (Mitterberg) or far away (Rudna Glava).

The mines were exploited in extremely efficient and clever ways, according to the technology available (Jovanovic 1980, Craddock 1995, Timberlake 2003). The entire convenient mineral was collected and the abandon shafts carefully refilled with gangue and rocks (Mohen 1992; 85). For example, at Mount Gabriel, it was estimated that they extracted the astonishing number of 32,570.15 tonnes (35,902.44 tons) of rock, gangue and ore. The usable amount of copper was 162.85 tonnes and the final smelting finished metal was 146.56 tonnes (Jackson 1980; 24). The entire process was thoroughly described in 1744 by Lewis Morris, Crown Mineral Agent for Cardiganshire, and, incidentally, antiquarian (Timberlake, 2003, 22):

The tools employed are mainly presented in Lewis' observations, but other ones have been recovered in archaeological context:

The information available about the people of the Copper Age has not substantially increased along with the number of archaeological sites. Several ideas have been proffered, one of the most followed is that the metal itself did not bring abrupt transformation into the people's life (Cunliffe 1998) or even more that ‘early copper does not produce anything useful at all’ (Renfrew 1986, 146), meaning with this that with the copper, they produced mainly jewellery and, overall, weapons that obviously were not within reach of the majority of the population but only to privileged individuals. In other words, the real importance of the metal is not utilitarian but social. This is a suitable explanation about the rising of Great Cultures of Metal such as Vinča culture (Ex-Yugoslavia) Tiszalpogar and Unetice culture (Central Europe), Remedello and Rinaldone (Italy), Montagne Noire (France), El Argar and Targas (Spain), etc. 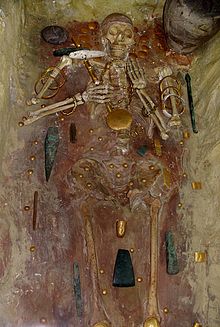 As the period moved forward, especially around the Third Millennium, new and complex realities would appear strongly linked to the metal, like the impressive fortified villages of Los Millares (Spain), Vila Nova de Sao Pedro (Portugal) or the more modest cairn next to Copa Hill (United Kingdom) apparently destinated to control the centres of extraction, or the equally stunning and generalized cultural phenomenons of Megalithism, Rock Art, Bell Beakers Vessels… that are known from Scandinavia to the South of Spain and from Scotland to Turkey.