The strength of metal oxide adhesion effectively determines the wetting of the metal-oxide interface. The strength of this adhesion is important, for instance, in production of light bulbs and fiber-matrix composites that depend on the optimization of wetting to create metal-ceramic interfaces[1] The strength of adhesion also determines the extent of dispersion on catalytically active metal.[1] Metal oxide adhesion is important for applications like complementary metal oxide semiconductor devices. These devices make possible the high packing densities of modern integrated circuits.

The majority of the entropy of metal oxidation reactions is in the O2(g) because the gaseous oxygen molecules have translation entropy which is not present in the solid phase. For this reason, the change in entropy (ΔS) for oxidation is most always negative because this reaction generates less disorder by creating a solid oxide layer from the solid metal and gaseous oxygen. The standard state change of enthalpy is relatively independent and thus the gradient of the change in Gibbs free energy as a function of temperature is linear. This dictates that an oxide becomes less thermodynamically stable with increasing temperature.

The ideal work of separation Wsep is the reversible work needed to separate the interface into two free surfaces.[2] Important as a state function depending on the mechanical properties.[2] It is referred to as ideal because when the two free surfaces create an interface, the concentration of the interface will only be identical to the bulk at the instant the surface is created. In order to reach chemical equilibrium, the process of diffusion will take place which will increase any measurement of the work of separation.[2] The work of adhesion is the reversible free energy change for making free surfaces from interfaces.[2] It is represented by the equation:

Wad is the work of adhesion

γmo is the surface energy between the two materials in contact

The following table gives some common metals and their corresponding surface energies. All the metals are face-centered cubic crystal structure and these surface energies correspond to the (100) surface plane.

Ellingham diagrams are generated according to the second law of thermodynamics and are a graphical representation of the change in the Gibbs free energy with respect to changing temperature for the formation of oxides.

Real surfaces may be macroscopically homogeneous, but their microscopic heterogeneity plays a crucial role in the relationship between the metal and its oxide.

A diagram showing different layers of transition metal oxides formed on the surface of a metal.

Certain transition metals form multiple oxide layers that have different stoichiometric compositions. This is due to the metal having different valency states that have fewer or greater electrons in the valence shell. These different valency states allow for multiple oxides to be formed from the same two elements. As the composition of the materials changes through diffusion, different oxides are able to stack up on one another. The adhesion in this situation involves the metal-oxide and oxide-oxide interfaces which add increasing complexity to the mechanics.[3]

Increasing surface roughness increases the number of dangling bonds at the metal-oxide interface. The surface free energy of a crystal face is:

where:
E is the binding energy of the material

T is the temperature of the system

S is the surface entropy of the material

The binding energy favors a smoother surface that minimizes the number of danging bonds, while the surface entropy term favors a rougher surface with increasing dangling bonds as the temperature is increased.[4] 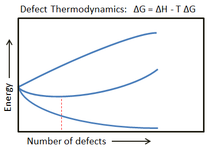 A graph depicting the presence of thermodynamic defects, specifically lattice vacancies, as determined by the lowest potential free energy. As the temperature increases, the equilibrium concentration of lattice vacancies grows.

Solid adsorption of an oxygen molecule depends on the heterogeneity of the substrate. Crystalline solid adsorption is dependent on the exposed crystal faces, grain orientations, and inherent defects because these factors provide adsorption sites with different steric configurations. Adsorption is largely determined by the reduction of gibbs free energy associated with the exposed substrate.

A material's charge remains neutral when a surface is created by the law of charge conservation, but individual Bravais lattice planes, defined by their Miller indices, may be non-polar or polar based on their symmetry. A dipole moment increases the surface gibbs free energy, but the greater polarizability of oxygen ions as compared to metals allows polarization to decrease the surface energy and thus increase the ability of metals to form oxides. Consequently, different exposed metal faces may adhere weakly to non-polar oxide faces, but be able to perfectly wet a polar face.

Surface defects are the localized fluctuations of surface electronic states and binding energies. Surface reactions, adsorption, and nucleation can be drastically affected by the presence of these defects.[5] 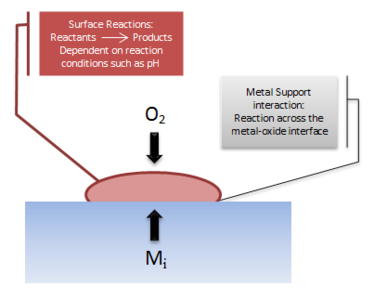 A figure demonstrating the surface adsorption of O2 based on surface reactions with the environment and the diffusion of the metal reactant to the reactive interface.

Oxide growth is dependent upon the flux (diffusion) of either coupled or independent anions and cations through the oxide layer.[6][7] Stoichiometric oxides have an integer ratio of atoms can only support coupled diffusion of anions and cations through the lattice migration of Schottky defects (paired anion/cation vacancies) or Frenkel defects (complete anion lattice with cation vacancies and intersticials).[6][7] Non-stoichiometric oxide films support independent ion diffusion and are either n-type (extra electrons) or p-type (extra electron holes). Although there are only two valence states, there are three types:[6][7]

Impurity elements in the material can have a large effect on the adhesion of oxide films. When the impurity element increases the adherence of the oxide to the metal it is known as the reactive element effect or RE effect. Many mechanics theories exist on this topic. The majority of them attribute the increase in adhesion strength to the greater thermodynamic stability of the impurity element bonded with oxygen than the metal bonded to the oxygen.[2][8] Inserting yttrium into nickel alloys to strengthen the oxide adhesion is an example of the reactive element effect.

The adsorption of a monolayer of gas atoms is either commensurate or incommensurate. Commensurate adsorption is defined by having a crystal structure relationship between substrate-adsorbate layer that produces a coherent interface. Wood's notation is a description of the relationship between the simplest repeating unit area of the solid and adsorbate. The difference between the resulting commensurate interfaces can be described as an effect of misfit. The interfacial interaction can be modeled as the

sg plus the stored elastic displacement energy due to lattice misfit. A large misfit corresponds to an incoherent interface where there is no coherency strain and the interface energy can be taken as simply the

sg. In contrast, a small misfit corresponds with a coherent interface and coherency strain that results in the interfacial energy equivalent to the minimum 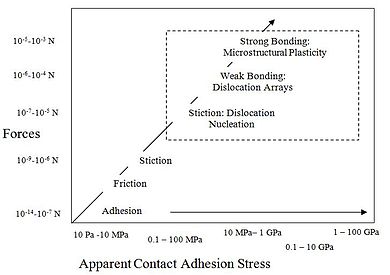 The strength of the bond between the oxide and metal for the same nominal contact area can range from Pa to GPa stresses. The cause of this huge range stems from multiple phenomena dealing with at least four different types of adhesion. The main types of bonding that form adhesion are electrostatic, dispersive (van der Waals or London forces), chemical and diffusive bonding. As the adhesive forces increase, separation in crystalline materials can go from elastic debonding to elasic-plastic debonding. This is due to a larger number of bonds being formed or an increase in strength of the bonds between the two materials. Elastic-plastic debonding is when local stresses are high enough to move dislocations or make new ones.[10]

When a gas molecule strikes a solid surface the molecule may either rebound or be adsorbed. The rate at which gas molecules strike the surface is a large factor in the overall kinetics of oxide growth. If there molecule is absorbed there are three potential outcomes. The surface interaction can be strong enough to dissociate the gas molecule into separate atoms or constituents. The molecule may also react with surface atoms to change its chemical properties. The third possibility is solid surface catalysis, a binary chemical reaction with a previously adsorbed molecule on the surface.

Most often it is kinetically favorable for the growth of a single oxide monolayer to be completed before the growth of subsequent layers. Dispersion in general can be modeled by:

Ns is the number of atoms on the surface

Nt is the total number of atoms in the material

Dispersion is crucial to the growth of oxides because only atoms that are exposed to the interface can react to form oxides.

After the initial oxide monolayer is formed, new layers begin to build and the ions must be able to diffuse through the oxide in order to increase thickness of the oxide. The rate of oxidation is controlled by how fast these ions are able to diffuse through the material. As the thickness of the oxide increases, the rate of oxidation decreases because it requires the atoms to travel a further distance. This rate can quantified by calculating the rate of diffusion of vacancies or ions using Fick’s first law of diffusion.[11]

where:
J is the flux and has units of mol·m−2·s−1
D is the diffusivity of the ions in the material

In 2007 the Nobel Prize in chemistry was awarded to Gerhard Ertl for the study of solid-gas interface molecular processes. One such process is the oscillatory kinetic catalysis. Oscillatory kinetic catalysis can be explained by different crystal surfaces favoring unmodified faces and reconstruction to reduce surface strain. The presence of CO can cause the reversal of surface reconstruction past a certain percent coverage. Once the reversal occurs, oxygen can be chemisorbed on the reverted surfaces. This produces a adsorption pattern with areas of surface coverage rich in CO and others O2.[12]

The driving force of catalysis is determined by the difference between the unprimed equilibrium and the instantaneous interfacial free energies.[2]