In Chemistry, a metal–ligand multiple bond describes the interaction of certain ligands with a metal with a bond order greater than one.[1] Coordination complexes featuring multiply bonded ligands are of both scholarly and practical interest. Transition metal carbene complexes catalyze the olefin metathesis reaction. Metal oxo intermediates are pervasive in oxidation catalysis. oxygen evolving complex. 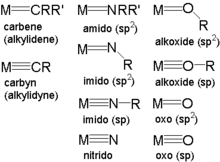 As a cautionary note, the classification of a metal ligand bond as being "multiple" bond order is ambiguous and even arbitrary because bond order is a formalism. Furthermore, the usage of multiple bonding is not uniform. Symmetry arguments suggest that most ligands engage metals via multiple bonds. The term 'metal ligand multiple bond" is often reserved for ligands of the type CRn and NRn (n = 0, 1, 2) and ORn (n = 0, 1) where R is H or an organic substituent, or pseudohalide. Historically, CO and NO+ are not included in this classification, nor are halides.

In coordination chemistry, a pi-donor ligand is a kind of ligand endowed with filled non-bonding orbitals that overlap with metal-based orbitals. Their interaction is complementary to the behavior of pi-acceptor ligands. The existence of terminal oxo ligands for the early transition metals is one consequence of this kind of bonding. Classic pi-donor ligands are oxide (O2-), nitride (N3-), imide (RN2-), alkoxide (RO-), amide (R2N-), and fluoride. For late transition metals, strong pi-donors form anti-bonding interactions with the filled d-levels, with consequences for spin state, redox potentials, and ligand exchange rates. Pi-donor ligands are low in the spectrochemical series.[1]

Metals bound to so-called triply bonded carbyne, imide , nitride (nitrido), and oxide (oxo) ligands are generally assigned to high oxidation states with low d electron counts. The high oxidation state stabilizes the highly reduced ligands. The low d electron count allow for many bonds between ligands and the metal center. A d0 metal center can accommodate up to 9 bonds without violating the 18 electron rule, whereas a d6 species can only accommodate 6 bonds.

A ligand described in ionic terms can bond to a metal through however many lone pairs it has available. For example many alkoxides use one of their three lone pairs to make a single bond to a metal center. In this situation the oxygen is sp3 hybridized according to valence bond theory. Increasing the bond order to two by involving another lone pair changes the hybridization at the oxygen to an sp2 center with an expected expansion in the M-O-R bond angle and contraction in the M-O bond length. If all three lone pairs are included for a bond order of three than the M-O bond distance contracts further and since the oxygen is a sp center the M-O-R bond angle is 180˚ or linear. Similarly with the imidos are commonly referred to as either bent (sp2) or linear (sp). Even the oxo can be sp2 or sp hybridized. The triply bonded oxo, similar to carbon monoxide, is partially positive at the oxygen atom and unreactive towards bronsted acids at the oxygen atom. When such a complex is reduced, the triple bond can be converted to a double bond at which point the oxygen no longer bears a partial positive charge and is reactive towards acid.

Imido ligands, also known as imides or nitrenes, most commonly form "linear six electron bonds" with metal centers. Bent imidos are a rarity limited by complexes electron count, orbital bonding availability, or some similar phenomenon. It is common to draw only two lines of bonding for all imidos, including the most common linear imidos with a six electron bonding interaction to the metal center. Similarly amido complexes are usually drawn with a single line even though most amido bonds involve four electrons. Alkoxides are generally drawn with a single bond although both two and four electron bonds are common. Oxo can be drawn with two lines regardless of whether four electrons or six are involved in the bond, although it is not uncommon to see six electron oxo bonds represented with three lines.