Colin Murray Cowherd[1] (born January 6, 1964) is an American sports radio personality. He is currently the host of The Herd with Colin Cowherd on ESPN Radio and ESPNews. He is also the co-host of the television show SportsNation on ESPN2.[2]

Cowherd grew up in Grayland, Washington and attended Eastern Washington University.[3] He began his career as the play-by-play voice for the Pacific Coast League's Las Vegas Stars. He eventually became a sports director at KVBC-TV in Las Vegas, Nevada, where he was named Nevada's Sportscaster of the Year five times.[4] He also served as sports anchor at WTVT-TV in Tampa, Florida. He moved to Portland, Oregon, in 1996, where he spent nearly two years at KGW Northwest NewsChannel 8, working as a sports anchor and hosting the thirty-minute 'A guy's take on baseball' program. In 2001, The Herd moved from an afternoon time slot on all-sports radio KFXX to the morning drive time.[5]. 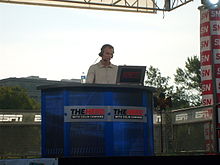 Colin Cowherd during a live broadcast of his radio program on the campus of The University of Iowa in 2010.

His show, The Herd with Colin Cowherd is a syndicated talk radio show broadcast on ESPN Radio affiliates throughout the United States and online at ESPNRadio.com. In 2008, the Herd added a simulcast on ESPNU. The show features commentary on sports news, perspective on other news stories, and interviews with popular analysts and sports figures. Although a sports broadcast, he often reflects on personal life and business as it relates to the sports world. Demographics and regional preferences are frequent topics of his program. The majority of his conversations primarily center around the National Football League (NFL) and college football with mentions of recent topics from Major League Baseball (MLB) and the National Basketball Association (NBA). He also has a featured segment, Spanning the Globe, during the second segment of his show. In this segment, he interviews reporters in different parts of the country to talk about the day's main topics in their region.

Cowherd, along with Michelle Beadle, co-hosts SportsNation; the show debuted on July 6, 2009, on ESPN2. This show is designed to take "the pulse" of the nation. Cowherd and Beadle are given two choices to select from and they attempt to determine which choice is the audience's favorite (e.g. Who's the better basketball player: LeBron James or Kobe Bryant?). On the show, he refers to soccer as "The Beautiful Game".