Message to the Grass Roots

Message to the Grass Roots 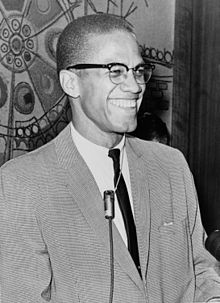 "Message to the Grass Roots" is the name of a public speech by Malcolm X at the Northern Negro Grass Roots Leadership Conference on November 10, 1963, in King Solomon Baptist Church in Detroit, Michigan.[1] In the speech, Malcolm X described the difference between the "Black revolution" and the "Negro revolution", he contrasted the "house Negro" and the "field Negro" during slavery and in the modern age, and he criticized the 1963 March on Washington. "Message to the Grass Roots" was ranked 91st in the top 100 American speeches of the 20th century by 137 leading scholars of American public address.[2]

Malcolm X began his speech by emphasizing the common experience of all African Americans, regardless of their religious or political beliefs:

By contrast, Malcolm X said, advocates of the Negro revolution in the United States think they can have a nonviolent revolution:

The house Negro and the field Negro

Malcolm X spoke about two types of enslaved Africans: the "house Negro" and the "field Negro". The house Negro lived in his owner's house, dressed well, and ate well. He loved his owner as much as the owner loved himself, and he identified with his owner. If the owner got sick, the house Negro would ask, "Are we sick?" If somebody suggested to the house Negro that he escape slavery, he would refuse to go, asking where he could possibly have a better life than the one he had.[8]

The March on Washington

Finally, Malcolm X spoke about the March on Washington, which had taken place on August 28, 1963. He said the impetus behind the march was the masses of African Americans, who were angry and threatening to march on the White House and the Capitol. Malcolm X said there were threats to disrupt traffic on the streets of Washington and at its airport. He described it as the Black revolution.[11]

Malcolm X said that President Kennedy called the Big Six civil rights leaders and told them to stop the march, but they told him they couldn't. "Boss, I can't stop it, because I didn't start it." "I'm not even in it, much less the head of it." According to Malcolm X, Kennedy arranged for the civil rights leaders to take over the march by arranging donors and a public relations firm for them. As a result, the March on Washington lost its militancy and became "a circus".[12]

"Message to the Grass Roots" was one of Malcolm X's last speeches as a member of the Nation of Islam. A few weeks after delivering the speech, Elijah Muhammad, the Nation's leader, silenced Malcolm X for comments he made with respect to the assassination of President Kennedy.[1] On March 8, 1964, Malcolm X announced his departure from the Nation of Islam.[14]

In some ways, "Message to the Grass Roots" can be viewed as a sign of Malcolm X's impending separation from the Nation of Islam. In it, he spoke not as a Muslim minister but as a leader of the Black masses. Gloria Richardson, who was present, later remembered: "That was when I really wondered how long it would be before he broke with [the Nation of Islam]."[15]

"Message to the Grass Roots" was the most "political" speech Malcolm X had delivered to that time. The political message of the speech was beyond the teachings of the Nation of Islam.[15]

Some of the themes touched on by Malcolm X in "Message to the Grass Roots" were familiar ones. The distinction between the Black revolution and the Negro revolution, and that between the house Negro and the field Negro, had become common features of his speeches.[16][17]

Theologian James Cone suggests that Malcolm X's critique of the March on Washington, while not accurate in the details, was true in general. According to Cone, the march was controlled by the Black bourgeoisie and the white liberals who financed it. The whites forced John Lewis to rewrite his speech because it was considered offensive to the Kennedy administration, and James Baldwin wasn't allowed to speak out of fear for what he might say.[18]

In 2008, shortly after the election of Barack Obama, the first African-American president, al-Qaeda released a videotape that included a statement by Ayman al-Zawahiri, who called Obama a "house Negro" and contrasted him with "honorable Black Americans" such as Malcolm X.[19]