Gray's beaked whale (Mesoplodon grayi), sometimes known as Haast's beaked whale, the Scamperdown whale, or the southern beaked whale, is one of the better-known members of the genus Mesoplodon. The scientific name refers to John Edward Gray, a zoologist at the British Museum. This species is fairly gregarious and strands relatively frequently for a beaked whale. It is notable for being the only beaked whale, other than Shepherd's beaked whale (not a Mesoplodon), that has numerous teeth.

The species was first described in 1876 by Julius von Haast, director of the Canterbury Museum, Christchurch, New Zealand. He named it after the British taxonomist John Edward Gray. His description was based on three skulls he had received in May 1875 from a William Hood, Esq., who had retrieved them from three specimens that were part of a group of 28 individuals that had stranded on Waitangi Beach, Chatham Island, in the summer of 1874-75.[2]

Gray's beaked whale is a fairly slender member of the genus. The melon on the whale bulges towards the blowhole and slopes down towards the beak. The beak itself is very long and pointed for a beaked whale, and has a relatively straight mouth line. In both sexes there are 17–22 rows of small teeth located towards the back of the mouth, which barely protrude past the gum. In males, there are two small, triangular teeth present halfway down the mouth. The overall coloration is dark on top and light below, and both sexes have a white beak. Females are lighter on top and have additional white marking near the genitals. Adult males often carry linear scars that probably result from fighting, and both males and females may display circular scars from cookiecutter shark bites.[3] Females reach at least 5.3 meters (17 feet 6 inches) whereas males reach 5.7 meters (19 feet) and weigh around 1100 kilograms (2400 pounds). They are believed to be around 2.4 meters (7 feet 10 inches) long when born. 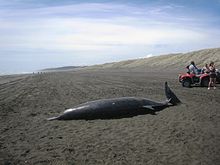 The Gray's beaked whale is very gregarious. It has a tendency to strand in large groups, once involving 28 individuals. Other strandings involved five to eight animals. The upper teeth may be used in holding prey, but it is not clear why only this species has them.

This species typically lives in the Southern Hemisphere between 30 and 45 degrees. Many strandings have occurred off New Zealand, but others have happened off Australia, South Africa, South America, and the Falkland Islands. This species has been sighted in groups off the coast of Madagascar and in the Antarctic area. Oddly, one specimen stranded off the Netherlands, in a different hemisphere and several thousand miles away from all other strandings. No population estimates exist, but they are believed to be rather common.