Manuae (Cook Islands)
For the island with the same name in French Polynesia, see Manuae (Society Islands) and Manuae (disambiguation).

Manuae is a true atoll sitting on the peak of a submerged volcano which descends 4000 meters to the ocean bed. It comprises two horseshoe-shaped islets, Manuae to the west and Te Au O Tu to the east, with a total area of 6.17 km²[1]on either side of a lagoon about 7 km x 4 km. Manuae has an area of 2.1 km², and Te Au O TU of 3.9 km².[2] The lagoon is 13 km² in size, shallow and subject to large shifting sand banks.[3] A coral reef surrounds the atoll and there is no passage through the reef.[4] 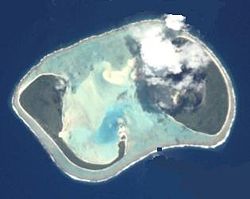 An aerial view of Manuae 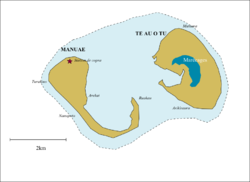 The island is a marine park and is an important breeding ground for seabirds and marine turtles in the Central Pacific. The offshore waters of Manuae are good fishing grounds.

Captain James Cook sighted Manuae on 23 September 1773, the first of the Cook Islands he voyaged to. Initially he named it Sandwich Island but changed it to Hervey Island in honor of Augustus Hervey, 3rd Earl of Bristol, then a Lord of the Admiralty when he decided instead give the name of "Sandwich Islands" to the Hawaiian Islands. This name was later corrupted to Hervey's Island, or Hervey's Isle, and later applied to the entire southern group, as the Hervey Islands. This name remained popular until 1824 when the islands were renamed the Cook Islands by the Russian cartographer von Krusenstern, in honor of Capt. Cook who had died in 1779.

Norwegian author Erlend Loe writes humorously about an expedition to Manuae in his 1999 novel "L".

The island once supported a small copra industry with a settlement established next to the small reef passage less than one kilometer northeast of Turakino, the westernmost point of the atoll. The passage, at the sea entrance, is less than 4 metres wide and in a swell is exceedingly dangerous without local knowledge.

The island has an airfield (dirt airstrip barely visible) that has been out of use for several years. Fishermen from Aitutaki occasionally organise trips to Manuae. All regulations applicable to Aitutaki, apply to Manuae as well.[3]

The population peaked with 32 at the 1956 census, but twenty years later the island was abandoned: