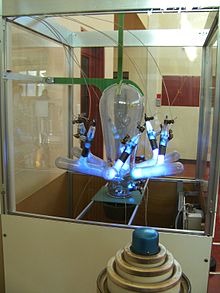 Mercury rectifier on display in Beromünster, Switzerland before being decommissioned

A mercury-arc valve (mercury-vapor rectifier) is a type of electrical rectifier used for converting high-voltage or high-current alternating current (AC) into direct current (DC). Rectifiers of this type were used to provide power for industrial motors, electric railways, streetcars, and electric locomotives, as well as for high-voltage direct current power transmission. They were the primary method of rectification before the advent of semiconductor rectifiers such as diodes and gate turn-off thyristors (GTOs). 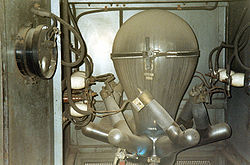 The mercury arc rectifier was invented by Peter Cooper Hewitt in 1902 and further developed throughout the 1920s and 1930s by researchers in both Europe and North America. Before the advent of solid-state devices, mercury-arc rectifiers were one of the most efficient rectifiers. Mercury-arc rectifiers or "converters" were used for charging storage batteries and in arc lighting systems where they were found to be more efficient than rotary converters.[1]

Mercury-arc valves were widely used until the 1960s for the conversion of alternating current into direct current for large industrial uses. Applications included power supply for streetcars, electric railways, and variable-voltage power supplies for large radio transmitters. Mercury-arc stations were used to provide DC power to legacy Edison-style DC power grids in urban centers until the 1950s. In the 1960s, however, solid-state silicon devices, first diodes and then thyristors, replaced all lower-power and lower voltage rectifier applications of mercury arc tubes.

They remain in use in some South African mines, on the Manx Electric Railway on the Isle of Man, the Inter-Island HVDC (high voltage direct current) link between the North and South Islands of New Zealand, and the HVDC Vancouver Island link between Vancouver Island and the Canadian mainland. Both of the last are currently scheduled to be replaced: in New Zealand by a new thyristor pole (to continue HVDC service underwater) and in Canada (over a slightly shorter underwater distance), by a three-phase AC link. 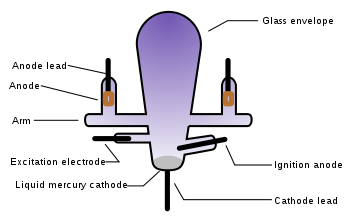 One type of mercury vapor electric rectifier consists of an evacuated glass bulb with a pool of liquid mercury sitting in the bottom as the cathode.[2] Over it curves the glass bulb, which condenses the mercury that is evaporated as the device operates. The glass envelope has one or more arms with graphite rods as anodes. Their number depends on the application. If direct current is to be produced from single-phase alternating current, then two anodes are used, each connected to the outer ends of a centre-tapped transformer secondary winding. With three-phase alternating current three or six anodes are used to provide a smoother direct current. Six-phase operation can improve the efficiency of the transformer as well as providing smoother DC current by enabling two anodes to conduct simultaneously. During operation, the arc transfers to the anodes at the highest positive potential (with respect to the cathode). Design of the arms and envelope is intended to prevent an arc from forming between the anodes; such a condition is called "backfire" and is a critical factor in the design of mercury-arc rectifiers.

Glass envelope rectifiers can produce hundreds of kilowatts of direct-current power in a single unit. A 6-phase rectifier rated 150 amperes has a glass envelope approximately 600 mm (24 inches) high by 300 mm (12 inches) outside diameter. These rectifiers will contain several pounds of liquid mercury. The large size of the envelope is required due to the low thermal conductivity of glass. Mercury vapor in the upper part of the envelope must dissipate heat through the glass envelope in order to condense and return to the cathode pool.

The current-carrying capacity of a rectifier is limited in part by the size of the wires fused into the glass envelope for connection of the anodes and cathode. Development of high-current rectifiers required leadwire materials and glass with very similar coefficients of thermal expansion in order to prevent leakage of air into the envelope.

For larger valves, a metal tank with ceramic insulators for the electrodes is used, with a vacuum pump system to counteract slight leakage of air into the tank around imperfect seals. The design patented by Uno Lamm of ASEA is one example of this type which includes grading electrodes between the anode and cathode to prevent backfire. Metal-tank rectifiers were built with ratings of 2000 A and 125 kV per unit.

Both glass and metal envelope rectifiers may have control grids inserted between the anode and cathode. This allows the conduction of the rectifier to be controlled, for example to delay the instant at which the arc transfers to the anode on the alternating current waveform, thereby giving control of the mean output voltage produced by the rectifier. Such grid-controlled valves are an essential part of a static inverter.

The temperature of the envelope must be carefully controlled, since the working pressure within the envelope is set by the coolest spot on the enclosure wall. A typical design maintains temperature at 40 degrees Celsius and a mercury vapor pressure of 7 millipascals.

Operation of the rectifier relies on an electrical arc discharge between electrodes in a sealed envelope containing mercury vapor. A pool of liquid mercury acts as a self-renewing cathode that does not deteriorate with time. The mercury emits electrons freely, whereas the carbon anodes emit very few electrons even when heated, thus rectifying action occurs.

Once an arc is formed, electrons are emitted from the surface of the pool, causing ionization of mercury vapor along the path towards the anodes. The mercury ions are attracted towards the cathode, and the resulting ionic bombardment of the pool maintains the temperature of the 'emission spot', so long as a current of a few amperes continues.

The mercury ions emit light at characteristic wavelengths, the relative intensities of which are determined by the pressure of the vapor. At the low pressure within a rectifier, the light appears pale blue-violet and contains much ultraviolet light.

The cathode is connected to the DC load, which in turn is connected to the center tap of an AC transformer, which always remains at zero potential. For each AC phase, a wire from each of the two end taps is connected to an anode "arm" on the mercury-arc rectifier. As the voltage on each anode goes positive, it will begin to conduct through the mercury vapor to the cathode. As the anodes of each AC phase are fed from opposite ends of the transformer winding, one will be positive, and the other negative, and thus a current will always be maintained from one or more positive anodes to the cathode.

Single-phase mercury-arc rectifiers were infrequently used because every time the AC voltage dropped to zero the arc would be extinguished. The direct current produced by a single-phase rectifier contains a varying component (ripple) at twice the power supply frequency, which was undesirable in many applications for DC. The solution was to use 2, 3 or even 6 phase AC power supplies so that the rectified current would maintain a more constant voltage level. Polyphase rectifiers also balanced the load on the phases of a polyphase supply system, which is desirable for reasons of system performance and economy.

Since momentary interruptions or reductions of output current may cause the cathode spot to extinguish, many rectifiers incorporate an additional electrode to maintain an arc whenever the plant is in use. Typically, a two or three phase supply of a few amperes passes through small 'excitation' anodes. A magnetically shunted transformer of a few hundred VA rating is commonly used to provide this supply.

This excitation or keep-alive circuit was absolutely necessary for mercury-arc rectifiers used in the high-voltage supply of radiotelegraphy transmitters, as current flow was regularly interrupted every time the morse key was released.[3]

Installation of a control grid between the anode and the pool cathode allows control of the conduction of the valve. Start of the current flow can be delayed past the point at which the arc would form in an uncontrolled valve. This allows the output voltage of a valve group to be adjusted by delaying the firing point, and allows controlled mercury-arc valves to form the active switching elements in an inverter converting direct current into alternating current. 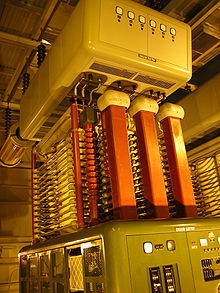 The largest ever mercury-arc rectifiers were used until 2004 at the Nelson River Bipole high-voltage DC-power-transmission project.

In 1919 the book "Cyclopedia of Telephony & Telegraphy Vol. 1"[4] described an amplifier for telephone signals that used a magnetic field to modulate an arc in a mercury rectifier tube. This was never commercially important.

Mercury compounds are toxic, highly persistent in the environment, and present a danger to humans and the environment. The use of large quantities of mercury in fragile glass envelopes presents a hazard of potential release of mercury to the environment should the glass bulb be broken. Some HVDC static inverter stations have required expensive clean-up to eliminate traces of mercury emitted from the station over its service life. Steel tank rectifiers frequently required vacuum pumps which continually emitted small amounts of mercury vapor.