Canada at the 2010 Winter Olympics

Canada at the 2010 Winter Olympics 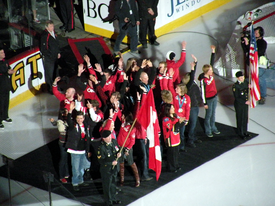 Several of Canada's medallists are honoured prior to a National Hockey League game in Calgary.

Canada hosted and participated in the 2010 Winter Olympics in Vancouver, British Columbia. Canada previously hosted the 1976 Summer Olympics in Montreal and the 1988 Winter Olympics in Calgary. Canada sent a team of 206 athletes (116 men, 90 women), including participants in all 15 sports. The Canadian Olympic Committee (COC) had originally set a goal of winning the most medals at the Olympics, which they estimated would mean winning between 28 and 34. This goal was withdrawn by the COC on February 22.[3] Canada, with 26 medals, surpassed their previous best medal performance in 2006, where athletes won 24 medals (including seven gold), the most medals the nation has ever won at a non-boycotted Olympics (Summer or Winter).[4]

After failing to top the podium in Montréal and Calgary, Canada won its first gold medal on home soil in Vancouver, and broke several Olympic medal records.[5] On February 14, freestyle skier Alexandre Bilodeau became the first Canadian to win a gold medal at home, doing so in mogul skiing.[6] On February 27, Canada made history by winning the most gold medals of any host country at a Winter Olympics, surpassing the previous record of 10 set by Norway in 1994 and the United States in 2002,[5] and were the first host nation to win the gold medal count at a Winter Olympics since Norway at the 1952 Winter Olympics.[5] Canada finished the 2010 Olympics with the record for most gold medals at a single Winter Olympics, with 14, one more than the previous record of 13 set by the former Soviet Union in 1976 and Norway in 2002.[5]

In 2010, Brian McKeever became the first Canadian athlete to be named to both Paralympic and Olympic teams, although he did not compete in the Olympic Games.[7][8]

Led by flagbearer Clara Hughes, the Canadian team enters BC Place during the opening ceremonies.

In May 2009, a motion for the Canadian Olympic team to wear seal skin on their uniforms was unopposed in Canadian parliament.[9] The motion read: "That, in the opinion of the House, the government should take advantage of the opportunity provided by the 2010 Vancouver Olympic Games to promote seal products, particularly by studying the possibility of using these products in the making of the Canadian Olympic clothing."[10] The motion was proposed by Raynald Blais of the Bloc Québécois in protest of the European Parliament's passing of a bill to ban the import of seal products.[9] Canadian Olympic Committee chief executive officer Chris Rudge quickly dismissed the idea, saying "It would be inappropriate for us and I think it would be inappropriate to use the athletes as a voice for issues that accrue to other elements to our society."[11]

Own the Podium program

Main article: Own the Podium

After Canadians failed to obtain a gold medal in 1976 or 1988, the Canadian Olympic Committee pledged to make Canada the top medal winning nation at 2010. They started the Own the Podium program and the Canadian government invested $120 million into the program.[12]

Since 1994, Canadian national ice hockey team players have worn uniforms that feature the logo of Hockey Canada, the governing body of the sport in Canada.[13] The International Olympic Committee (IOC) does not allow the use of national federation logos, but did not strictly enforce the rule until the 2008 Summer Olympics. Canadian ice hockey teams used the Hockey Canada logo at the 1998, 2002 and 2006 Winter Olympics, because the IOC does allow an exemption if the nation's National Olympic Committee approves.[14] The Canadian Olympic Committee (COC) chose not to support an exemption. Chris Rudge, the COCs chief executive officer, said "[Hockey Canada] is discontent is that we're not going the extra mile to go for an exemption for [them] ... but it's not our fight, it's the IOC's rule, and Hockey Canada knew this was coming. [...] We got directives on the summer uniforms two years ago, and we shared it then with the winter sports. We told them we didn't have the directives for winter sports at that time, but they had to know it was coming. … We let them know it would be a harder issue than before."[15] Hockey Canada executives, concerned that they would lose money through apparel sales, unsuccessfully protested the decision.[16] Bob Nicholson, president of Hockey Canada, said "The COC is supposed to lead Canada into the Olympics and hopefully this isn't the way the COC is going to lead us over the next 13 months. [...] I just wish they would support us at the IOC level and they did not do that and I don't like that type of teammate."[17] A new design was unveiled on August 17, 2009. According to Nicholson, the new jersey will only be used in the 2010 tournament, and players will use the old version at other international tournaments.[18] 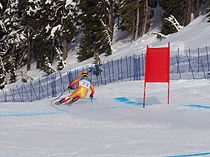 The Canadian alpine skiing team is guaranteed 14 athletes, which is down from the original 22 (the maximum number a NOC may enter).[19] The International Ski Federation (FIS) announced that the number of overall alpine skiers would be limited to 320, and that some of the guaranteed spots would go to smaller nations, so that there will be a more international field. Canada was originally guaranteed 14 skiers, although the number was later raised to 18, and can still enter a full team of 22 if other athletes meet the qualification standards. Gary Allan, president of Alpine Canada, feels that Canada should be allowed 22, arguing that television coverage and crowd reception will be better.[20] Canada was allowed a team of 19 skiers, which was announced on January 27, 2010.[21] That number was later increased to 22 when other nations were unable to fill their quotas.[22]

Prior to the announcement of the team, several athletes thought to be medal contenders were injured severely enough to keep them out of the Olympics, including 2009 Alpine World downhill champion John Kucera, Kelly VanderBeek, François Bourque and Jean-Philippe Roy.[23] 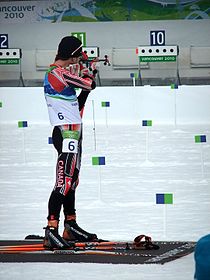 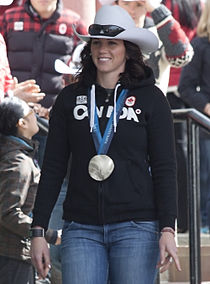 Helen Upperton displays the silver medal she won in the two-woman competition.

The 11 athlete team was announced on January 22, 2010. The team consisted of Ivan Babikov, George Grey, Alex Harvey, Devon Kershaw, Stefan Kuhn, Brian McKeever, 2006 gold medalist Chandra Crawford, Daria Gaiazova, Perianne Jones, 2006 silver medalist Sara Renner and Madeleine Williams.[27] Brian McKeever, who is legally blind, competed at the 2002 and 2006 Winter Paralympics in both cross-country skiing and biathlon. He won four gold medals (two at each Games) in cross-country skiing as well as a silver and a bronze in biathlon. He would have been the first athlete in Olympic history ever to compete in the Winter Olympics after participating in the Paralympics.[27] Four more cross-country skiers were announced on January 27, 2010: Drew Goldsack, Brent McMurtry, Gordon Jewett and Brittany Webster.[28] 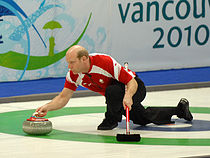 Kevin Martin throws a stone during a curling match.

Canada qualified both a men's and women's team. The representatives were decided at the 2009 Canadian Olympic Curling Trials, held December 6–13, 2009, in Edmonton.[30] Brad Gushue and his team, the gold medalists in the men's tournament in 2006, were unable to qualify for the trials, and did not get the chance to defend their gold medal.[31] In the men's tournament, Canada was represented by the team of Kevin Martin, John Morris, Marc Kennedy and Ben Hebert. This was the second Olympic tournament for Martin, who won a silver medal at the 2002 Winter Olympics.[32] In the women's tournament, the team of Cheryl Bernard, Susan O'Connor, Carolyn Darbyshire and Cori Bartel participated.[33] 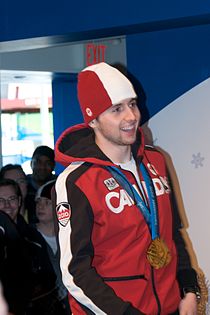 Alexandre Bilodeau displays the gold medal he won in the moguls competition.

The full 18 athlete freestyle skiing team was announced on January 24, 2010.[34] Dave Duncan was originally named to the men's ski cross team, but he broke his collarbone during a training run at the Olympics and was unable to compete. Brady Leman was named his replacement.[35] However, Leman aggravated a broken tibia he suffered in 2009, and also did not compete. Replacing both of them was Davey Barr.[36] 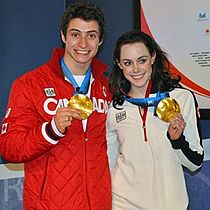 Canada qualified two athletes or pairs in each of the four events for a total of 12 athletes.[37][38] Participants were decided at the 2010 Canadian Figure Skating Championships.

National teams are co-ordinated by Hockey Canada and players are chosen by the team's management staff.[42] The men's and women's national teams both qualified for the 2010 Winter Olympics.[43]

With Vancouver being home to the Canucks, the 2010 Winter Olympics were the first to take place in an NHL market since the league started allowing its players to compete in the games in 1998 in Nagano, Japan.

A group of about 45 players were invited to an orientation camp in August 2009 (although players not invited could also have been named to the team) and the final 23 man roster was announced on December 30, 2009.[44][45] The team was coached by Mike Babcock and included assistant coaches Ken Hitchcock, Lindy Ruff and Jacques Lemaire.[46]

The following is the Canadian roster in the men's ice hockey tournament of the 2010 Winter Olympics.[47]

Canada played in Group A.

In March 2009, the national team staff named 22 players to the 2009 World Championship team, as well as four additional players who would not compete in 2009 but could potentially be included in the Olympic roster.[48] The final roster of 21 players was announced on 21 December 2009. Brianne Jenner, Jocelyne Larocque,[49] Delaney Collins, Jennifer Wakefield and Gillian Ferrari were included in the centralized roster, but were cut before the Olympics.[50] The team, which includes 14 Olympic veterans and seven players making their Olympic debut, is coached by Melody Davidson.[51]

The following is the Canadian roster in the women's ice hockey tournament of the 2010 Winter Olympics.[52]

Canada will play in Group A.

Canada's Olympic luge team, announced on December 19, 2009, in Whistler, British Columbia, consisted of ten athletes: six individual competitors and two teams for the doubles event. The women's team consisted of Alex Gough, Regan Lauscher and Meaghan Simister. The men's singles team will comprise Sam Edney, Jeff Christie and Ian Cockerline. For the men's doubles event, two teams participated: Chris & Mike Moffat; and Tristan Walker & Justin Snith.[53] The Fast Track Group, the title sponsor of the team, announced that they would give $1 million (which would be split between the athlete and Canadian Luge Federation) to any athlete that won a gold medal. The company also offered $50,000 for a silver and $5,000 for a bronze.[54]

Canada sent a single athlete, Jason Myslicki, to compete in the Nordic combined.[55]

Note: 'Deficit' refers to the amount of time behind the leader a competitor began the cross-country portion of the event. Italicized numbers show the final deficit from the winner's finishing time.

As the host nation, Canada can send a full team of five men and five women for short track speed skating.[56] Charles Hamelin finished third overall at the 2009 World Short Track Speed Skating Championships and was guaranteed a spot in the 2010 team by Speed Skating Canada.[57] At the Canadian short-track speedskating trials, Jessica Gregg, Marianne St-Gelais, Kalyna Roberge and Tania Vicent[58] earned spots on the women's team and Olivier Jean and Guillaume Bastille earned spots on the men's team with their performances.[59] Valérie Maltais and François Hamelin were added to the women's and men's teams respectively as discretionary picks by the coaches.[60] François-Louis Tremblay was unable to participate in the trials due to an ankle injury, but was given a bye and was named to the team. The number of skaters that will participate in each event will be determined by the team's performances at the first three World Cup events for the 2009/2010 season.[60] 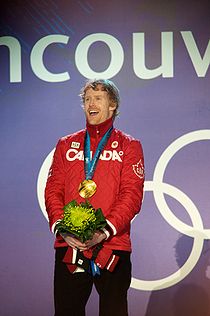 Jasey-Jay Anderson secured an Olympic berth in the Parallel Giant Slalom by winning the event at the 2009 FIS Snowboarding World Championships.[62] The full 18 athlete team was announced on January 25, 2010.[63]

Key: '+ Time' represents a deficit; the brackets indicate the results of each run.

Clara Hughes after winning the bronze medal in the 500 metres.

Canada's speed skating team consisted of eight men and eight women.[64] Canadian speed skaters participated in every event, with the exception of the men's 10,000 m. The team was named on January 11, 2010.[65]