A shape-memory alloy (SMA, smart metal, memory metal, memory alloy, muscle wire, smart alloy) is an alloy that "remembers" its original, cold-forged shape: returning the pre-deformed shape by heating. This material is a lightweight, solid-state alternative to conventional actuators such as hydraulic, pneumatic, and motor-based systems. Shape-memory alloys have applications in industries including medical and aerospace.

The three main types of shape-memory alloys are the copper-zinc-aluminium-nickel, copper-aluminium-nickel, and nickel-titanium (NiTi) alloys but SMAs can also be created by alloying zinc, copper, gold and iron. NiTi alloys are generally more expensive and change from austenite to martensite upon cooling; Mf is the temperature at which the transition to martensite completes upon cooling. Accordingly, during heating As and Af are the temperatures at which the transformation from martensite to austenite starts and finishes. Repeated use of the shape-memory effect may lead to a shift of the characteristic transformation temperatures (this effect is known as functional fatigue, as it is closely related with a change of microstructural and functional properties of the material).[1]

The transition from the martensite phase to the austenite phase is only dependent on temperature and stress, not time, as most phase changes are, as there is no diffusion involved. Similarly, the austenite structure receives its name from steel alloys of a similar structure. It is the reversible diffusionless transition between these two phases that results in special properties. While martensite can be formed from austenite by rapidly cooling carbon-steel, this process is not reversible, so steel does not have shape-memory properties.

In this figure, ξ(T) represents the martensite fraction. The difference between the heating transition and the cooling transition gives rise to hysteresis where some of the mechanical energy is lost in the process. The shape of the curve depends on the material properties of the shape-memory alloy, such as the alloying.[2] and work hardening.[3]

Shape-memory alloys have different shape-memory effects. Two common effects are one-way and two-way shape memory. A schematic of the effects is shown below. 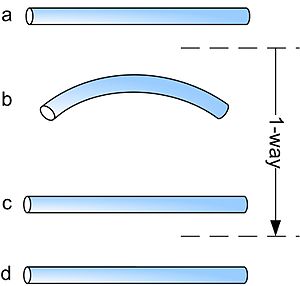 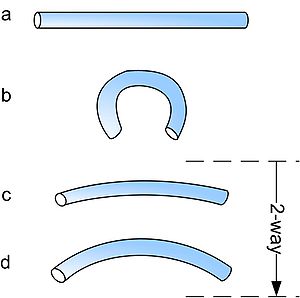 The procedures are very similar: starting from martensite (a), adding a reversible deformation for the one-way effect or severe deformation with an irreversible amount for the two-way (b), heating the sample (c) and cooling it again (d).

When a shape-memory alloy is in its cold state (below As), the metal can be bent or stretched and will hold those shapes until heated above the transition temperature. Upon heating, the shape changes to its original. When the metal cools again it will remain in the hot shape, until deformed again.

With the one-way effect, cooling from high temperatures does not cause a macroscopic shape change. A deformation is necessary to create the low-temperature shape. On heating, transformation starts at As and is completed at Af (typically 2 to 20 °C or hotter, depending on the alloy or the loading conditions). As is determined by the alloy type and composition and can vary between −150 °C and 200 °C.

One of the commercial uses of shape-memory alloy exploits the pseudo-elastic properties of the metal during the high-temperature (austenitic) phase. The frames of reading glasses have been made of shape-memory alloy as they can undergo large deformations in their high-temperature state and then instantly revert back to their original shape when the stress is removed. This is the result of pseudoelasticity; the martensitic phase is generated by stressing the metal in the austenitic state and this martensite phase is capable of large strains. With the removal of the load, the martensite transforms back into the austenite phase and resumes its original shape.

This allows the metal to be bent, twisted and pulled, before reforming its shape when released. This means the frames of shape-memory alloy glasses are claimed to be "nearly indestructible" because it appears no amount of bending results in permanent plastic deformation.

The first reported steps towards the discovery of the shape-memory effect were taken in the 1930s. According to Otsuka and Wayman, A. Ölander discovered the pseudoelastic behavior of the Au-Cd alloy in 1932. Greninger and Mooradian (1938) observed the formation and disappearance of a martensitic phase by decreasing and increasing the temperature of a Cu-Zn alloy. The basic phenomenon of the memory effect governed by the thermoelastic behavior of the martensite phase was widely reported a decade later by Kurdjumov and Khandros (1949) and also by Chang and Read (1951).[1]

The nickel-titanium alloys were first developed in 1962–1963 by the United States Naval Ordnance Laboratory and commercialized under the trade name Nitinol (an acronym for Nickel Titanium Naval Ordnance Laboratories). Their remarkable properties were discovered by accident. A sample that was bent out of shape many times was presented at a laboratory management meeting. One of the associate technical directors, Dr. David S. Muzzey, decided to see what would happen if the sample was subjected to heat and held his pipe lighter underneath it. To everyone's amazement the sample stretched back to its original shape.[5][6]

There is another type of SMA, called a ferromagnetic shape-memory alloy (FSMA), that changes shape under strong magnetic fields. These materials are of particular interest as the magnetic response tends to be faster and more efficient than temperature-induced responses.

Metal alloys are not the only thermally-responsive materials; shape-memory polymers have also been developed, and became commercially available in the late 1990s.

Many metals have several different crystal structures at the same composition, but most metals do not show this shape-memory effect. The special property that allows shape-memory alloys to revert to their original shape after heating is that their crystal transformation is fully reversible. In most crystal transformations, the atoms in the structure will travel through the metal by diffusion, changing the composition locally, even though the metal as a whole is made of the same atoms. A reversible transformation does not involve this diffusion of atoms, instead all the atoms shift at the same time to form a new structure, much in the way a parallelogram can be made out of a square by pushing on two opposing sides. At different temperatures, different structures are preferred and when the structure is cooled through the transition temperature, the martensitic structure forms from the austenitic phase.

Shape-memory alloys are typically made by casting, using vacuum arc melting or induction melting. These are specialist techniques used to keep impurities in the alloy to a minimum and ensure the metals are well mixed. The ingot is then hot rolled into longer sections and then drawn to turn it into wire.

The way in which the alloys are "trained" depends on the properties wanted. The "training" dictates the shape that the alloy will remember when it is heated. This occurs by heating the alloy so that the dislocations re-order into stable positions, but not so hot that the material recrystallizes. They are heated to between 400 °C and 500 °C for 30 minutes. Typical variables for some alloys are 500 °C and for more than 5 minutes.

They are then shaped while hot and are cooled rapidly by quenching in water or by cooling with air.

The copper-based and NiTi-based shape-memory alloys are considered to be engineering materials. These compositions can be manufactured to almost any shape and size.

The yield strength of shape-memory alloys is lower than that of conventional steel, but some compositions have a higher yield strength than plastic or aluminum. The yield stress for Ni Ti can reach 500 MPa. The high cost of the metal itself and the processing requirements make it difficult and expensive to implement SMAs into a design. As a result, these materials are used in applications where the super elastic properties or the shape-memory effect can be exploited. The most common application is in actuation.

One of the advantages to using shape-memory alloys is the high level of recoverable plastic strain that can be induced. The maximum recoverable strain these materials can hold without permanent damage is up to 8% for some alloys. This compares with a maximum strain 0.5% for conventional steels.

The first high volume product (> 5Mio actuators / annual) is an automotive valve application build to run low pressure pneumatics /bladders in a car seat to adjust the contour (lumbar support / bolsters). The accounting of basical all benefits of SMA over solenoids (noise/EMC/weight/package (form factor)/power consumption) was the crucial factor to replace the standard technology by SMA. Where in other applications usually just 2 or 3 SMA benefits are considered and hinder from replacing the 'old' technologies.

The second high volume application was an AF Autofocus actuator for a smart phone. In this moment there are different companies working on an OIS (optical image stabilisation) module driven by SMA wires.

There have also been limited studies on using these materials in robotics, for example the hobbyist robot Stiquito (and "Roboterfrau Lara"[7]), as they make it possible to create very light robots. Weak points of the technology are energy inefficiency, slow response times, and large hysteresis.

Shape-memory alloys are applied in medicine, for example, as fixation devices for osteotomies in orthopaedic surgery, in dental braces to exert constant tooth-moving forces on the teeth.

The late 1980s saw the commercial introduction of Nitinol as an enabling technology in a number of minimally invasive endovascular medical applications. While more costly than stainless steel, the self expanding properties of Nitinol alloys manufactured to BTR (Body Temperature Response), have provided an attractive alternative to balloon expandable devices in stent grafts where it gives the ability to adapt to the shape of certain blood vessels when exposed to body temperature. On average, 50% of all peripheral vascular stents currently available on the worldwide market are manufactured with Nitinol.

Eyeglass frames made from titanium-containing SMAs are marketed under the trademarks Flexon and TITANflex. These frames are usually made out of shape-memory alloys that have their transition temperature set below the expected room temperature. This allows the frames to undergo large deformation under stress, yet regain their intended shape once the metal is unloaded again. The very large apparently elastic strains are due to the stress-induced martensitic effect, where the crystal structure can transform under loading, allowing the shape to change temporarily under load. This means that eyeglasses made of shape-memory alloys are more robust against being accidentally damaged.

Memory metal has been utilized in orthopedic surgery as a fixation-compression device for osteotomies, typically for lower extremity procedures. The device, usually in the form of a large staple, is stored in a refrigerator in its malleable form and is implanted into pre-drilled holes in the bone across an osteotomy. As the staple warms it returns to its non-malleable state and compresses the bony surfaces together to promote bone union.[8]

The range of applications for SMAs has grown over the years, a major area of development being dentistry. One example is the prevalence of dental braces using SMA technology to exert constant tooth-moving forces on the teeth; the nitinol archwire was developed in 1972 by orthodontist George Andreasen.[9] This revolutionized clinical orthodontics and has also had an effect on fiber optic development. Andreasen's alloy has a patterned shape memory, expanding and contracting within given temperature ranges because of its geometric programming.

Harmeet D. Walia later utilized the alloy in the manufacture of root canal files for endodontics.

Alloys of metals having the memory effect at different temperatures and at different percentages of its solid solution contents.