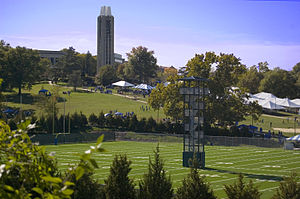 Kansas Football's new practice fields and tailgaters on the hill below the Campanile.

Memorial Stadium was built in 1920 funded by students, faculty, and fans. Originally the stadium had only east and west bleachers, which were expanded southward in 1925. The north bowl seating section was added in 1927 to give the stadium its horseshoe shape which it retains today. The west bleachers were expanded significantly upwards in 1963, with similar additions to the east side in 1965. A major renovation in 1978 repaired concrete and upgraded home and visiting team facilities.

Permanent lights were installed in 1997 and the current infrastructure is the result of a 1998 renovation. The press box and scholarship suites saw significant improvement and expansion in 1999, and the MegaVision video board was installed in the same year.

The track that rings the stadium has been resurfaced several times, most recently in 1999.

The field has been artificial turf since 1970. In the summer of 2009 the old AstroPlay surface was replaced with FieldTurf.[4]

A new scoreboard with two video strips was mounted at the top of the stadium's north bowl for the 2005 season, correcting a quirk of the stadium that north-driving teams had no way to see the clock without turning around. In 2006, the playing field was named Kivisto Field in honor of prominent donor Tom Kivisto.

On October 6, 2006 at precisely 11:27am, the University of Kansas broke ground on the new $31-million Anderson Family Football Complex and it opened in 2008. The building includes offices, academic areas, a weight room, locker rooms, an audio-visual room, meeting rooms, a cardio room, a hydro-therapy room, a nutrition area and a display area. It is also joined by new practice fields to the southeast of the stadium.[5]

On September 17, 2009, the Kansas Board of Regents approved a $34 million addition of luxury seating on the east side of the stadium. The addition, known as the Gridiron Club, will increase the stadium's capacity by 3,000 seats. However, as of 2011, construction has yet to begin.[6]

The stadium's current official capacity is 50,071, although the horseshoe shape allows tailgaters to view the game from the Campanile hill to the south. A then-record crowd of 51,574 saw the Jayhawks defeat Kansas State 25-18 in 1973.

At the Jayhawks' November 5, 2005 streak-snapping 40-15 victory over Nebraska, it was announced that that attendance record was broken, with a standing-room-only crowd of 51,750.

On November 18, 2006 a then attendance record of 51,821 fans watched the Jayhawks defeat Kansas State, 39–20. The home attendance average of 44,137 in seven games during the year set a new season record, surpassing the prior season's record of 43,675 in six contests. Over the last three seasons, stadium attendance has averaged more than 41,000 per game.[7]

On September 5, 2009 Kansas broke the record again as 52,530 fans[8] watched the Jayhawks defeat Northern Colorado in the opening game of the Jayhawks' 2009 season.

Memorial Stadium has also hosted the Kansas Relays track and field event every year since 1923, except in 1943, 1944 and 1945 due to World War II and 1998 and 1999 due to construction. The Relays annually see top area high school and intercollegiate competitors, and the open events often draw Olympic runners such as Maurice Greene and Marion Jones. The Kansas Relays is the location where world-record holder Justin Gatlin tested positive for performance enhancing drugs in 2006. Gatlin is currently serving an eight year suspension.

The following are the top 10 largest crowds in stadium history: