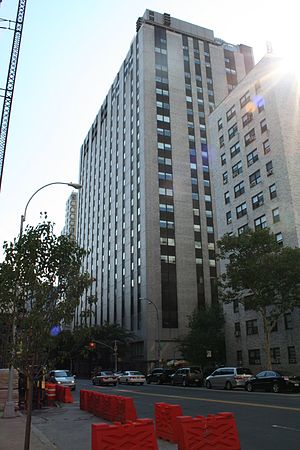 Memorial Sloan–Kettering Cancer Center (MSKCC) is a cancer treatment and research institution founded in 1884 as the New York Cancer Hospital. The main campus is located at 1275 York Avenue, between 67th and 68th Streets in New York City, with other locations in Basking Ridge, New Jersey, Long Island and Westchester County, New York.

MSKCC is actually composed of two intimately related institutions. Memorial Hospital for Cancer and Allied Diseases, currently led by Physician-In-Chief, Dr. Robert Wittes, provides patient care, whose origins stemmed from a medical laboratory established on the campus of Cornell Medical Center and funded by John D. Rockefeller, in 1900. The original Memorial Hospital building was designed by Henry C. Pelton and constructed in 1939 by a group that included John J. Astor and his wife, Charlotte. Between 1970 and 1973 a new memorial hospital was built on the same site—originally donated by John D. Rockefeller, Jr.

Sloan–Kettering Institute, currently led by Dr. Thomas Kelly, is MSKCC's basic-science research arm. The research institute was established in 1945 with a US$4 million gift from the foundation of Alfred P. Sloan, Jr. Half the gift was to fund construction of a 13-story research facility and the other half to provide annual operating expenses. Charles F. Kettering, vice president and director of research for General Motors Corporation, was to organize and apply modern American industrial research techniques to cancer research.

In addition to the Sloan grant, a public campaign to raise an additional US$3 million to US$4 million was undertaken and an important financier who stepped in at a critical juncture was the ongoing supporter Laurance Rockefeller, of the philanthropic Rockefeller family.

At the August 8, 1945 announcement, Sloan and Kettering emphasized that the dramatic news of the atomic bomb, developed with a US$2 billion research program, was a graphic illustration of what can be accomplished by scientifically organized research as practiced by American industry. If as much money and talented personnel were available as the government had for the atomic bomb, they said, very rapid progress could be made in cancer research.

As of November 1, 2010, the President and CEO of Memorial Sloan-Kettering is oncologist and researcher Craig B. Thompson, MD. 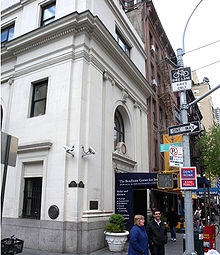 MSKCC has long been a leader in cancer surgery, chemotherapy, and radiotherapy. It was the first to develop services specifically dedicated to the psychiatric aspects of cancer, to the relief of cancer pain, and to genetic counseling.

Memorial Sloan-Kettering Cancer Center is affiliated with the Weill Cornell Medical College, the Tri-Institutional MD/PhD program and the Tri-Institutional Training Program in Chemical Biology, which include MSKCC as one of its three sites (along with Weill-Cornell and Rockefeller University). MSKCC and Weill-Cornell operate a joint graduate program in biomedical sciences, the Weill Cornell Graduate School of Medical Sciences. In 2004, Memorial Sloan-Kettering also established an independent graduate school, with a Ph. program in cancer biology: the Gerstner Sloan-Kettering Graduate School of Biomedical Sciences. The inaugural class was admitted in July 2006.

MSKCC's new Human Oncology and Pathogenesis Program, based at Memorial Hospital, focuses on translational research, with the goal of bringing discoveries made in the lab to the patient at the bedside.

Another focus of research at MSKCC is immunotherapy, or using the body's own immune system to fight cancer cells. In 2006 the center was one of six institutes (along with research centers at Harvard University, the Massachusetts Institute of Technology, Johns Hopkins University, the University of Chicago, and Stanford University) selected to receive a US$20 million grant for cancer research from the Ludwig Fund, created by the American billionaire Daniel K. Ludwig. The grant, one of the largest earmarked for cancer research the hospital has ever received, will be used for immunology research.

There are 470 beds at Memorial Hospital and 24,346 patients were admitted in 2010. As well, 515,835 outpatient visits were accommodated at its Manhattan and regional facilities combined. Memorial Sloan-Kettering opened a new surgical center in the summer of 2006 with 21 operating rooms.

The hospital in popular culture

Vampire Weekend's song "A-Punk" made a reference to Sloan–Kettering in one verse, saying:

"A thousand years in one piece of silver,
she took it from his lily-white hand,
showed no fear—she'd seen the thing,
in the young men's wing at Sloan–Kettering."

In the 2008 movie Step Brothers, Will Ferrell's character Brennan Huff claims to have smoked marijuana with Johnny Hopkins and Sloan Kettering.

In 1985, contract killer Joseph Paruta, who served under Sammy Gravano, was a terminal lung cancer patient, and was initiated into the Gambino crime family in a ceremony in his room at the cancer center and became a "made man." He later succumbed to the disease at his home in Bensonhurst, Brooklyn.