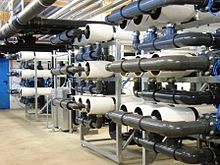 ultrafiltration in the swimming pool 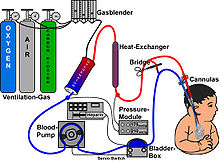 The particular advantage of membrane separation processes is that it operate without heating and thus are energetically usually lower than conventional thermal separation processes (distillation, Sublimation or crystallization). This separation process is purely physical and, thanks to its gentle separation, the use of both fractions (permeate and retentate) is possible. Therefore, the cold separation by membrane processes has been established particularly in the food technology, the biotechnology and pharmacy industrie. Furthermore, with the help of membrane separations realizeable that with thermal processes are not possible. For example, because azeotropics or isomorphics crystallization making a separation by distillation or recrystallization impossible. Depending on the type of membrane, the selective separation of certain individual substances or substance mixtures is possible. Important technical applications include drinking water by reverse osmosis (worldwide approximately 7 million cubic meters annually), filtrations in the food industry, the recovery of organic vapors such as gasoline vapor recovery and the electrolysis for chlorine production. But also in wastewater treatment, the membrane technology is becoming increasingly important. With the help of UF and MF (Ultra-/Mikrofiltration) it is possible to remove particles, colloids and macromolecules, so that wastewater can be disinfected in this way. This is needed if wastewater is discharged into sensitive outfalls, or in swimming lakes.

About half of the market has applications in medicine. As an artificial kidney to remove toxic substances by hemodialysis and as artificial lung for bubble-free supply of oxygen in the blood. Also the importance of membrane technology is growing in the field of environmental protection (NanoMemPro IPPC Database). Even in modern energy recovery techniques membranes are increasingly used, for example in the fuel cell or the osmotic power plant.

For the mass transfer at the membrane, two basic models can be distinguished: the solution-diffusion model and the hydrodynamic model. In real membranes, these two transport mechanisms certainly occur side by side, especially during the ultrafiltration.

Transport through pores - in the simplest case of pure transport convectively. This requires the size of the Pores to be smaller than the diameter of the to separate components. Membranes, which function according to this principle are used mainly in micro- and ultrafiltration. They are used to separate macromolecules from solutions, colloids from a dispersion or remove bacteria. During this process the not passing particles or molecules are forming on the membrane a more or less a pulpy mass (filter cake). This hampered by the blockage of the membrane the filtration. By the so-called cross-flow method (cross-flow filtration) this can be reduced. Here, the liquid to be filtered flows along the front of the membrane and is separated by the pressure difference between the front and back of the fractions into retentate (the flowing concentrate) and permeate (filtrate). This creates a shear stress that cracks the filter cake and lower the formation of fouling.

According to driving force of the operation it is possible to distinguish: 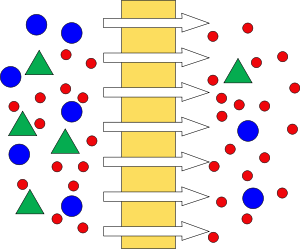 There are two main flow configurations of membrane processes: cross-flow and dead-end filtrations. In cross-flow filtration the feed flow is tangential to the surface of membrane, retentate is removed from the same side further downstream, whereas the permeate flow is tracked on the other side. In dead-end filtration the direction of the fluid flow is normal to the membrane surface. Both flow geometries offer some advantages and disadvantages. The dead-end membranes are relatively easy to fabricate which reduces the cost of the separation process. The dead-end membrane separation process is easy to implement and the process is usually cheaper than cross-flow membrane filtration. The dead-end filtration process is usually a batch-type process, where the filtering solution is loaded (or slowly fed) into membrane device, which then allows passage of some particles subject to the driving force. The main disadvantage of a dead end filtration is the extensive membrane fouling and concentration polarization. The fouling is usually induced faster at the higher driving forces. Membrane fouling and particle retention in a feed solution also builds up a concentration gradients and particle backflow (concentration polarization). The tangential flow devices are more cost and labor intensive, but they are less susceptible to fouling due to the sweeping effects and high shear rates of the passing flow. The most commonly used synthetic membrane devices (modules) are flat plates, spiral wounds, and hollow fibers.

Flat plates are usually constructed as circular thin flat membrane surfaces to be used in dead-end geometry modules. Spiral wounds are constructed from similar flat membranes but in a form of a “pocket” containing two membrane sheets separated by a highly porous support plate.[1] Several such pockets are then wound around a tube to create a tangential flow geometry and to reduce membrane fouling. Hollow fiber modules consist of an assembly of self-supporting fibers with a dense skin separation layers, and more open matrix helping to withstand pressure gradients and maintain structural integrity.[1] The hollow fiber modules can contain up to 10,000 fibers ranging from 200 to 2500 μm in diameter; The main advantage of hollow fiber modules is very large surface area within an enclosed volume, increasing the efficiency of the separation process. 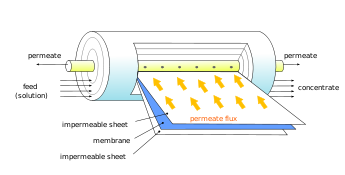 The selection of synthetic membranes for a targeted separation process is usually based on few requirements. Membranes have to provide enough mass transfer area to process large amounts of feed stream. The selected membrane has to have high selectivity (rejection) properties for certain particles; it has to resist fouling and to have high mechanical stability. It also needs to be reproducible and to have low manufacturing costs. The main modeling equation for the dead-end filtration at constant pressure drop is represented by Darcy’s law:[1]

where Vp and Q are the volume of the permeate and its volumetric flow rate respectively (proportional to same characteristics of the feed flow), μ is dynamic viscosity of permeating fluid, A is membrane area, Rm and R are the respective resistances of membrane and growing deposit of the foulants. Rm can be interpreted as a membrane resistance to the solvent (water) permeation. This resistance is a membrane intrinsic property and expected to be fairly constant and independent of the driving force, Δp. R is related to the type of membrane foulant, its concentration in the filtering solution, and the nature of foulant-membrane interactions. Darcy’s law allows to calculate the membrane area for a targeted separation at given conditions. The solute sieving coefficient is defined by the equation:[1]

where Cf and Cp are the solute concentrations in feed and permeate respectively. Hydraulic permeability is defined as the inverse of resistance and is represented by the equation:[1]

where J is the permeate flux which is the volumetric flow rate per unit of membrane area. The solute sieving coefficient and hydraulic permeability allow the quick assessment of the synthetic membrane performance. 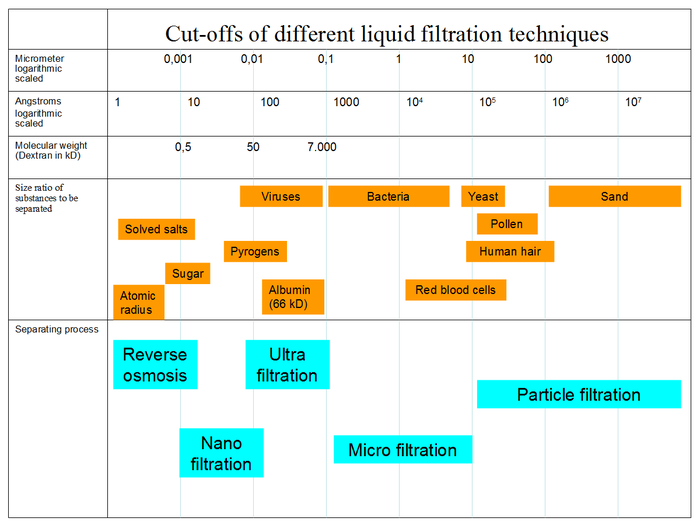 Ranges of membrane based separations.