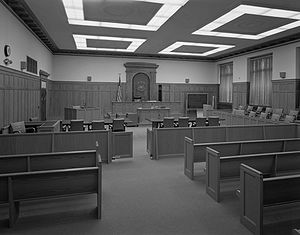 The bar (with swinging gate doors) in an American courtroom that separates the judge's bench and lawyer's tables from the public viewing area in the foreground. The term bar is also a metonym used to collectively define the group of licensed lawyers in a given jurisdiction.
For professional organizations of lawyers, see Bar association.

Bar in a legal context has three possible meanings: the division of a courtroom between its working and public areas; the process of qualifying to practice law; and the legal profession. 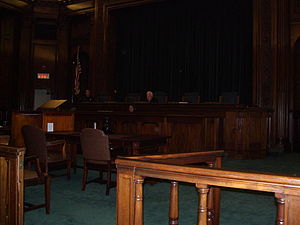 The bar (railing) at the Rhode Island Supreme Court

The origin of the term bar is from the barring furniture dividing a medieval European courtroom, similarly as the origin of the term bank for the location of financial transactions in medieval Europe. In USA and in Europe and many other countries referring to the law traditions of Europe, the area in front of the barrage is restricted to participants in the trial: the judge or judges, other court officials, the jury (if any), the lawyers for each party, the parties to the case, and witnesses giving testimony. The area behind the bar is open to the public.[1] This restriction is enforced in nearly all courts. In most courts, the bar is represented by a physical partition: a railing or barrier that serves as a bar.[2]

The bar may also refer to the qualifying procedure by which a lawyer is licensed to practice law in a given jurisdiction.

Main article: Admission to the bar in the United States

In the United States, this procedure is administered by the individual U.S. states. In general, a candidate must graduate from a qualified law school and pass a written test: the bar examination. Nearly all states use the Multistate Bar Examination, usually with additions for that state's laws. The candidate is then admitted to the bar. A lawyer whose license to practice law is revoked is said to be disbarred.

Main article: Call to the Bar

In the United Kingdom, the practice of law is divided between solicitors and barristers (advocates in Scotland). It is the latter who appear in court. When a lawyer becomes a barrister, he is called to the bar.

The Bar commonly refers to the legal profession as a whole. With a modifier, it may refer to a branch or division of the profession: as for instance, the tort bar, lawyers who specialize in filing civil suits for damages.

In conjunction with bench, bar may differentiate lawyers who represent clients (the bar), from judges or members of a judiciary (the bench). In this sense, the bar advocates and the bench adjudicates. Yet, judges commonly remain members of the bar; and lawyers are commonly referenced as Officers of the Court.

The phrase bench and bar denotes all judges and lawyers collectively.[2]