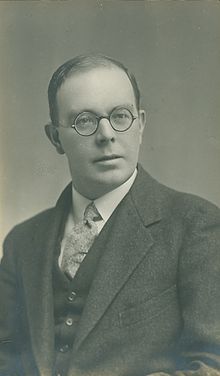 Burt is known for his studies on the heritability of IQ. Shortly after he died, his studies of inheritance and intelligence came into disrepute after evidence emerged indicating he had falsified research data. Some scholars have asserted that Burt did not commit intentional fraud.

Burt was born on 3 March 1883, the first child of Cyril Cecil Barrow Burt (b.1857), a medical practitioner, and his wife Martha.[1] He was born in London (some sources give his place of birth as Stratford on Avon, probably because his entry in Who's Who gave his father's address as Snitterfield, Stratford; in fact the Burt family moved to Snitterfield when he was ten).[2][3]

Burt's father initially kept a chemist shop to support his family while he studied medicine. On qualifying, he became the assistant house surgeon and obstetrical assistant at Westminster Hospital, London.[4] The younger Cyril Burt's education began in London at a Board school near St. James's Park.[4]

In 1890 the family briefly moved to Jersey then to Snitterfield, Warwickshire in 1893, where Burt's father opened a rural practice.[4] Early in Burt's life he showed a precocious nature, so much so that his father, a physician, often took the young Burt with him on his medical rounds.[5] One of the elder Burt's more famous patients was Darwin Galton, brother of Francis Galton. The visits the Burts made to the Galton estate not only allowed the young Burt to learn about the work of Francis Galton, but also allowed Burt to meet him on multiple occasions and to be strongly drawn to his ideas; especially his studies in statistics and individual differences, two defining characters of the London School of Psychology whose membership includes both Galton and Burt.

He attended King's School, Warwick, from 1892 to 1895, and later won a scholarship to Christ's Hospital, then located in London, where he developed his interest in psychology.[6]

From 1902 he studied at Jesus College, Oxford, where he specialized in philosophy and psychology, the latter under William McDougall. McDougall, knowing Burt's interest in Galton's work, suggested that he focus his senior project on psychometrics, thus giving Burt his initial inquiry into the development and structure of mental tests, an interest that would last the rest of his life. Burt was one of a group of students who worked with McDougall, which included William Brown, John Carl Frugel, May Smith, who all went on to have distinguished careers in psychology.[7] Burt graduated with second-class honours in 1906 which he supplemented by a teaching diploma.

In 1907 McDougall invited Burt to help with a nation-wide survey of physical and mental characteristics of the British people, proposed by Francis Galton, in which he was to work on the standardization of psychological tests. This work brought Burt into contact with eugenics, Charles Spearman, and Karl Pearson.

In the summer of 1908, Burt visited the University of Würzburg, Germany, where he first met the psychologist Oswald Külpe.[8]

In 1908 Burt took up the post of Lecturer in Psychology and Assistant Lecturer in Physiology at Liverpool University, where he was to work under the famed physiologist Sir Charles Sherrington.[6] In 1909 Burt made use of Charles Spearman's model of general intelligence to analyse his data on the performance of schoolchildren in a battery of tests. This first research project was to define Burt's life's work in quantitative intelligence testing, eugenics, and the inheritance of intelligence. One of the conclusions in his 1909 paper was that upper-class children in private preparatory schools did better in the tests than those in the ordinary elementary schools, and that the difference was innate.

In 1913, Burt took the part-time position of a school psychologist for the London County Council (LCC), with the responsibility of picking out the 'feeble-minded' children, in accordance with the Mental Deficiency Act of 1913.[6] He notably established that girls were equal to boys in general intelligence. The post also allowed him to work in Spearman's laboratory, and received research assistants from the National Institute of Industrial Psychology.

Burt was much involved in the initiation of child guidance in Great Britain and his 1925 publication The Young Delinquent led to opening of the London Child Guidance Clinic in Islington in 1927.[9] In 1924 Burt was also appointed part-time professor of educational psychology at the London Day Training College (LDTC), and carried out much of his child guidance work on the premises.[10]

In 1931 he resigned his position at the LCC and the LDTC after he was appointed Professor and Chair of Psychology at University College, London, taking over the position from Charles Spearman, thus ending his almost 20-year career as a school psychological practitioner. While at London, Burt influenced many students, including Raymond Cattell and Hans Eysenck, and toward the end of his life, Arthur Jensen and Chris Brand. Burt was a consultant with the committees that developed the Eleven plus examinations. This issue, and the allegations of fraudulent scholarship against him, are discussed in various books and articles listed below, including Cyril Burt: Fraud or Framed and The Mismeasure of Man.

In 1942, Burt was elected President of the British Psychological Society and in 1946 became the first British psychologist to be knighted for his contributions to psychological testing and for making educational opportunities more widely available, according to an account by J. Philippe Rushton.[11] Burt was a member of the London School of Differential Psychology, and of the British Eugenics Society. Because he had suggested on radio in 1946 the formation of an organization for people with high IQ scores, he was made honorary president of Mensa in 1960. He officially joined Mensa soon thereafter.[12]

At age 68, Burt retired but continued writing articles and books. He died of cancer at age 88 in London on 10 October 1971.

Over the course of his career Burt published numerous articles and books on a host of topics ranging from psychometrics to philosophy of science to parapsychology. It is his research in behavior genetics, most notably in studying the heritability of intelligence (as measured in IQ tests) using twin studies that have created the most controversy, frequently referred to as "the Burt Affair."[13][14][15][16] Shortly after Burt died it had become known that all of his notes and records had been burnt, and he was accused of falsifying research data. The 2007 Encyclopædia Britannica noted that it is widely acknowledged that his later work was flawed and many academics agree that data were falsified, though his earlier work is often accepted as valid.[17]

From the late 1970s it was generally accepted that "he had fabricated some of the data, though some of his earlier work remained unaffected by this revelation."[17] This was due in large part to research by Oliver Gillie (1976) and Leon Kamin (1974).[18][19] The possibility of fabrication was first brought to the attention of the scientific community when Kamin noticed that Burt's correlation coefficients of monozygotic and dizygotic twins' IQ scores were the same to three decimal places, across articles – even when new data were twice added to the sample of twins. Leslie Hearnshaw, a close friend of Burt and his official biographer, concluded after examining the criticisms that most of Burt's data from after World War II were unreliable or fraudulent.[20]

In 1976, the London Sunday Times claimed that two of Burt's supposed collaborators, Margaret Howard and J. Conway, were invented by Burt himself. They based this on the lack of independent articles published by them in scientific journals, and the fact that they allegedly only appeared in the historical record as reviewers of Burt's books in the Journal of Statistical Psychology when the journal was redacted by Burt. However, Miss Howard was also mentioned in the membership list of the British Psychological Society, Prof. John Cohen remembered her well during the 1930s and Prof. Donald MacRae had personally received an article from her in 1949 and 1950. According to Ronald Fletcher there is also full documentary evidence of the existence of Miss Conway.[11][21][22]

William H. Tucker argued in a 1997 article that: "A comparison of his twin sample with that from other well documented studies, however, leaves little doubt that he committed fraud."[23] Robert Joynson and Ronald Fletcher published books in support of Burt.[24][verification needed] Cambridge University Professor of Psychology Nicholas Mackintosh edited Cyril Burt: Fraud or Framed?, which was presented by the publisher as arguing that "his defenders have sometimes, but by no means always, been correct, and that his critics have often jumped to hasty conclusions."[25]

Psychologists Arthur Jensen and J. Philippe Rushton have pointed out that the controversial correlations reported by Burt are in line with the correlations found in subsequent twin studies.[11][26] Rushton (1997) wrote that five different studies on twins reared apart by independent researchers corroborated Cyril Burt's findings and had given almost the same heritability estimate (average estimate 0.75 vs. 0.77 by Burt).[27] Jensen has also argued that "[n]o one with any statistical sophistication, and Burt had plenty, would report exactly the same correlation, 0.77, three times in succession if he were trying to fake the data."[26] W.D. Hamilton claimed in a 2000 book review that the claims made by his detractors in the so-called "Burt Affair" had been either wrong or grossly exaggerated.[28]

According to Earl B. Hunt, it may never be found out whether Burt was intentionally fraudulent or merely careless. Noting that later studies of the heritability of IQ have produced results very similar to those of Burt's, Hunt argues that Burt did not harm science in the narrow sense of misleading scientists with false results, but that in the broader sense science in general and behavior genetics in particular were profoundly harmed by the Burt Affair, leading to an unjustified general rejection of genetic studies of intelligence and a drying up of funding for such studies.[29]

Readings on the Burt Affair

Archival collections related to Burt in the United Kingdom.[30]