This article is about the V/Line service. For the railway itself see Port Fairy railway line

The Geelong Line is a regional passenger rail service operated by V/Line in Victoria, Australia. It serves passengers between state capital Melbourne and the regional city of Geelong.

According to V/Line it carries more passengers than any other regional rail line in Australia.[1]

Trains on the Geelong – Melbourne corridor are chronically late. V/Line has failed to meet their punctuality targets since 2006. As of March 2010, trains had officially run late for 44 consecutive months on the Geelong line.[2] The poor performance of V/Line has been well documented in the local Geelong press.[3] Recurring issues on the line include poor communication,[4] commuters worried about losing their jobs in Melbourne due to delays [5] and overcrowding.[6] In September, 500 Geelong Cats supporters were delayed an hour to the MCG for the Saints – Cats clash due to a faulty V/Line train.[7]

V/Line commuter services to Geelong once terminated at Geelong station, being extended to the existing South Geelong station in 1968,[8] and to the newly reinstated Marshall station in 2005.[9] Train services between Melbourne and Geelong received a government funded upgrade under the Regional Fast Rail project between 2004 and 2005, with new high speed VLocity railcars manufactured by Bombardier in Dandenong entering service to Geelong in early 2006.[10] There have been calls to electrify the line, but plans were put on hold by the State Government in 2002,[11] with Diesel locomotives and railcars utilised instead. 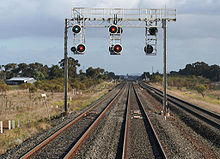 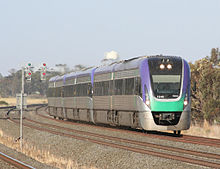 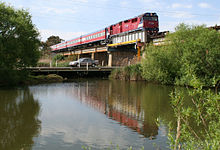 V/Line operates hourly passenger services to Melbourne, with travel times from Geelong to Melbourne Southern Cross Station less than 60 minutes, making it a popular alternative to driving for Geelong residents working in the Melbourne area.[12] Sprinter and VLocity railcars are used, as well as locomotive hauled N, S and H type carriages. A more frequent service operates during rush hours.

The stations between Lara and Marshall also fall into the Geelong Transit System ticketing system. Beyond Marshall thrice daily passenger trains run as the Warrnambool Line. Services run by Metro Trains Melbourne also operate as far as Werribee station as the Werribee Line.