The Porto Half Marathon (Portugese: Meia-Maratona do Porto) is an annual half marathon road running event which follows the River Douro, starting in the city of Porto and ending in Vila Nova de Gaia. Known as the Sportzone Half Marathon for sponsorship reasons, the inaugural edition was held in 2007 and it typically takes place in either September or October.[1]

The competition attracts top level elite athletes, principally East African and Portuguese runners.[2] Since its inception, all the men's and women's races have been won by East African competitors. Among those to top the men's podium are Olympic champions Haile Gebrselassie and Samuel Wanjiru, while former world champion over 10,000 metres, Berhane Adere, was the 2010 women's winner.[3][4]

The half marathon course begins near Freixo Bridge bridge and heads westwards, passing Cais de Gaia and Afurada before turning back on itself. It goes east, crossing the Douro over Dom Luís Bridge and again loops back once the route reaches the area near Freixo Bridge again. The course heads west towards the mouth of the Douro, going past Miragaia and finishing in the Jardim do Calém in Vila Nova de Gaia. In addition to the main half marathon event, there is a smaller 5 km mini-marathon which goes direct from Freixo Bridge to Vila Nova de Gaia.[6] 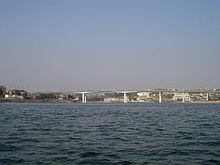 The race start point is near Freixo Bridge.

The race is one of three major annual running events organised in the city by the Run Porto group, alongside the Porto Marathon and the São Silvestre Porto.[7][8]