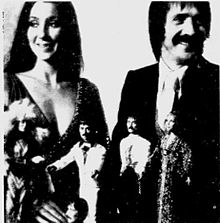 In 1976 Sonny and Cher appeared to promote the dolls based on the characters they portrayed on their TV show.

In May 1976, Mego launched a highly successful 12 ¼ inch celebrity doll line, to directly compete with Mattel's Barbie doll.[12][13] The first dolls were Sonny and Cher, with Bob Mackie designing an extensive wardrobe for Cher.[3][14] Mego held a 1,000 guest dinner dance at the Waldorf-Astoria to launch the dolls.[15]

Mego produced three versions of the Cher doll. The first, packaged in an orange box, had extra long hair and wore a salmon-colored gown with a flared bottom. The second doll, Growing Hair Cher, came in a purple box and featured a "Key" that kids could use to change the length of Cher's hair. This doll wore a black and silver dress and black open-toed shoes. Growing Hair Cher's dress can be found with a number of subtle style variations, and she was packaged in two different types of boxes. The third Cher was more cheaply made, with a hollow plastic body without jointed hands. She was sold wearing a one piece swimsuit (yellow, blue or red). This doll, available in 1978, was packaged in a narrower orange box featuring what is commonly referred to as the cher "Gypsy" picture.

In 1977, the catalog Mego was provided with many items about Cher, especially on clothes Cher doll outfits were designed either from Bob Mackie originals or by Bob Mackie himself. They recreated some of Cher's iconic outfits from her TV variety shows like: the Laverne fit, the Indian Squaw fit (from Half Breed), the Foxy Lady fit and many others. Most of the clothes were sold separately or were contained in the two cabinets, along with shoes and pink hangers.[citation needed]

Besides the dolls, Mego produced some toys for the line of Sonny & Cher. Those were big in the late 1970s, the time of The Cher Show and The Sonny & Cher Show in 1977.

Many toys were available in the catalog of 1977. Two wardrobes, the first Cher's Dressing Room was a closet/backstage dressing room/carrying case for outfits. Like the "Dressing Room", the Cher Travel Trunk was a holding spot for the many outfits of the doll.[16] Mego in 1977 released also Cher's Infilatable Tent Set and the Sonny & Cher's Roadster. The red Roadster is convertible, while the box shows a picture of Sonny and Cher driving.[16] To re-create the stage for their show was released Cher Theatre in the Round. This was a revolving stage with four scenes: the main stage, Sonny's Pizzeria, and Cher's dressing room, this also came with piano, microphone stand and dressing table.[16] The Cher's Makeup Center was released in competition with The Barbie Makeup Center and came with curlers and face paint.[16] The last items of the catalog are Cher's Sing Along Phono a portable record player and the Cher's Fashion Jewelry.[16]

The only defect of the dolls is their hair, which over time will ruin, and the eyelashes, which over time can lose. Today, the dolls and boxed outfits in mint condition sell for anywhere from $30 to $400 each. The dolls are now collectables and can be found on Ebay.[18]