The company logo depicts the word Megger with red capital "M" and the remaining letters in black, all on white background.

Over the years there were several companies whose names were associated or assimilated into Megger. 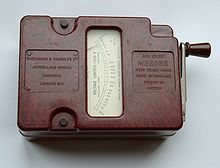 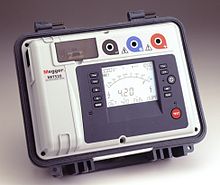 Sydney Evershed (1858–1939) and Ernest Vignoles bought the instrument section of Goolden and Trotter (where they both worked) and founded Evershed & Vignoles Limited on 5 February 1895. [2] However, it is likely that the origins of Megger can be traced back to 1889. [3] The company was based at Acton Lane Works, Chiswick, London, England where it moved from Westbourne Park in 1903.

One of them was a "hand dynamo", [6] which allowed generation of voltages high enough to measure resistance in the megohm range and thus construction of a first portable insulation tester. The MEGaohm metER was then named as Megger and the word became a trademark name registered on 25 May 1903. [7] The invention became a popular method of insulation testing and by 1920s it was "well-known" by other engineers. [8] [9]

Due to electromagnetic interference the first Megger insulation testers were built as two separate boxes – one for voltage generation and one for measurement. They were later integrated into a single device in a Bakelite case and special foldable handle for driving the dynamo. The most popular was the so-called "Wee Megger" (voltage up to 500 V and resistance up to 20 megohms), but there were larger devices like the "Major Megger", "Meg" or "Megger insulation tester", which could generate up to 2500 V and measure resistance up to 20,000 megohms. [10] [11] (Modern version of Megger - model MJ15 - can generate up to 5 kV.[12]) 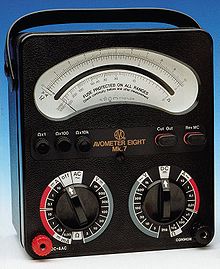 The invention of the first multimeter is attributed to a Post Office engineer Donald Macadie, [17] who became dissatisfied with having to carry many separate instruments required for the maintenance of the telecommunication circuits. Macadie invented a first instrument, which could measure Amps, Volts and Ohms, so the multifunctional meter was then named as AVO. [18]

Macadie took his idea to the Automatic Coil Winder and Electrical Equipment Company (ACWEECO, founded probably in 1923).[18] The first AVO was put on sale in 1923, and although it was initially a DC-only instrument many of its features remained almost unaltered right through to the last Model 8.

The original AVO multimeter was manufactured continuously since its first appearance in 1923. The final model was made in October 2008, when its production was terminated only due to increasing problems with obtaining the spare mechanical parts. The final AVO Model 8 introduced in 1951 became an electronic device present in the market for 57 years without major modifications.[20][21]

In 1996 the Institute was certified with ISO 9001 and so far over 230,000 electrical maintenance and testing technicians and engineers from around the world have attended training courses.[22]

The Institute has a Technical Resource Center - an online store offering books, standards, training materials, Personal Protective Equipment, and tools. [23] The actual training can be organised in different sites around the world, for example at the Megger facility in Paris. [24]

The AVO Electrical Engineering Division was created in 2002 and it specialises in power system studies, specifically arc flash hazard analysis.[25]

In 1970, along with other members of the George Kent Group the company was acquired by Thorn Electrical Industries founded in 1936. [26] The company was taken over by Thorn EMI in 1967 (linked with company EMI), which at the same time also bought AVO Limited.

In 1987 the name of the company was for the first time changed to Megger Instruments Limited. [27]

Megger Instruments Limited was based at AVO’s Dover site, in Archcliffe Road, Dover, CT17 9EN, Kent, England, which is also the present location of the UK branch of the company.

Finally the whole Megger group changed its name to Megger Group Limited in 2002, as it is known today.

In recognition of the ground breaking inventions, which made it possible to build the Megger group the main meeting rooms at the Dover site are named after Evershed and Macadie.

For many years, the James G. Biddle Company in Pennsylvania, was the USA importer of Megger products, as well as a manufacturer of equipment under their own name. In 1989, using concepts introduced by Commonwealth Edison Company of Chicago, Biddle started development of a range of equipment to test the integrity of large battery systems, which led to the BITE (Battery Impedance Test Equipment) line of products.

In 1991 Biddle, Megger and MultiAmp joined together to form AVO International. The use of the Biddle trademark was retained for many of products still available today. Biddle was one of the first companies to provide commercial cable fault locators. [29]

Megger Group Ltd. owns the US site in Dallas, Texas. They manufacture terminal blocks and test switches under the trademark States (existing since 1940s). [30]

PowerDB was acquired in autumn 2005. They provide "acceptance and maintenance test data management software" which is compatible with many Megger products. [31]

In October 2008 Megger Group Ltd. acquired Pax Diagnostics in Sweden. Pax manufactures transformer testing and insulation diagnostics equipment. Pax Diagnostics was founded in 2004 by former employees of Programma Electric, and it is also based in Täby. [35]

The first trademark of the company, the name Megger was registered in 1903 and it remains the intellectual property of the Megger Ltd.

It is incorrect to use the word "Megger" as a verb, noun or in the plural form. [36] It is an infringement of the trademark if used in reference to a product not made by the Megger Group or its subsidiaries.[37][38], see genericized trademark.

Most of the names and trademarks of the acquired companies are now owned by Megger Group Ltd. Apart from "Megger" itself, the best known ones are: AVO, Biddle, Biddle AVO, Biddle Megger, States, PowerDB, and recently Programma and Pax Diagnostics.

However, some of the names of the products are also protected: Megger, AVO, DLRO, MFT, MIT, MPRT, etc.

The Group publishes a copyrighted but distributed for free quarterly magazine titled "Electrical tester" aimed at electrical engineers who might use products from the Megger range.[39]

It is difficult to assess the actual number of patents, because some of them were obtained before acquired companies joined Megger Group. The original Megger insulation tester patent is over 100 years old. 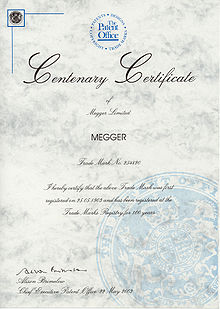 The table shows a timeline of some typical devices introduced by Megger Group companies (not necessarily covered with patents). In recent years the company has also paid more attention to the ergonomics and design of their products. [41]

Certificates of Conformity are supplied with most instruments. Depending on product and site the metrology can be traceable to:

Dover site has its own EMC laboratory and SMT machines. However, many of the mechanical parts are purchased from other suppliers. (This was one of the factors why production of AVO Model 8 was discontinued.) 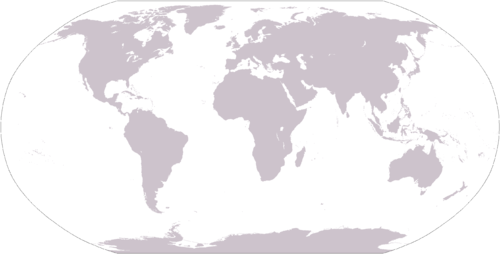 The Group has over 1000 distribution points in 132 countries. 85% of sales are made via the distribution network. There are sales centres in several countries and products are also sold via specialised distributors including RS Components and more recently Test Equipment Connection Corporation. [43] [44]

There are total of 15 sales and technical support offices in the USA, Canada, Dover, Paris, Mumbai, Sydney, and Bahrain.[45] 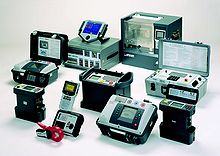 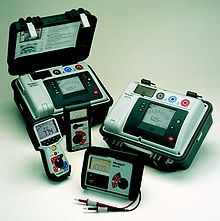 The equipment is roughly divided into three groups: Power, Building and Wiring, and Telecommunications.

In the UK, Megger regularly sponsors first year projects at the University of Kent, [47] as well as collaborating with other universities.

Megger donated 5% of its Chinese sales revenue (for three months) to the local Red Cross after the 2008 Sichuan earthquake. This was also preceded with 15% reduction on all their equipment sold in China immediately after the earthquake. [48]

Over $9,000 of electrical testing equipment has been donated to Mesalands Community College’s North American Wind Research and Training Center (NAWRTC). [49]

A blood donation vehicle comes regularly to the Megger's site at Dover.[50]