Screech owls or Screech-owls are typical owls (Strigidae) belonging to the genus Megascops. Twenty-one living species are known at present, but new ones are frequently recognized and unknown ones are still being discovered on a regular basis, especially in the Andes. For most of the 20th century, this genus was merged with the Old World scops owls in Otus, but nowadays it is again considered separate based on a range of behavioral, biogeographical, morphological and DNA sequence data.

Screech owls are restricted to the Americas. Some species formerly placed with them are nowadays considered more distinct. See below for details. The common name "screech owl" is sometimes used for the not closely related Barn Owl as well.

As usual for owls, female screech owls are usually larger and fatter than the males of their species, with owls of both sexes being compact in size, shape, and height. The Eastern Screech Owl Megascops asio is one of the smallest species of owls in North America.[1] All of the birds in this genus are small and agile. Screech owls are generally colored in various brownish hues with usually a whitish, patterned underside, which helps to camouflage them against the bark of trees. Some are polymorphic, occurring in a grayish- and a reddish-brown morph.

Screech owls hunt from perches in semi-open landscapes. They prefer areas which contain old trees with hollows; these are home to their prey which includes insects, reptiles, small mammals such as bats and mice and other small birds. Screech-owls have a good sense of hearing which helps them locate their prey in any habitat. They also possess well-developed raptorial claws and a curved bill, both of which are used for tearing their prey into pieces small enough to swallow easily. They usually carry their prey back to their nests, presumably to guard against the chance of losing their meal to a larger raptor.

Screech owls are primarily solitary. During the late-winter breeding season, however, males make nests in cavities, sometimes reusing abandoned nests of other animals, to try to attract females. The females select their mate based on the quality of the cavity and the food located inside. During the incubation period, the male feeds the female. These birds are monogamous, with biparental care. The young of most screech owls are altricial to semialtricial.[2]

The northern screech owls are found in Eastern States ec. New Jersey, New York, etc. The screech owls are named for their piercing calls. The normal territorial call is not a hoot as with some owls, but a trill consisting of more than 4 individual calls per second given in rapid succession (although the sound does not resemble screeching or screaming). They also have a kind of "song" which is used in courtship and, as a duet, between members of a pair. Calls differ widely between species in type and pitch, and in the field are often the first indication of these birds' presence, as well as the most reliable means to distinguish between species. The distinctness of many species of screech-owls was first realized when vastly differing calls of externally similar birds from adjacent regions were noted.

The evolutionary relationships of the scops and screech owls are not entirely clear. What is certain is that they are very closely related; they may be considered sister lineages which fill essentially the same ecological niche in their allopatric ranges. A screech owl fossil from the Late Pliocene of Kansas[3] (which is almost identical to Eastern and Western Screech Owls) indicates a longstanding presence of these birds in the Americas, while coeval scops owl fossils very similar to the Eurasian Scops Owl have been found at S'Onix on Majorca.[4] The scops and screech owl lineage probably evolved at some time during the Miocene (like most other genera of typical owls), and the three (see below) modern lineages separated perhaps roughly 5 million years ago. Note that there is no reliable estimate of divergence time, as Otus and Megascops are osteologically very similar, as is to be expected from a group that has apparently conserved its ecomorphology since before its evolutionary radiation. Like almost all scops and screech owls today, their common ancestor was in all probability already a small owl, with ear tufts and at least the upper tarsus ("leg") feathered.

However that may be, the hypothesis that the group evolved from Old World stock[5] is tentatively supported by cytochrome b sequence data.[6] The screech-owls also have a different placement of the procoracoid (less of an anterior incline) and coracoid bones compared to other New World owls.[7]

The splitting of Otus sensu lato

While late-19th-century ornithologists knew little of the variation of these cryptic birds which often live in far-off places, with every new taxon described a few differences between the Old and New World "scops" owls became more and more prominent. Namely, the scops owls give a whistling call or a row of high-pitched hoots with fewer than four individual hoots per second. This call is given in social interaction or when the owl tries to scare away other animals. The screech owls on the other hand are named for their piercing trills of more than four individual notes per second and as noted above they also have a kind of song, which is absent in the scops owls. There are a few other differences such as brown coloration below being common in scops-owls and almost never seen in screech owls, but the difference in vocalizations is most striking.

By the mid-19th century, it was becoming clear that Otus encompassed more than one genus. First, in 1848, the screech owls were split off as Megascops. Subsequently, the highly apomorphic White-throated Screech Owl of the Andes was placed in the monotypic genus Macabra in 1854. Gymnasio was established in the same year for the Puerto Rican Screech Owl, and the Bare-legged Owl (or "Cuban Screech Owl") was separated in Gymnoglaux the following year; the latter genus was sometimes merged with Gymnasio by later authors.

By the early 20th century, the lumping together of taxa had come to be preferred. The 3rd edition of the AOU checklist in 1910 placed the screech owls back in Otus. Although this move was never unequivocally accepted, it was the dominant treatment throughout most of the 20th century. In 1988 it was attempted to resolve this by reestablishing all those genera split some 140 years earlier at subgenus rank inside Otus.[8] Still, the diversity and distinctness of the group failed to come together in a good evolutionary and phylogenetic picture, and it was not until the availability of DNA sequence data that this could be resolved. In the mid-to-late 1990s, preliminary studies of mtDNA cytochrome b across a wide range of owls found that even the treatment as subgenera was probably unsustainable and suggested that most of the genera proposed around 1850 should be accepted.[6] Though there was some debate about the reliability of these findings at first,[9] they have been confirmed by subsequent studies. In 2003, the AOU formally accepted the genus Megascops again.[10]

It was also confirmed that the Bare-legged Owl was distinct enough to warrant separation in its own genus. The Puerto Rican Screech Owl, however, is just a slightly aberrant Megascops. Furthermore, the White-throated Screech Owl was recognized as part of an ancient lineage of Megascops – including also the Whiskered Screech Owl and the Tropical Screech Owl which previously were considered to be of unclear relationships – and indeed its call structure is not too dissimilar from the latter. Its distinct coloration, approximated in the Southern Whiskered Screech Owl (Megascops trichopsis mesamericanus), is thus likely the result of strong genetic drift. 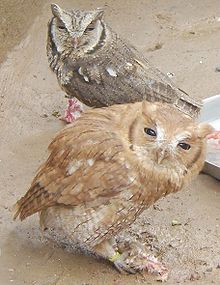