MEEN (Arabic: مين ‎) is a Lebanese rock band founded by Fouad and Toni Yammine in 2006. The band is best known for its humorous and sarcastic style, and most notably for performing in native Lebanese, not traditional Arabic. 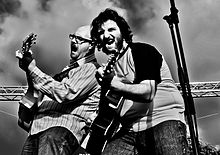 In 2006, Meen had its very first concert at the Saint Joseph University in Beirut, where, for the first time, the band performed for a small crowd of 300 persons. Soon, the band was touring in other Lebanese Universities. Late 2006, Meen's single Banadoura were published in the Banadoura compilation,[1] a lebanese compilation featuring lebanese underground music for the latest 20 years.[2]

In 2007, Meen wrote and released “Yalla Nerkoud”, the official song of that year’s Beirut Marathon and performed the song on the finish line the day of the event and the performance was broadcasted live on most lebanese TV channels.

In 2008, the An-Nahar national newspaper contacted Meen and asked them to compose songs for the yearly memorial event of Gebran Tueni. Meen wrote five songs for the event, and all were released as an album entitled “Adar el A7rar” (Destiny of the Free). Meen performed the songs live in an event that was boradcasted live on all lebanese TV stations.[3]

In 2009, the band released the album “Teer w 3aleh ya Balon” with 5 original songs composed and recorded for the children’s play of the same name. In May 2009, the band performed in a big concert at the heart of the city at "theatre tournesol".[4][5] This event was recorded and later released as a live album, on December 8, comprising thirteen original songs in pure Meen style. On the same date, Meen also released an 8 tracks studio christmas album entitled "Min L Manjam 3al marrekh.[6] And in less than two weeks, both albums were in the top 20 virgin megastore best sellers (At number 2 and number 11) making the band the best selling artist in lebanon during 2009 christmas season.

In 2010, Meen was touring all around the country and performing in private and public events and festivals.[7][8]

As stated in numerous interviews, Meen fervently promotes the Lebanese dialect versus the culturally adopted traditional Arabic. The band members consider it only normal to sing in the spoken language of everyday conversations, even including the occasional English or French words that naturally occur in them. Their lyrics reflect this unique and rare approach.[10]

Meen’s song topics are varied and are usually quite mordant and sometimes critical of the political climate in Lebanon. In their single, “Kamlo l 7arb” (“Continue the War”), released in 2006, Meen mockingly sings on in a beautiful ballade “let the war carry one, and let the children die”.

Another fan favorite, “Nasheed el Banadoura” (“Anthem of the Tomato”), invites people to use tomatoes as weapons for an artistic revolution.[11]

Meen’s music style is purely western. Even though oriental instruments are occasionally used, like the buzuk, the riq, the oud, and others, the music is mainly considered rock/blues, with a traditional rock composition of two guitars, one bass guitar, drums and a synth.

Meen is the first lebanese band to release its music under the Creative Commons Licence since 2006.

Other interviews and reviews