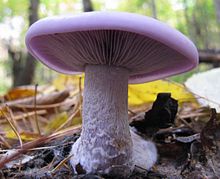 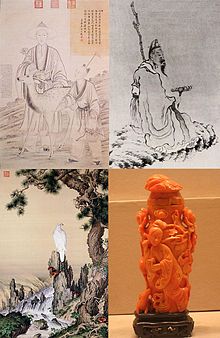 Inonotus obliquus (chaga) has a history of medicinal use spanning 500 years, in parts of Russia and Northern Europe.[7] The ancient Egyptians considered mushrooms food for royalty.[8] It is written in the Hadith, "truffles (desert truffle) are manna which Allah, sent to the people of Israel through Moses, and its juice is a medicine for the eyes". [9] A review noted several pharmacopoeias from Hungary, China, and India, include Fomes fomentarius (amadou).[1] A review noted, that as early as the 16th century, Inonotus obliquus (chaga) was used as an anticancer agent in Russia and parts of Northern Europe.[7]

Mushroom stones dating to 3000 BC, have been recovered in Mesoamerica, and were associated with the Olmec, Zapotec, Maya and Aztec.[10]

Polysaccharides and polysaccharide-protein complexes from medicinal mushrooms may enhance innate immune responses, resulting in antitumor activities. "While the mechanism of their antitumor actions is still not completely understood, stimulation and modulation of key host immune responses by these mushroom polymers appears central. Several of the mushroom polysaccharide compounds have proceeded through phases I, II, and III clinical trials and are used extensively and successfully in Asia to treat various cancers and other diseases."[11]

19 species of endophytic fungi can synthesize paclitaxel, one of the most important anticancer drugs known. A fungus was the original source of griseofulvin and Fusarium oxysporum was reported producing vinblastine. Griseofulvin, taxol, and vinblastine, share the same anticancer mechanism, halting cell division at mitosis, by inhibiting microtubule activity.[18]

The first characterized zaragozic acids, were isolated from a sterile fungal culture of S. intermedia and L. elatius.[21]

Certain species of mushrooms contain psilocybin or psilocin, most notably Psilocybe (magic mushrooms). The compounds have also been found in members of the genera Gymnopilus, Panaeolus, Pluteus, and Inocybe, among others.[22] If consumed, psilocybin is dephosphorylated to psilocin, which closely resembles the neurotransmitter serotonin. Psilocin interacts with serotonin receptors as a partial, non-selective, agonist.[23]

Mushrooms with reported in vitro antiviral, antibacterial, antifungal, and antiparasitic activities are shown in the table below.

Ergothioneine, an antioxidant that is known to accumulate in certain parts of the body, is present in Flammulina velutipes (enokitake)[108] and Agaricus bisporus.[109]

Agaricus subrufescens (A. blazei, A. brasiliensis, A. sylvaticus)

Agrocybe aegerita may have anticancer and immune enhancing activities.[131]

A lectin from Boletus edulis was found to inhibit several malignant cell lines and bind to a neoplastic cell specific T-antigen disaccharide.[132]

An extract of Coprinus comatus inhibited the proliferation and viability of a androgen-sensitive human prostate adenocarcinoma cell line.[133]

Lentinan and Active Hexose Correlated Compound (AHCC), are isolates of Lentinula edodes. "There have been numerous clinical trials of Lentinan in Japan, though none have been placebo-controlled and double-blinded. However, Lentinan has been approved for clinical use in Japan for many years, and is manufactured by several pharmaceutical companies. Intraperitoneal lentinan is widely used as an adjuvant treatment for certain cancers in Japan and China."[140] Research has shown AHCC may offer antiviral activity.[141][142][143]

Lentinus edodes mycelia (LEM) extract, is a researched extract derived from the mushroom.[144]

Although Phallus impudicus is not considered a choice edible, a review noted extracts from the mushroom have anti-tumor activity.[146] The mushroom was also studied clinically, in relation to venous thrombosis.[147]

An extract of Pleurotus djamor was found to inhibit proliferation of hepatoma cells and breast cancer cells in vitro.[148]

An extract of Pleurotus eryngii stimulated immune function in vitro.[149]

Tremella fuciformis is occasionally used in Chinese medicine as an immune tonic and for treating exhaustion.

Mushroom cell walls contain chitin, which is indigestible. To break down chitin, and allow digestion, a heated extraction process is required. The following mushrooms can be consumed only in the form of tea, herbal tonic, or medicinal soup.

Antrodia camphorata is a medicinal mushroom associated with Taiwan. Research has noted the mushroom may have hepatoprotective, antihypertensive, anti-hyperlipidemic, immuno-modulatory, anticancer, anti-inflammatory and antioxidant activities.[172]

Astraeus hygrometricus is documented in Chinese and Indian herbal medicine. Research has shown the mushroom may contain immunomodulators.[173] In a mouse model, the mushroom demonstrated anticancer properties.[174]

Phellinus linteus is a medicinal mushroom associated with Korea. "Scientists have demonstrated that the extracts from fruit-bodies or mycelium of Phellinus linteus not only stimulate the hormonal and cell-mediated immune function and quench the inflammatory reactions caused by a variety of stimuli, but also suppress the tumor growth and metastasis. Mounting evidence from different research groups has shown that Phellinus linteus induces apoptosis in a host of murine and human carcinomas without causing any measurable toxic effects to their normal counterparts."[204]

Phellinus linteus is known to contain interfungins A, a compound that may protect against hyperglycemia-mediated protein damage.[205]

Piptoporus betulinus may have anticancer properties.[206] Ötzi the Iceman was found carrying Piptoporus betulinus wrapped in a leather string. Researchers have noted the mushroom was most likely used medicinally, after Ötzi was noted to be infected by an intestinal parasite.[207]

A review published in 2009, noted, Poria cocos may have anticancer and immune enhancing activities.[216]

"Schizophyllan an isolate of Schizophyllum commune, is relatively similar to lentinan in composition and biological activity, and its mechanism of immunomoduation and anti-tumour action appears to be quite similar."[217]

SSG is a a highly branched beta-1,3-glucan extract of Sclerotinia sclerotiorum. SSG has been researched for possible health benefits.

An extract of Daedalea gibbosa inhibited chronic myeloid leukemia in a mouse model.[218]

According to MD Anderson Cancer Center, "PSP may have positive effects upon immune parameters, percent body fat and disease progression in patients with non-small cell lung cancer based upon one randomized and blinded controlled clinical trial. PSK may have positive effects upon disease and survival outcomes based upon the preponderance of findings from randomized controlled studies; however, the lack of blinding in these trials is a cause of concern."[219]