The VCU Medical Center is composed of five schools and is located on the MCV Campus.

History of the Medical College of Virginia/ VCU Medical Center 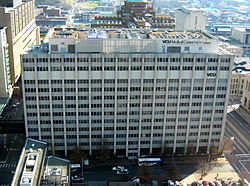 On December 1, 1837, the president and trustees of Hampden-Sydney College created a medical department to be located at Richmond.[8]

Founders of the college

Dr. Richard Lafon Bohannan – Professor of Obstetrics and Diseases of Women and Children [9]

Dr. John Cullen – Professor of Theory and Practice of Medicine [9]

The college opened on November 5, 1838 in the old Union Hotel located at the corner of Nineteenth and Main Streets.[11] MCV was founded in 1838 as the Medical Department of Hampden-Sydney College. There were forty-six students enrolled in the first class lasting from November 5, 1838 – April 4, 1839.[12] Students paid $20 to the professors for each of the six courses.[13]

The Medical Department of Hampden-Sydney College received an independent charter from the General Assembly in 1854 and became the Medical College of Virginia (MCV), and shortly thereafter transferred all its property to the Commonwealth and became a state institution in 1860.[14] There had not been for a separate hospital where patients had been housed within the College buildings since the beginning. A new hospital was built, known as the College Infirmary, was built at a cost of $22,336.57 and opened in April, 1861.[15]

Soon the Civil War erupted, and the College found itself playing an important role in the education of Confederate surgeons and in the hospital care of wounded and sick military personnel.[16] During the Civil War, the school remained open and it graduated a class every year throughout the conflict. The MCV is the only Southern medical school still in existence to have done so.[17]

In 1867, the College’s first outpatient clinic was established when the faculty agreed to cooperate with the Freedmen’s Bureau and the City of Richmond in the establishment of a “dispensary for the relief of the sick poor, both white and colored.”[18]

The University College of Medicine

A second medical school, the "College of Physicians and Surgeons" (later the "University College of Medicine"), was founded by Dr. Hunter McGuire in 1893, just two squares from the Egyptian Building.[19] The new college was composed of three schools: medicine, dentistry and pharmacy. The University College of Medicine was destined to have a life span of only twenty years as an independent institution. The Flexner Report of 1909 suggested that the two schools would be better off merging, which they then did in 1913, retaining the Medical College of Virginia name.[20]

Dr. Christopher Tompkins said in a talk as he was retiring from being the Dean in 1913, ”From a school whose matriculants numbered, as I can remember it, 22 during the session and whose standing amongst medical colleges in the country was so insignificant that it was not worth noticing, the matriculants have increased to – in one sessions – as many as 306. In a recent table compiled December 1911, from the reports of the Council on Medical Education of the American Medical Association, it was found that of all the medical colleges in the United States and taking them in the order in which their graduates passed the various medical examining boards, the Medical College of Virginia stood fourth; the order in which they came being, (1) Ruse, (2) John Hopkins, (3) Cornell, (4) Medical College of Virginia, and about one hundred and forty behind them.”[21]

The year 1920 revived a discussion that had gone on for years without resolution of the issues involved. Repeatedly, the view had been expressed that the Medical College of Virginia and the University of Virginia Department of Medicine might well be consolidated with benefit both to the schools and to the public. In 1867, 1905, and 1913 the question emerged, and, finally, in 1920 a really serious study was undertaken. In reviewing appropriations. Governor Westmoreland Davis noted that Virginia was supporting two medical schools, seemingly in competition and surmised that this might well be uneconomic, particularly at a time when money was tight. Acting on the Governor's recommendation, the General Assembly authorized a Commission on Medical Education. The Commission made a thorough study. It recommended that Virginia support only one medical school, that this school be in Richmond, and that it be the Department of Medicine of the University of Virginia under the full and sole control of the Rector and Visitors of the University, and, finally, that the plan be effective upon the unconditional transfer of all Medical College of Virginia properties and assets to the Rector and Visitors of the University. The Board of Visitors of the Medical College of Virginia was in favor and by resolution determined that the College would willingly embrace the plan should the Commission's recommendations be accepted by the Legislature. Instead, the alumni of the University under the leadership of the eminent Dr. Hugh Young of Johns Hopkins Medical School waged a mighty campaign to preserve the medical school in status quo at Charlottesville. The report was approved overwhelmingly in the House, but died by a 24-16 tally in the Senate. In view of the state's growth, the action of the Senate was most fortunate. Had the report won approval, Virginia would have found herself today facing the organization of another medical school with a minimum price tag of 30 million dollars. The issue was to rise again in 1947, but only briefly, as the handwriting on the wall was by that time quite clear.[22]

The Great Depression and Expansion

The Great Depression struck the College with perhaps more force than in the case of some other institutions; for MCV was struggling desperately to secure funds without which highly specialized structures and highly talented and trained personnel, both expensive, simply could not be had. Plans laid prior to 1930 with early fruition apparently possible had to be put aside, notably the projected laboratory and outpatient building. Salaries, never high, had to be cut.[23] By 1941, the modern 600-bed, 18- story MCV Hospital was completed; the Egyptian Building had been completely reconstructed to provide up-to date facilities for the departments of bacteriology and pathology, and the 300-seat Simon Baruch Auditorium in the Egyptian motif, named for Dr. Simon Baruch, class of 1862, whose distinguished son, Bernard M. Baruch, helped make the restoration possible. Also by 1941, new quarters were provided for the departments of physiology and pharmacology by adding a fourth story to McGuire Hall. In the brief span of five years, a truly magnificent and unprecedented program of physical expansion had been completed. A few muttered about excessive emphasis on bricks and mortar, but those who faced facts realized that modern education in the complex health fields cannot be conducted a la Mark Hopkins. Colleges are people, but the most talented students and the ablest faculty are helpless without adequate buildings and proper equipment! [24]

The interest of individuals, organizations, and agencies, other than those of the Commonwealth, may be gauged by their provision, since 1956, of gifts, grants, and contracts for teaching, research, and capital improvements totaling a little over $15 million. Reflecting the stimulating influence of such support, the College is fully accredited, with University status, and alive with enthusiasm, as the faculty and staff go about their mission of providing for the education of some 1200 students enrolled in 10 schools and courses, plus some 200 young physicians in residence for further training, of caring for the sick who occupy its 1308 beds, and finally, of seeking new knowledge for their benefit. [25] The $6,500,000 Medical Education Building was completed in the summer of 1963. It was the most important addition to the physical plant of the College since the completion of the Medical College of Virginia Hospital in 1940. With the added facilities of this building, the school of medicine was able to increase enrollment from 84 to 128 students.[26]

At the 1969 convocation for VCU, Dr. Brandt envisioned a great urban University, stating, "we are caught up in a thing you might call the Virginia Commonwealth University Idea. It's an exciting concept....an academic approach without precedent, VCU will become a name that will mean a great deal to you in years to come...as one of the leading educational institutions."[27]

The previous administration led by President Eugene P. Trani had pursued a policy of promoting the VCU name as a unified identity to the outside world. This policy had included directing faculty, staff and students to use the VCU name instead of MCV in any official meetings or correspondence. This was accomplished by first the creation of the MCV Hospital Authority, ostensibly to better administer the MCV Hospitals, to a later name change of this Authority to the VCU Health System Authority (with MCV Hospitals being a component thereof). This Authority under the direction of Sheldin Retchin, MD then went about changing the physical appearance of the structures and advertising materials, to include letter head and websites. The faculty and medical students at that time were instructed at that time to cease referring to the instition as the medical college of virginia. The main cited evidence for this was mis-representation of the insitution in the press. Dr Retchin in 2004 sent an e-mail that described a 2003 front-page USA Today article which incorrectly referred to MCV as the "Virginia Medical College, a teaching arm of the University of Virginia," when in fact MCV is not a part of the University of Virginia. The VCU Medical Center now resides on the MCV Campus of Virginia Commonwealth University. Since that time, the schools of that institution have been listed as a part of the VCU Medical Center versus as a part of a university.

VCU expanded its research programs significantly over the past decade and has over $255 million in sponsored research. In 2010, VCU was selected by the NIH for a $20 million grant to become part of a nationwide consortium of research institutions working to turn laboratory discoveries into treatments for patients.[28]

Finished in 1845, the first MCV building was built in the Egyptian-revival style 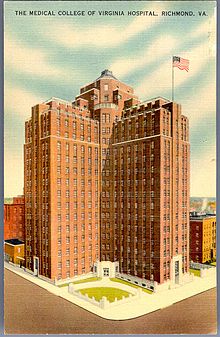 The Egyptian Building at the VCU Medical Center