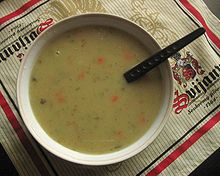 Some fresh cucumber soups are just a blend of ingredients (cucumber, spices, other vegetables or fruits, etc.) served cold, others are cooked, possibly in some kind of broth, and served either hot or chilled.

It is a traditional Polish soup (Polish: (

Zupa ogórkowa (help·info) sometimes simply ogórkowa). It is made from sour, salted cucumbers and potato. Occasionally rice is substituted for the potatoes.