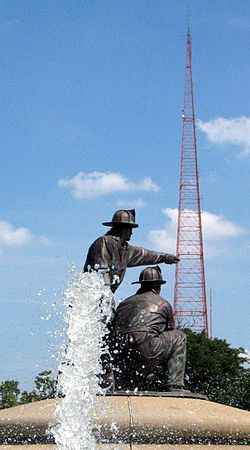 Landmark KCTV-TV tower on 31st Street on Union Hill, with the Firefighters Fountain in foreground.

Kansas City is the 31st largest television media market in the United States (as ranked by Nielsen[1]), and has several television stations, as follows:

Much of the Kansas City area is served by Time Warner Cable, with some Kansas and Missouri suburbs served by Comcast. Sections of South Kansas City and some Kansas suburbs are also served by Everest. Additionally, parts of western Wyandotte County are served by Sunflower Broadband based out of Lawrence, Kansas.

1 KMJK has applied to change their city of license to North Kansas City, Missouri.

2 KCKC switches to an all-holiday format during the months of November and December.

Notable personalities who worked in the market